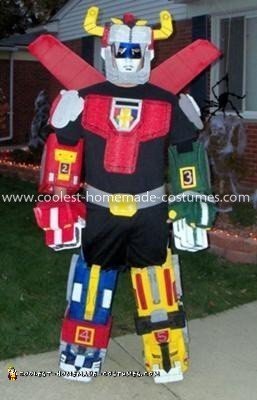 So, everyone has a certain toy that they loved growing up and mine, like so many others was Voltron. I still have one of my original die-cast lions, and about 2 months ago, my 5 and 7 y.o. boys were asking me what it was. I explained to them that it was like the power rangers’ grandpa and the transformers all rolled into one. Of course, they thought it was pretty cool, and so I decided that I would make a full size version to let them see just how cool it really was.

I am a shop foreman by trade, and I have a love for building and making things out of whatever I can. We happened to be working on some items that each contained 4 pieces of mdpe foam, about 4″ x 8″ x 1.5″. As soon as I saw how much we were going to have to throw away, I immediately took the opportunity to use it as the material to make the costume with.

I boxed up about 3 cubic yards of the blocks, took it home to my garage, and after the fun and almost daunting task of explaining to my wife how awesome this was going to be, I took my handy 3m super 77 spray glue and got to work.

Over the next few nights after work, I was able to construct the first leg (blue lion) in it’s basic form and I then realized that not only was this totally do-able, but it was a great way to get my kids to see that you can have fun and be creative even as an adult.

Gluing and cutting the oddly shaped blocks created a unique challenge in making something that has to fit a 230lb guy. I needed it to hold together with me walking in it, and polyethylene does not exactly take well to most adhesives, but I was determined to use what I had and not spend too much money. I always tell my kids “it’s not fun if its not hard” and I had to set a good example after all.

My solution was using 1/16″ spring-steel rods that I sanded rough, and I inserted them down the legs. After letting it all set up and cure, I wrapped the legs with an ldpe sheet, cut to fit, to hold it all solid. This technique worked, but I would definitely modify it if I was to ever do this again.

Paint and final assembly was easy, as Krylon and screws became my best friend. I also used quite a few permanent markers and ruined my wife’s’ good kitchen shears and paring knife (shhh).

Needless to say, when my kids would come out and check on my progress, they were ecstatic. They wanted to try it on and see the show and everyone became obsessed. It was really a great project all around. 40 hours and lots of cuts and sticky fingers later, I was done. I know it isn’t perfect, but it cost me $36 and I had fun. Enjoy the pix. 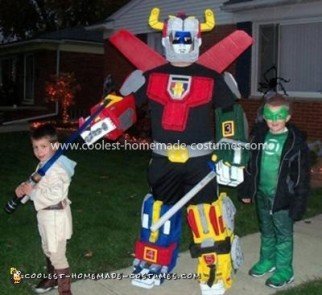 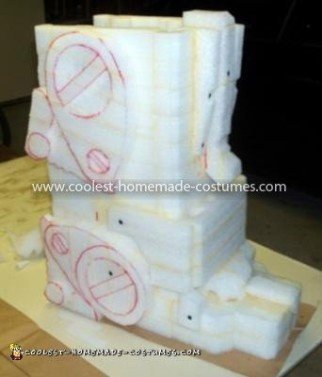