Already an accomplished artist as a child, Marisol loves to draw new characters. Suddenly, about a month ago, paper became secondary to foam! She would disappear into the basement work room on weekends and go to town with the hot glue gun. About 5 hours later, she would emerge, parading the new character head she designed. Then, she would quickly begin work on the paws, feet, and tail. What motivated her was getting the chance to wear it in public. Her goal was simply to make people smile. A tad shy usually, I didn’t expect Marisol to be brave enough to wear it just anywhere.  Well, inside that costume, there must be a pretty outgoing little girl. In one month’s time since she made the three costumes, she has worn them to two football games, Petsmart, the mall, a comic book store, and Walmart.  It’s fun to see how the public reacts. The reactions are overwhelmingly positive. Little kids adore her and adults constantly want to take “selfies” with her. While Marisol says she would never want to take a babysitting  job, you should see her around kids in these costumes. She will give a toddler high fives and hugs all day long. She loves “being in character” when she takes on the “fursona” of the character she created. Though she disappointingly caught the flu on Halloween and wasn’t able to trick-or-treat in her new costume too much, she plans to make up for it by attending the the upcoming “Furry Convention in Atlanta in April 2015 (yes, they really have such a thing!), where many more furry costume creators like her will share their talent. In the meantime, here’s to hoping she makes mascot try-outs at her high school!

Instructions for making the character costume:

1)   The head: 2” upholstery foam is first formed into a bucket-shape to fit the size of the wearer’s head.  Additional pieces of foam are hot-glued into place in layers to create the “sculpting” of the face.  “Follow-me” eyes are cut out of thin craft foam and plastic mesh, and glued into place. Duct Tape is placed all over the head. The tape is marked as to its placement areas, then removed to be used as patterns for the fabric/fur. Once the fur is cut out using the tape patterns, it is glued onto the head. A tongue and teeth, also constructed of foam are added to a cool hinged jaw that moves when she talks.

2)  Paws:  Next, she makes fur gloves with stuffed paw pads. Marisol traces her hands onto the back side of the fur fabric with a marker, then cuts it out and sews it together. She then glues and stuffs a bit of felt on the palm side to create paw pads.

3)  Tail:  The tail is made from additional fur, and is sewn and stuffed. A loop is sewn on to the top of the tail. It then simply slides over a belt, to stay in place with blue jeans.

4)  Feet:  Lastly, she buys a cheap pair of tennis shoes and covers them with layers of sculpted foam and fur to complete the costume. 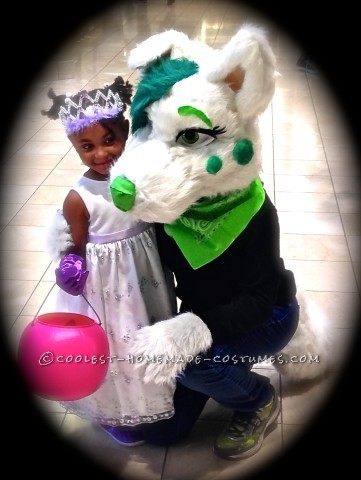