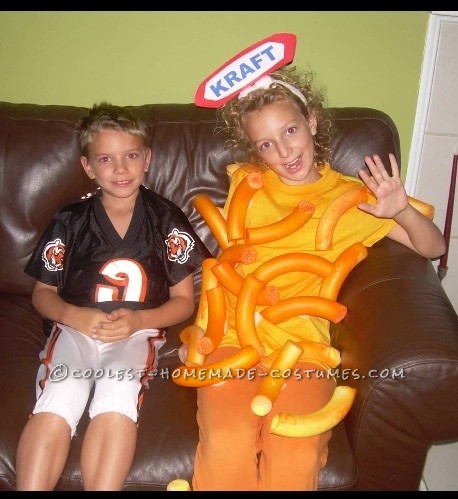 So what you’re seeing here is NOT JUST a store-bought football uniform. Digging deep into my creative depths I had to use up to THREE safety pins to adjust the jersey for a slightly better fit. Reactions to the Mac-n-Cheese costume you ask? “Mommmmm, it’s still too big!” Oh wait, you probably didn’t mean the wearer’s reaction.

While I’ve got you here, I might as well mention my Mac & Cheese obsessed, you-are-what-you-eat, daughter. Coming up with the idea was just natural, as it is almost literally the only thing she eats. I originally intended to use actual noodles and stick them to an outfit, but in a mixture of 4% genius, 96% laziness, and 50% extra percentage, I came up with a way to make the noodles a lot bigger. I bought those round white Styrofoam wreath forms (8” rounded edge, not the squared edge), cut them into fourths, and spray painted them yellow and orange. If you’re going for the ‘Oh-crap-I-left-the-noodles-on the-stove! look, then the 6” wreath will make them appear bigger and overcooked.

Knowing she’d be sitting at school for hours, I made the noodles easy to remove so she could take off the ones on her back. Unfortunately, it was also easy for fellow students to remove them. (Cretins!) To do this, I used fabric glue (Fabri-Tac) to adhere Velcro dots randomly to yellow pants and a T-shirt that I spray-painted with orange highlights. I then glued the other Velcro dots to the “noodles.” The Velcro also enables us to re-use the noodles by attaching it to bigger clothes through the years as she grows, because did I mention, I am also 78% cheap-o?

The ‘Kraft’ sign was an old headband that I covered with white felt, printed the logo, and mounted on a couple layers of red construction paper. I did the same for the back, so the logo was on both sides. I then stuck a Popsicle stick in between the two logos, duct taped it to the headband, and covered it with more white felt. Since I didn’t want to ruin a good headband that she still wears, I grabbed an old one that hadn’t been worn in years. It turns out it hadn’t been worn in years because it was RIDICULOUSLY small!  (My genius just dropped to 3%, didn’t it?) So, after all of my effort, and after I took a couple pictures, if you add up all the minutes the logo headband was actually worn… hmm, let’s see, carry the 2,… it’s a sum total of zero minutes and zero seconds. Minus the headband, it was comfortable enough to wear to school. Only three noodles had bite marks by day’s end. (Brats!)

I was glad to see that everyone who saw the costume immediately knew that it was macaroni and cheese. I’m pretty sure that they said a lot of, “You look so adorable!” and, “You are so precious!” and, “You look so awesome!” I read between the lines, and heard the following: “Your mom is the most clever person in the universe!” and, “Your mom made the best costume ever made in the history of costume making by any costume maker…EVER!”  She and I are still hearing from those who saw the costume as well as those who only heard about it, how creative I, umm, I mean, the costume was. 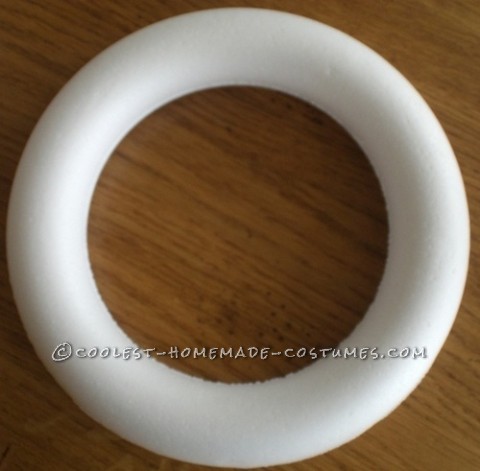