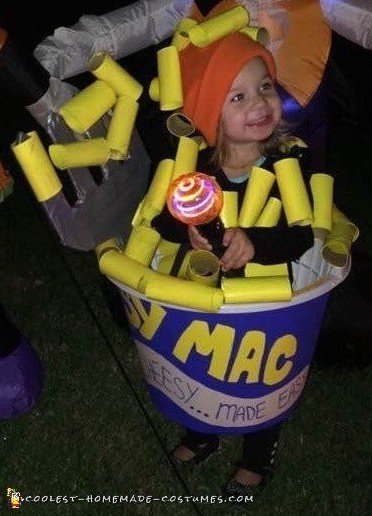 Madi, my almost 2 yr old granddaughter and only grandchild, transformed into a macaroni and cheese costume. In my opinion homemade costumes are the best, most cost effective and most appreciated. Homemade costumes always make the best memorable moments as well.

Making the Macaroni and Cheese Costume

Madi loves macaroni and cheese so we decided to make her a bowl of mac ‘n cheese. I knew it would be so adorable once we were finished with it and put it on. I couldn’t wait to see that sweet baby in that costume.

We first saved toilet paper and paper towel rolls to use for the noodles. Then, we spray painted all of the rolls yellow then hot glued them on the shirt, hat and bowl. We used a small clothes basket for the bowl. Poster board was hand painted, hand detailed and cut to fit around the basket to form the bowl. Ribbon was used as suspenders to hold it on her shoulders. Cardboard wrapped in gray tape was used for the fork then hot glued more noodles onto the fork.

Modeling the Mac and Cheese Costume

We are very rural so we traveled to a nearby subdivision to take Madi trick or treating. It was a very warm Halloween for the Midwest. We had to dress her in her homemade costume once we arrived since of course she couldn’t wear it while in a car seat. She was excited and ready to go. She is a very independent toddler. As we walked from house to house she would say ” trick or treat”, “thank you” when she got a treat then “Happy Halloween”. She would also tell others she was mac and cheese.

It was such a fun DIY costume to make and was a huge success. So many compliments from the very young to older folks. Many took pictures and stated it was the best costume of the night. It will definitely be a memory I will never forget and get to talk to her about when she gets older and show her the pictures.

Highlight of the night was when we were finished got back to the vehicle and took off her costume. Her shirt with the noodles attached was the last to come off. Once her shirt was off she says “I’m Free”. It was hilarious. Only out of the mouth of babes.

2016 Halloween was the best yet. I look forward to many more with Madi and maybe even more grandchildren in the future! 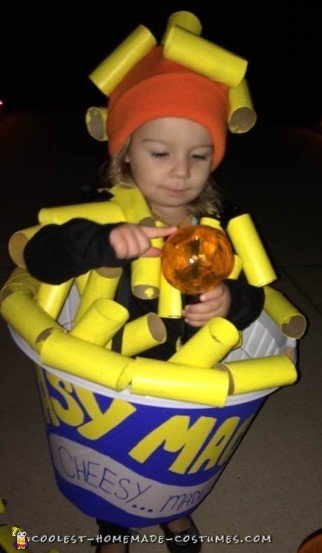 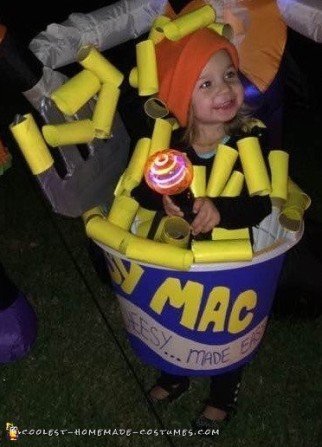 Cool Mac-n-Cheese Costume for Any Age