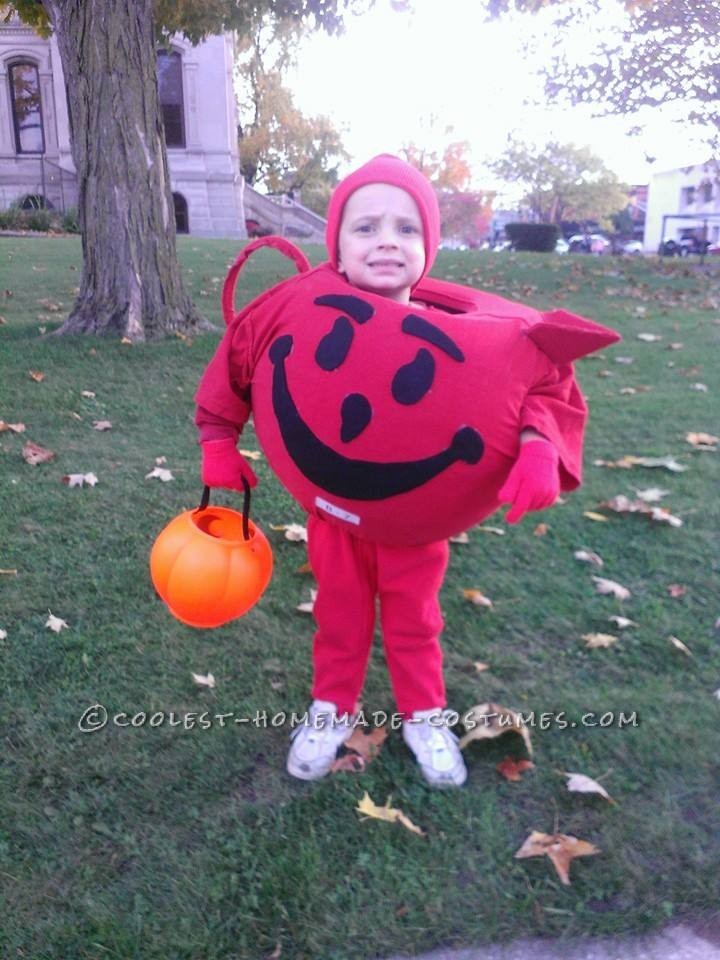 It was very difficult to come up with this idea!  I would have never came up with the idea myself, but I saw the idea for it online and as soon as I saw it, I knew it was the perfect costume for my son and we weren’t going to see another one while we were out.

I started the costume by purchasing a very large rubber ball.  Then came the worst part!  7 layers of pape rmache.  I have never really used paper mache before and thought how hard can it be?  It wasn’t hard, but it was the messiest thing I have ever done and wanted to be done after I got the first layer on, so needless to say it took me well over a week to get around to getting all 7 layers done.  A tip I learned was to do layers in alternating paper.  I used a layer of news paper and then a layer of construction paper, so I could tell my layers apart and was sure to cover every spot with every layer.

Once the paper mache had completely dried about 5 days, I began figuring out how I was going to make it red.  At first I was going to paint it, but I didn’t want the lines of the paper to show through the paint.  I decided fabric would work better.  I was originally going to cut up some old red t-shirts to cover it, but once I managed to get a red shirt over it, I decided it would work perfectly and I didn’t need to cut anything.  I took the shirt back off, popped the ball, and cut some off of the top and the bottom big enough for my 3 year old son to fit through and then cut arm wholes.  Luckily when I put the shirt back over it the sleeves of the the t-shirt matched up perfectly with the arm wholes I cut.  The dilemma was that as it was one of my husband’s t-shirts it was too long, so I cut some of the fabric off of the bottom, but left some over hanging.  I then pulled the extra material I left up in the bottom and hot glued it to secure it in place.

I cut the spout out of cardboard and covered it with some of the extra material I had cut off using hot glue.  I then attached the spout using hot glue.  It was very difficult to come up with the handle.  I first tried cardboard, but I couldn’t get it the right shape.  I must have brainstormed for a few days trying to figure it out.  I was in the garage on day talking to my husband when I saw a metal towel hanger laying on his work bench.  I picked it up and began to bend it in the shape of a handle and it was perfect!  I then covered it in more of the leftover material using hot glue.  Attaching it was a little tricky, but my husband drilled 2 holes in the body and we put each end of the handle through and bent them so that the ends would not pull back through.

The face: I drew out the shape of the eyes, nose, mouth, and eyebrows on black fleece, cut them out, and used hot glue to secure them on.

With the t-shirt around it, it pretty much held itself in place, but it was a little bulky for my son, so we used a pair of suspenders hooked to the bottom on the inside of the front and back to secure it on him.

I absolutely love this costume, but it was a lot of work to make!  This costume won in a local costume contest. 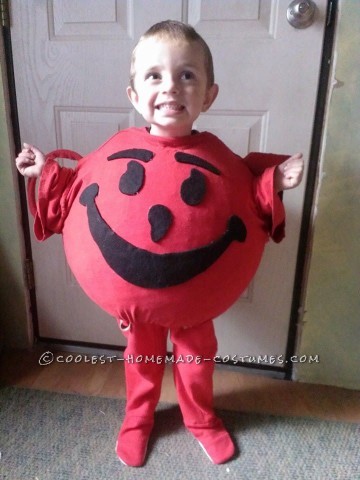 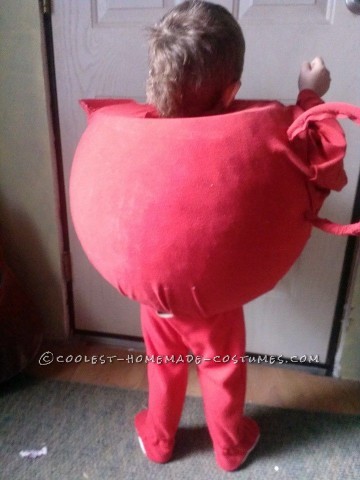 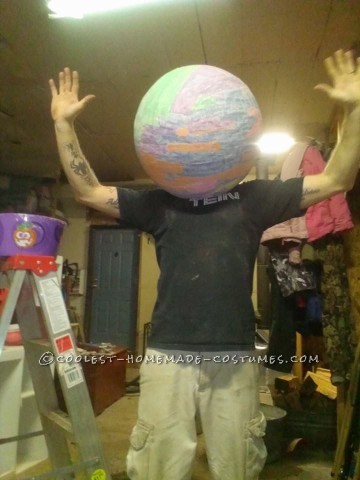