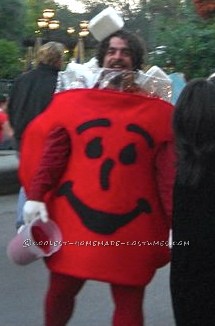 Every family seems to have that one member who can never come up with a costume idea until the last minute.  Then when they finally come up with their idea (it is usually unique since they have been spending so much time thinking about it) they have no time to actually make it happen successfully.  My younger brother was always that special family member.  One morning before school he tried making himself a knight in shining armor with aluminum foil.  He didn’t make it to the car without it falling apart.  Then one year he tried the classic mummy after spending the hour before school shredding an old sheet and putting lipstick on it for the blood affect.  He walked around school leaving trails of his costume.  I was a quiet child and would spend my Halloween mornings watching my brother wrestle unsuccessfully with his costume feeling sorry for him.  Now that we’re in our 30’s and I’ve learned to sew, I’ve made him my priority for giving him the Halloween costume of his dreams.  For the past 3 years sometime during the summer he has proclaimed his dream of what he wants to be for Halloween.  I listen casually pertending I’m not paying much attention while I’m planning his costume in my head.  Well, a couple of years ago he was laughing about how cool it would be to be the Kool AId Man.  He talked about how he could walk all over town yelling out “oh yeah” just like in the commercials in the 1980’s when we were kids.  I had to make up for yet another one of his Halloweens gone bad as a child.  He would be the Kool Aid Man.  I knew I needed a lot of fabric with some body to it so I chose good old felt.  I really wanted to make him round so I set out to Home Depot and walked around and around trying to find things that may work…fencing, plastic tubing, molding, piping and all kinds of odds and ends that I didn’t even know what they were!  My plan was to make some kind of sphere somehow.  I ended up using drop clothes and plastic tubes to make kinda like a hoop skirt that was smaller at the top and bottom and wider in the middle.  It actually didn’t look all that bad.  However, after a few days of making a mess of my house and wasting money on a bunch of man supplies I realized that if I made him a sphere shape he couldn’t go on the rides at a particular theme park that we were going to for a Halloween party!  So I was forced to go for a flat and wide shape that he could easily sit in.  I put clear vinyl around his head like the top of a pitcher and foam ice cubes all around his neck and even one on a headband he wore on his head.  Once he found out I made him a Kool Aid Man costume he was so excited and yelling through my mom’s house “oh yeah!” he exclaimed, “oh man, I need red tights”.  I searched for thick tights from dance supply stores that would fit him (that actually tool a while) and then I dyed them red.  He wanted gloves too and to hold a pitcher just like the real Kool Aid Man.  Well, my brother ended up with the best costume, and I watched smiling and feeling happy on Halloween. He had a gas at the theme park Halloween Party yelling “Oh Yeah!” until we all wanted to put one of his ice cubes in his mouth!  Our highlight was when a little girl about 7 years old asked to get her picture with him.  She looked up at him with big, dreamy eyes as if he was one of the theme park characters, and my brother let out a heartfelt belly chuckle when she squeezed his leg and gave him a hug.  He was the Kool Aid Man.  At the end of the night when we said our goodbyes and he was still flying high with excitement he laughed, ” What can I be next year, sister?”

2.  Lay on top of it so you can determine how tall and wide you want it.  Remember, the Kool Aid Man is a round pitcher, so make it circular.

3.  Draw your shape with a marker and cut along your markings.  Determine where you want your arms to stick out and mark.

4.  Sew or use a glue gun to attach the front to the back at the shoulders and along the sides leaving the head area and bottom open.

5. Fold a large piece of white felt in half.  Draw a shape of a handle.  Cut along drawn lines.  You can either stuff it with stuffing or put a stiff piece of card board in the middle so it can hold it’s shape.  Sew or use a glue gun to attach front to back.  Sew onto the red pitcher.

1.Get some clear vinyl and fold in half lenthwise so you have a long rectangle.  This will be your “collar”.

2.  Sew your vinyl around the opening where your head goes with the folded side up.

3.  Get some foam cubes and hot glue some inside your vinyl collar and also glue one on top of a headband.  This will make it look like you have ice at the top of your pitcher so your head will be surrounded by ice.

To complete the look you will need:

-a clear pitcher to hold.  You can add some red construction paper on the inside to look like Kool Aid. 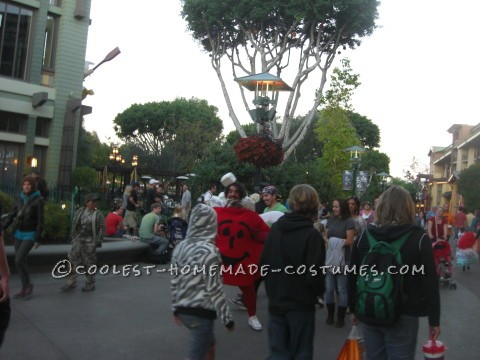 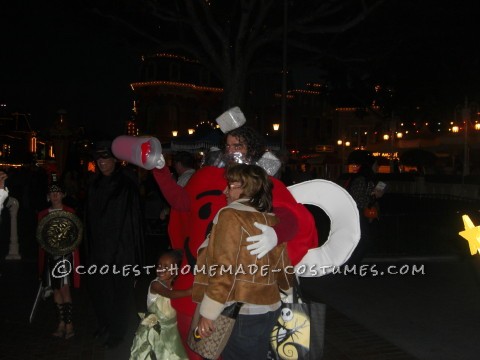 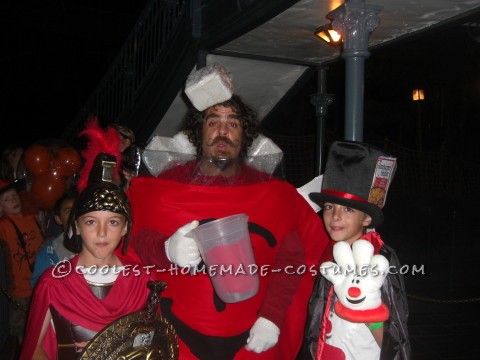 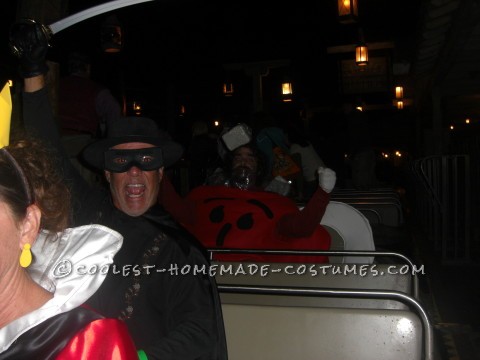 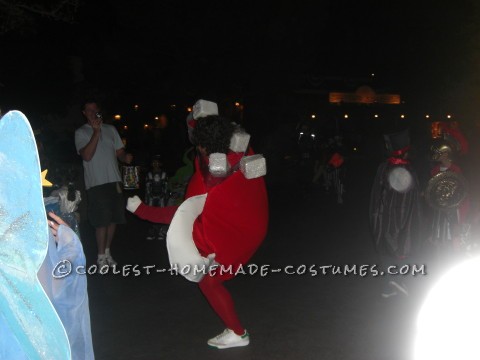