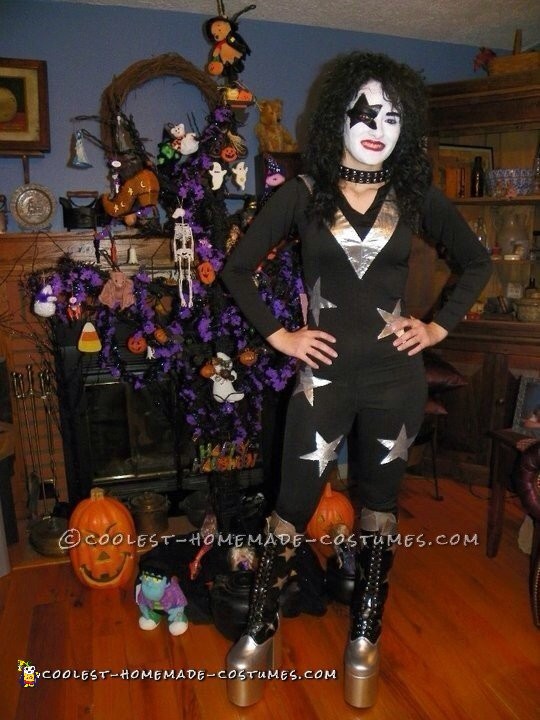 I’ve always been a fan of KISS ever since I was a small child & found Destroyer on vinyl in my grandfathers collection. So it was an easy decision for me to become Paul Stanley for Halloween. I looked online for weeks and every costume I found for females were extremely revealing and were not nearly authentic enough for my taste, so I decided to use my aunts expertise in sewing and my creative designing abilities to make my own costume. So my aunt & I went shopping for the materials we would need.

Black spandex, zippers, silver fabrics, and LOTS of different accessories. we took apart an old dance jumpsuit of mine to get the size and shape we would need for the black spandex to become the starchild’s signature jumpsuit and began creating it in my size. We cut a v-neck into the costume enough to show the effect of Paul’s original costume but high enough to keep from being racy.

Then came the hard part, the stars. Now we thought it’d be easy to make the stars after an already failed attempt on iron on patch versions, but the material we had would fray like crazy when you would cut it and it was a three week project just getting the stars cut and sewn on. The idea of the silver exaggerated v-neck was my aunts and I really think it helped add a more authentic open chested look like the original had. For the necklace I tried different chokers and ended up getting a studded dog collar and cut & sewed a Velcro strip to fit my neck. For the wig i reused my moms wig from a Nikki Sixx costume.

For my makeup I used old white clown makeup, black eyeliner (the kind that comes in a little jar with a brush), and red lipstick. The only thing I actually bought that was officially licensed KISS merch was the shoes, which were so hard to find in women’s sizes that I ended up buying the smallest men’s size i could and filled the extra space with cotton balls.

The final product was more than worth the almost 4 months of work on the costume. I got so many compliments, including “I didn’t know there was a girl in KISS” from a young boy. It was a great success taking my nephew out trick or treating and later at a party, and for once in my life I was actually tall thanks to the nearly seven inch platform heels! 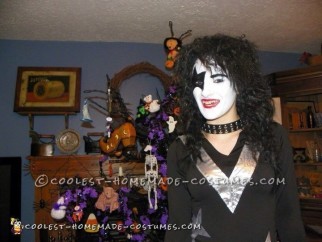