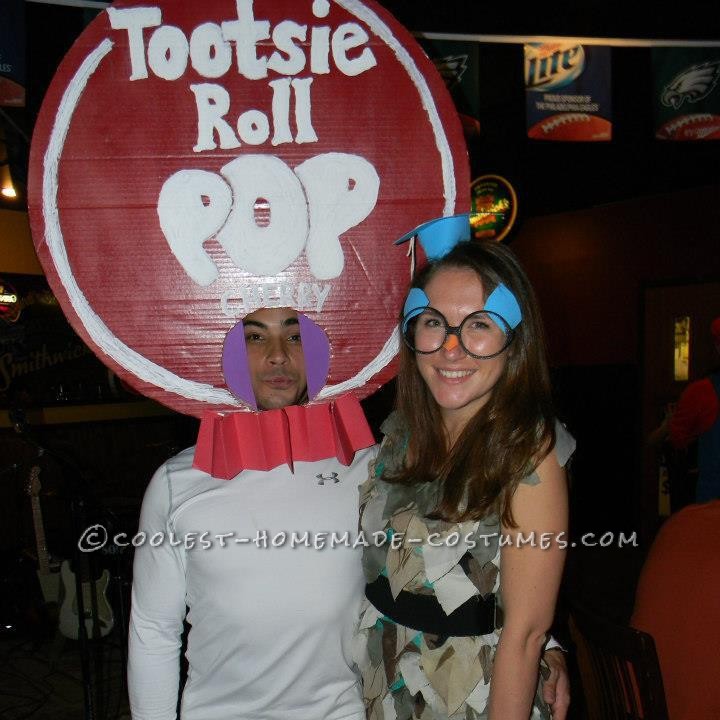 The Mr. Owl Tootsie Pop commercial is such a memorable commercial for those of us born between the 60’s and the 80’s. Resurrecting this character and his love of lollipops in the form of a couple’s costume delighted fellow party-goers with it’s humor, nostalgia, and flirtatious spin. It also brought me a 1st place title in the costume contest and a $25 visa gift card!  For those with little ones, there is definitely room to really up the adorable factor by recreating the other characters from the commercial like the little boy, the fox, and the turtle.

This costume was put together in the two nights prior to the Halloween party… a bit last minute!  Our Tootsie Pop dressed from neck to feet in white to resemble a lollipop stick.  His lollipop head was crafted from shipping box cardboard that was cut into two perfect circles using my overturned coffee table as a stencil. A layer of white spray paint would have provided a good base, but I started right away by applying a few layers of red spray paint to the two brown cardboard circles. I guess this worked out in the end, because the final color did resemble the vintage cherry tootsie pop wrapper.

Once the paint dried, I measured the amount of space required for Mr. Tootsie Pop to fit just his face through the cardboard. I cut this amount of space into the cardboard circle that would serve as the front piece of the lollipop. Next, I free-hand drew the graphics onto the front piece with pencil. Once the graphics looked relatively balanced, I painted them with white craft paint. To attach the front and back pieces of cardboard to Mr. Tootsie Pop’s head, I created a makeshift headdress by cutting the foot off a pair of stockings (think of robbers holding up a convenience store with stockings over their heads).  I then cut a small circle in this stocking foot that when stretched, would snugly accommodate Mr. Tootsie Pop’s face and under his jaw.  I then attached the front and back circles to the headdress by means I can’t now recall, but it definitely involved hot gluing the perimeter of the cardboard face opening to the perimeter of the stocking face opening.  Final touches for Mr. Tootsie pop entailed bridging the gap between the front and back circles’ circumference with red construction paper and using that same paper folded like an accordion to create the wrapper “twist” at Mr. Tootsie Pop’s neck.

Ms. Owl was structurally a lot more simple!  An old dress served as a base to which “feathers” cut out of old brown and beige sheets were hot-glued in overlapping layers. LARGE, black round-rimmed glasses are a must and shouldn’t be too hard to find at the Halloween store. I needed to spray paint the ones I found black. Two foam paper ears were glued to the outer rims of the glasses.  The miniature professor cap was made of two pieces of foam paper- one long and thin (the circular base of the hat) and another square (the brim or top of the hat).  The long thing piece was formed into a cylinder with glue.  The brim was laid flat atop the base and adhered from the inside using glue and attaching pieces. I found gluing the hat to a headband was the most secure way to keep it on my head. Finally, threads of yarn were run through the middle of the top of the hat with a needle to give the hat that academic tassel that every intelligent, Ms. Owl requires! At the party, I carried a basket of tootsie pops to give out, which were surprisingly popular given that candy has come a long way since the 80’s!

Hope other’s try this fun costume and enjoy the game of cat and mouse (or owl and tootsie pop) you can play with your date!