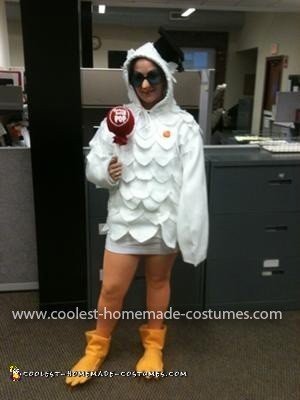 This Homemade Tootsie Pop Owl Costume was so fun to be. I had a great time making it, wearing it and handing out tootsie pops all day in it. I used an oversized white hoodie for my body, and covered it in hand cut white felt “feathers”. I used two long wing shaped pieces of felt on each arm for my wings (I made sure to spare the hoodie pocket, so I could stuff it with tootsie pops to hand out).

I already had a white stretch mini skirt for my bottom half. I created the graduation hat with cardboard by cutting a square out for the top and a strip of cardboard (glued with it’s ends together) for the bottom piece. I covered the felt via hot glue, then pieced it together and topped it off with a button smack in the middle to hold the homemade tassel. Once that was complete, I glued it right onto the top of my hood.

For my glasses, I bought a pair of ginormous gold doctors glasses from a Halloween store, popped out the lenses, painted them black, glued on a beak and super glued white cellophane circles to it, viola!

Orange tights were purchased from the Halloween store, and I completed the legs by creating bird feet out of orange felt, stuffing and some old flats. I drew out a pattern for bird shaped feet (cut out two for each foot). Starting with the toes, I hot glued them together, stuffed them them with stuffing and wrapped/glued the rest of the felt around the shoe. It molded very nicely. Then I added a cuff to each foot to make it look cute.

I also made a big tootsie pop, made with spare red fabric from home, white acrylic paint a wooden dowel and a Styrofoam ball. I paint the tootsie pop logo on the fabric, and painted the dowel white. Once they both were dry, I pieced it all together. Ta-da! Such fun to be the tootsie pop owl. 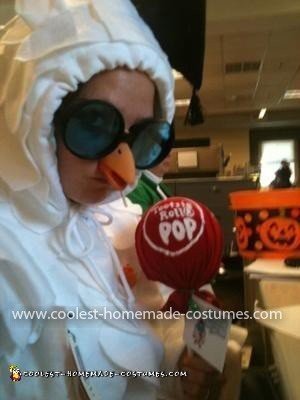