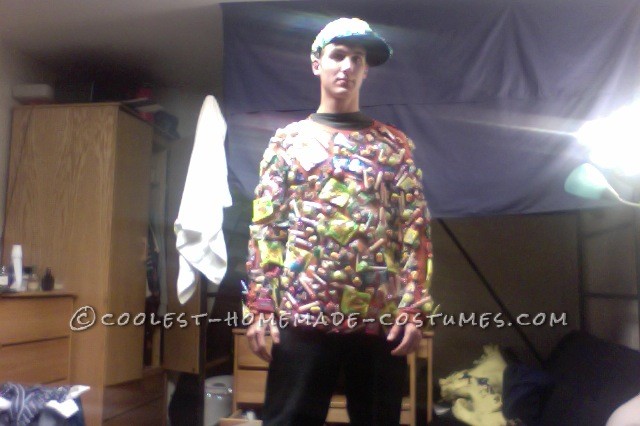 Honestly, it just came to me in an epiphany. I just thought to myself, “Hey, how cool would it be to just glue candy all over a t-shirt  and an old hat and go as ‘The Candy Man?'” So, I went to my local Wal-mart, bought a really cheap long sleeved shirt, and two HUGE bags of candy. At first I started by trying Elmer’s glue to get the candy to stick to the shirt but that wasn’t working well. So, I went back out and got a hot glue gun which I figured would do the trick. Sure enough, it did work!

A fair warning to all those trying to re-create this costume. If you want it to look good, gluing hundreds of pieces of candy WILL TAKE A LONG TIME! The gluing for me took somewhere around an hour. It was such a hit though, that I didn’t mind re-gluing for the next night which took another hour. Also, this costume can be quite heavy! Two jumbo bags of candy can make this costume feel like you’re wearing a suit of armor!

The realization of how awesome it truly was happened at the bus stop on the way to our first party on the Friday of Halloween weekend. Once I got there EVERYONE was eying me. Sure, it may have been because I had candy all over my body. But nonetheless, it’s always nice to be the center of attention every once in a while! And all it took was one guy to come up and ask for a piece of candy and moments later what seemed a sea of people were plucking candy off my shirt.

So, as the night went on more and more awesome things happened. Imagine, any party you want to get into, you were in. Getting to the keg if it’s crowded… not a problem! Everyone is looking at you and asking for candy. Of course being the nice guy I am, I’d let anyone pick off a piece or two! But as we all know, a lot of hungry drunk students in a party means  by the end of the night, you’re no longer the “Candy Man.” You’re just… “Man.” But those Friday and Saturday nights were the best nights of my life and should you do this, they just might be yours too.

To make the Candy Man costume you will only need:

– One hot glue gun with some glue sticks

– One old (no longer worn) hat

– Other accessories that haven’t been used in a while to glue candy onto (be creative!)

– Take candy out of bag

– Glue the candy onto the shirt (maybe spell something with the candy or any other cool ideas you have!) 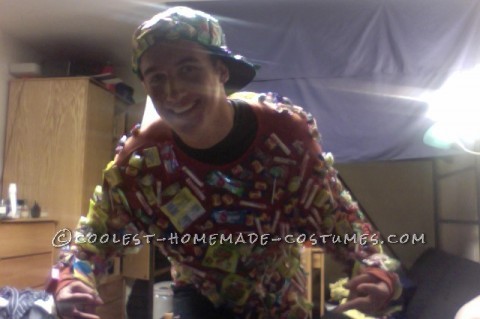