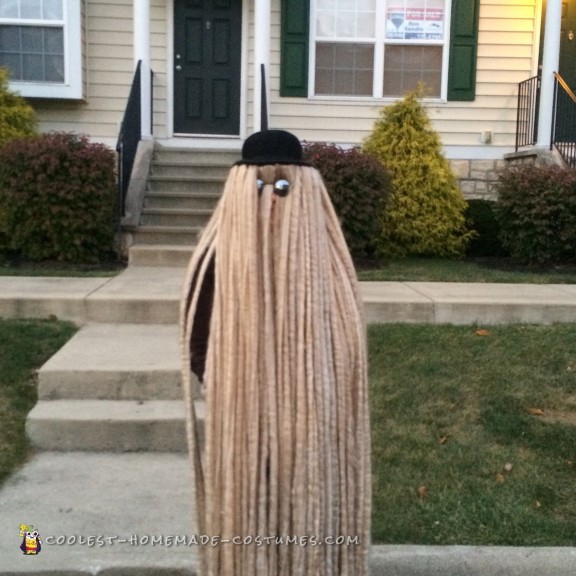 I always loved Cousin Itt from the Addams Family as a kid. I thought he was so cool because he didn’t speak any words you could understand but he was still very popular. This year as I thought what costume would be fun to wear and instantly I thought well I love Cousin Itt so I will just make the costume. I didn’t realize at the time just how involved it would be to accomplish this task.

I went to the local craft store in search of hair but to no avail. When I had lost almost all hope I found scarf yarn on sale. I asked the clerk if she thought this would comb out to resemble hair and while she looked at me like I had lost my mind she said I am sure it will but why do you ask? I said I am making Cousin Itt this year and the hair needs to be just right! She said that will be a cool costume buy them all. So I purchased the five spools of yarn and went home to begin my costume.

I measured the yarn into five foot individual strands and then I began to comb the yarn. I combed before work, at the doctor’s office, during lunch, waiting for dinner, and even before bed. When everyone would ask what are you doing I would say making hair! After two long weeks I had all the hair for the costume. I found a 100 year old hat and knew it was perfect. The hardest part was gluing the hair to the hat. It took me five days and many burnt fingers to hot glue the hair to the hat!

Now the only thing missing were the sunglasses. I found them online and patiently waited for them to arrive. It took three days but they finally made it and the costume was complete. Now time for the ultimate test – the Halloween party. Being five foot four and a half inches made me the perfect height for Cousin Itt. I made my grand entrance to the Halloween party and was an instant hit. People loved the costume so much that I spent most of the night posing in pictures with everyone at the party!