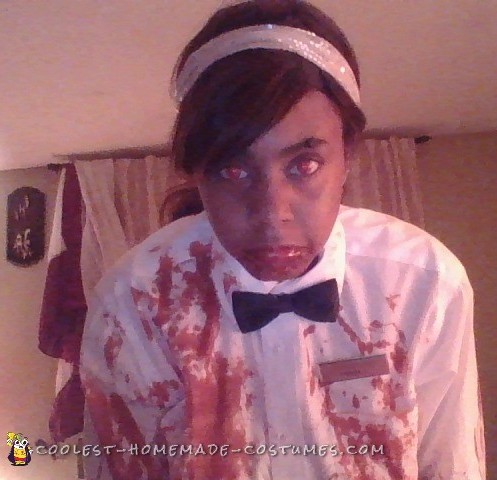 My fictional costume character is referred to as “The Waitress”. I didn’t have to do very much to get this costume together, everything I had was right in my house because I dabble in dressup and costumes all the time, from making my own blood to finding the right kind of shoes to wear. The … Read more 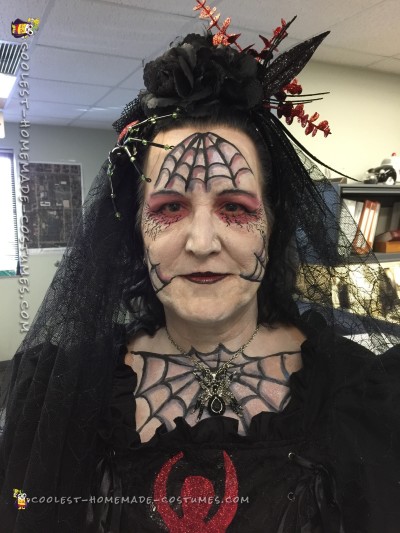 I came up with the spider bride Ideas for this years costume. After searching high and low it was hard to find the costume I had  envisioned for this idea. So I took a little from this costume and a little from another costume and put it all together. My biggest problem was I blended … Read more 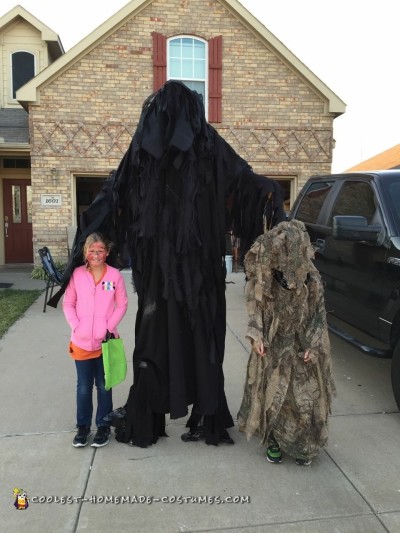 Our neighborhood is great on Halloween. Every year even the parents dress up. So I decided to make my costume this year. I went to the store and bought black material and black Burlap and borrowed a sewing machine. I decided I was going to be death! Not just any old Death, no. I went … Read more 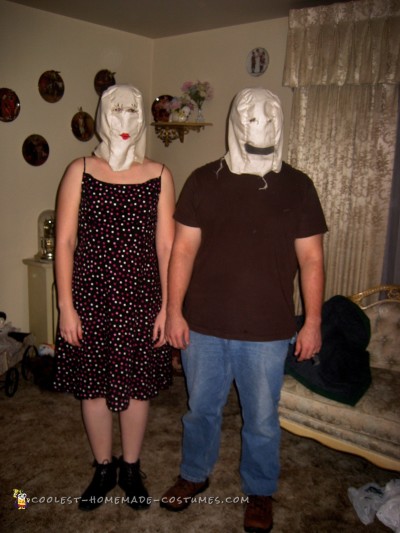 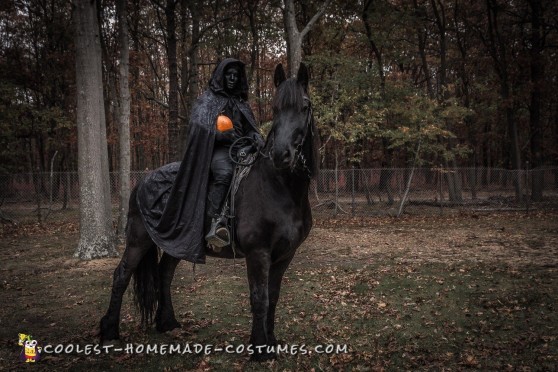 I had a really hard time coming up with a costume idea this year, which, I’m sure is common for most. But this year, I really wanted to go above and beyond the average norm. I wanted to scare people out of their shoes, I wanted to make this year a memira le one for … Read more 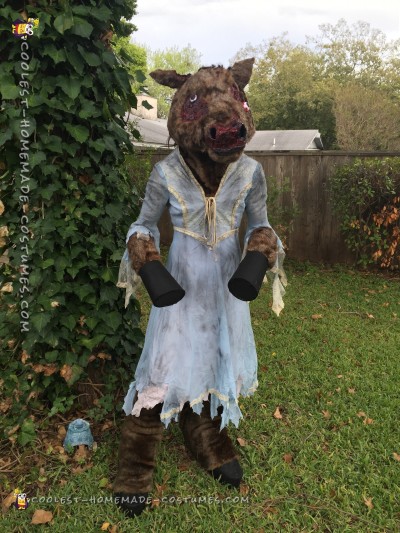 This is my son, Jake. We live in San Antonio and everyone who lives here knows of the local Urban Legand, The Donkey Lady who lives under a bridge and terrorizes anyone who comes near the bridge. The story days that she was burned and resembles a creature that is half human, half donkey. We … Read more 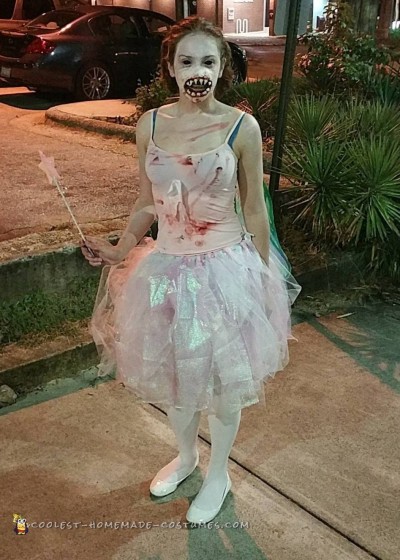 I decided I wanted to be something creative this year, as well as scary, and the first thing that came to mind was the scary tooth fairy! I made my wings with poster board, cellophane, and glue. First I drew the veins of the wings on poster board (6 sets in total), then I cut … Read more 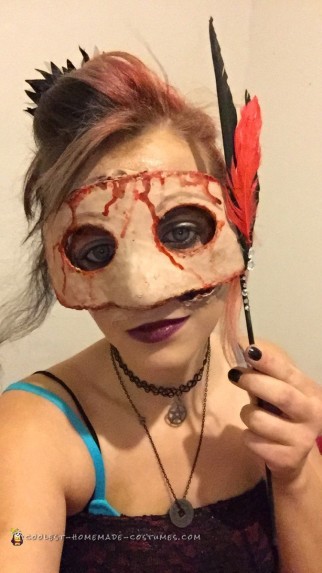 I sway into the Mascaraed ball in my red and black gown feeling beautiful. I feel graceful in my three inch heels as I glide on the dance floor; My mask firmly in my hand. Everyone cheers me and my date as we end our dance. I’ve waited for this moment my whole life; and … Read more 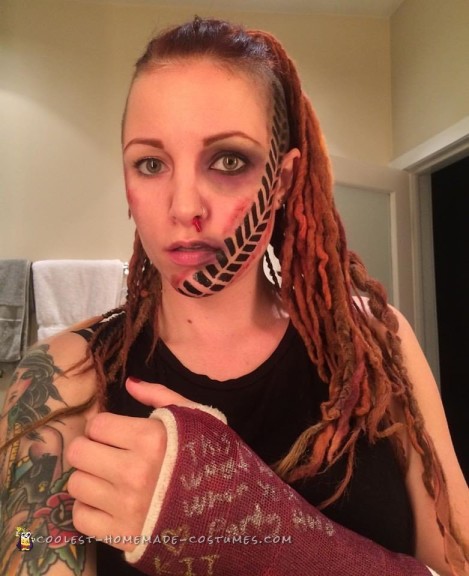 I recently broke my arm by falling off my bike. I was working on halloween, so I wanted to be comfortable. I painted my face to look like I was in a bicycle accident. I used purple, green, red, and black eyeshadow to make my eye and lip look bruised. I made a stencil for … Read more 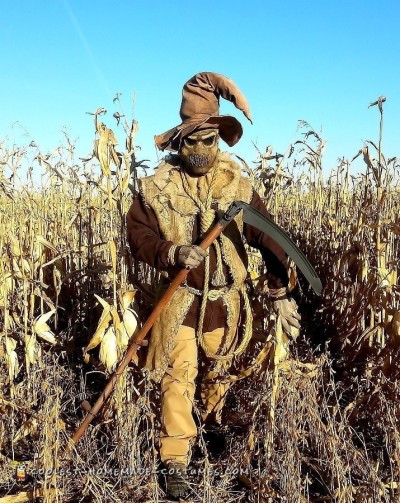 Before I start on the “How To” of this scarecrow costume let me tell you that burlap makes the hugest mess ever. I have never worked with the stuff before so I had no clue that by the end of it all I would be picking it out of my eyelashes… not to mention the … Read more 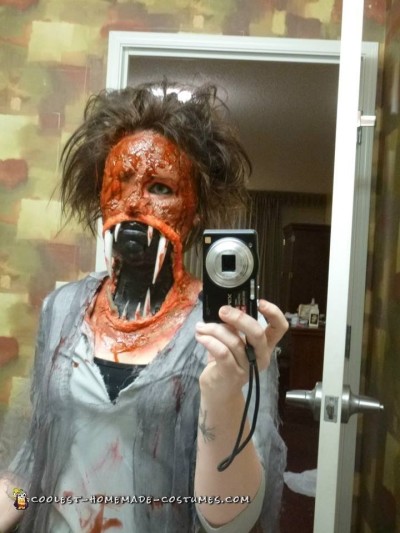 This scary costume idea took me hours to make and take off. But winning two contests made it well worth it! First I made my eye patch which I couldn’t see through. I’m sure there are other ways to make it so it is transparent. I grabbed a cotton make up pad; one of the circle ones … Read more 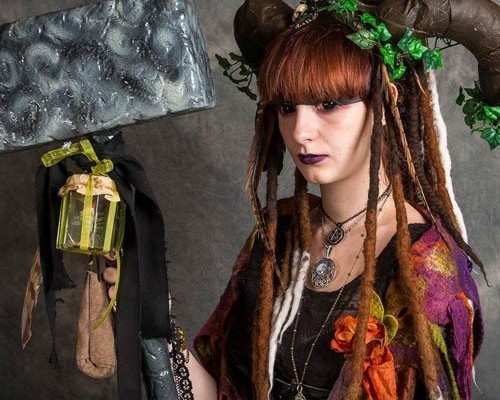 This artistic and demonic fairy eater costume was made for Halloween Ball, and it was the funniest costume I ever wore. Well, not funny at all because it was very uncomfortable, but I felt very scary and poetic, and that was awesome. I wanted to create a demoniac creature who lives in forests and eats fairies. … Read more 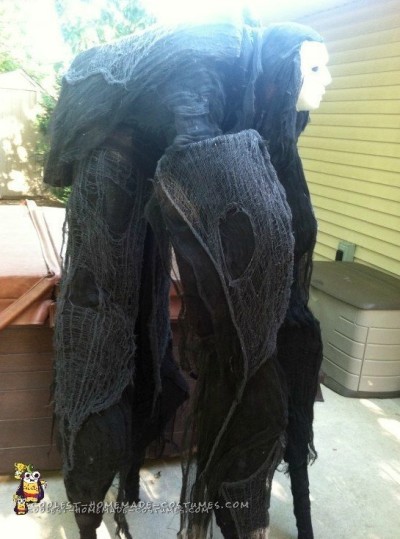 My Shadow Strider costume was quite the challenge. I found the idea in a Youtube video (though in the video they call it a stilt spirit… I thought it needed a better name). Shadow Strider Costume Directions Starting in May, my step-dad and I built circus peg stilts, which I sewed foam around. I then covered the … Read more 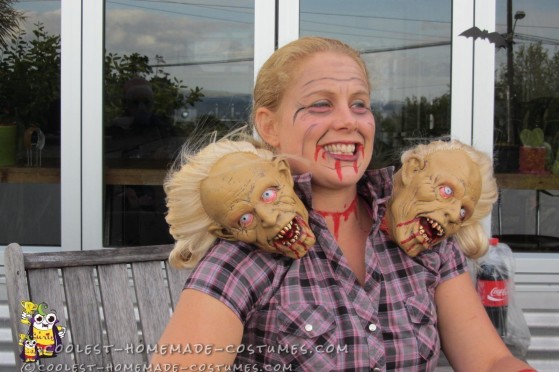 In the build up to Halloween my local haberdashery shop (in Browns Bay, Auckland, New Zealand) becomes my second home; where I buy decorations and look for a costume. But last year I found  something completely different. As I was browsing the aisles I saw these two freaky faces peering up from an assortment box … Read more 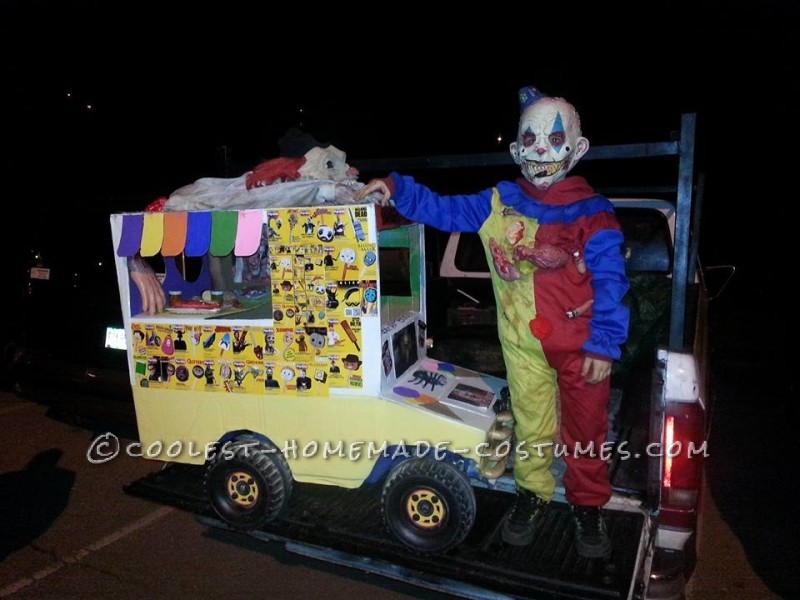 This is our seven year old son’s homemade ‘I-Scream Truck’ we made him this year. The way we built it, was just to cut out some cardboard boxes. We used four boxes to be exact, and we taped them together to build the truck body. The frame of the truck was a power wheels 6-volt … Read more 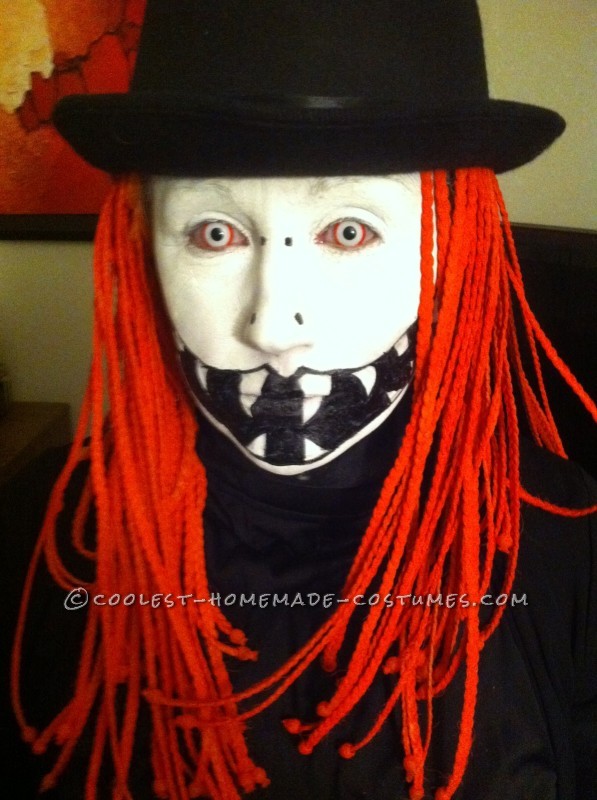 I decided to look through pictures for make up ideas this year. White make up has always been a challenge for me. I found a similar picture and went with it. This is How the Creepy DIY Costume with Orange Hair and Wicked Face was built: I purchased contacts, a hat, gloves, and a lot … Read more 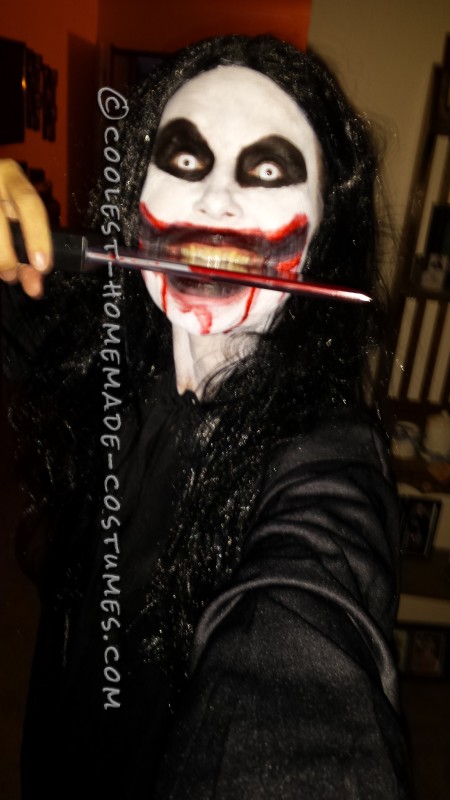 Halloween is my favorite time of the year.  I try to stay in the theme of Halloween and tend to go towards scary.  This is year I came across Jeff The Killer.  He’s a Internet urban story.  You will come across different stories of how Jeff The Killer came into his own.  I searched through … Read more 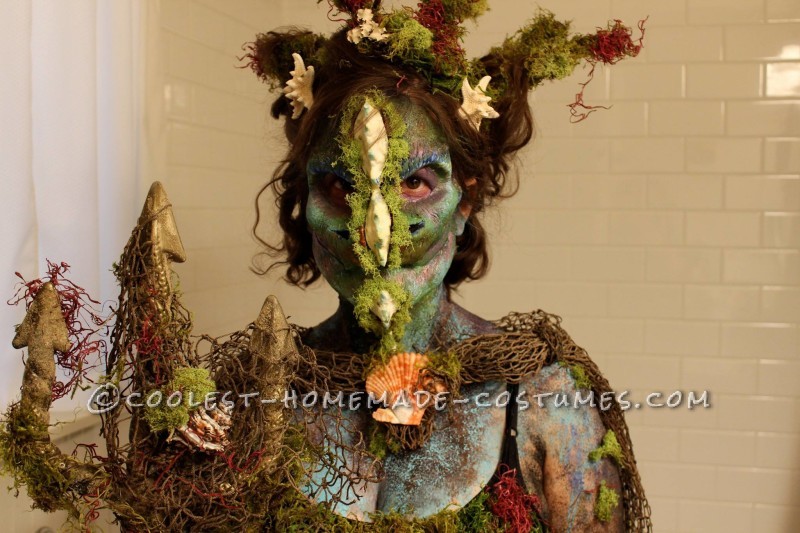 I’ve wanted to be a scary mermaid for years and finally made it happen. I made the scales out of many different shimmery fabrics hot glued to a long body-con skirt I gathered and sewed at the knees to give it the right shape, and the fin out of tulle and seaweed. I hot glued … Read more 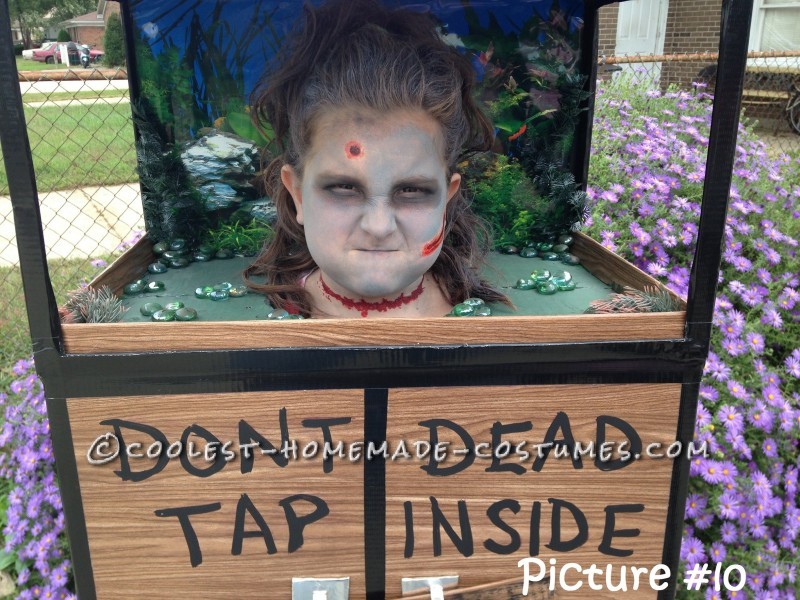 So this costume started off with my seven year old really wanting to be Anna or Elsa from Frozen. I told her that there would be a million and one of them and she needed to be something more original and maybe something scary. So I went looking around on this site and found a … Read more 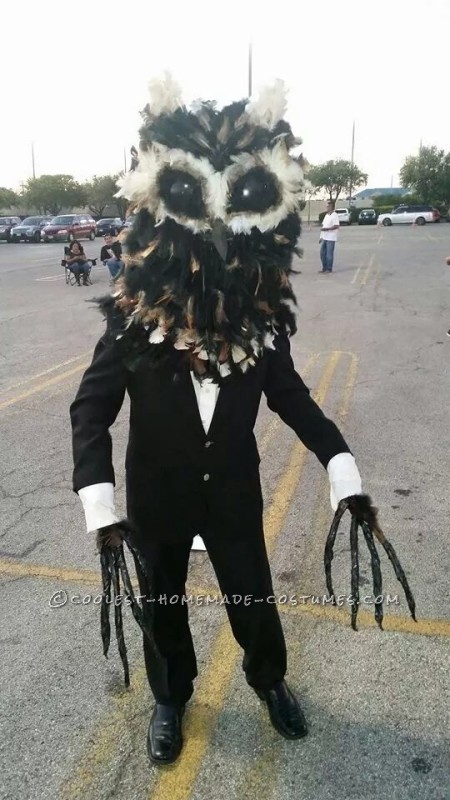 My 15 year old son saw a YouTube video about an urban legend, the Owl Man, and immediately decided that he wanted to create his own version of this for his Halloween costume. He and my husband began by taking chicken wire and  bent it and shaped it into a shape that resembled an owl’s … Read more