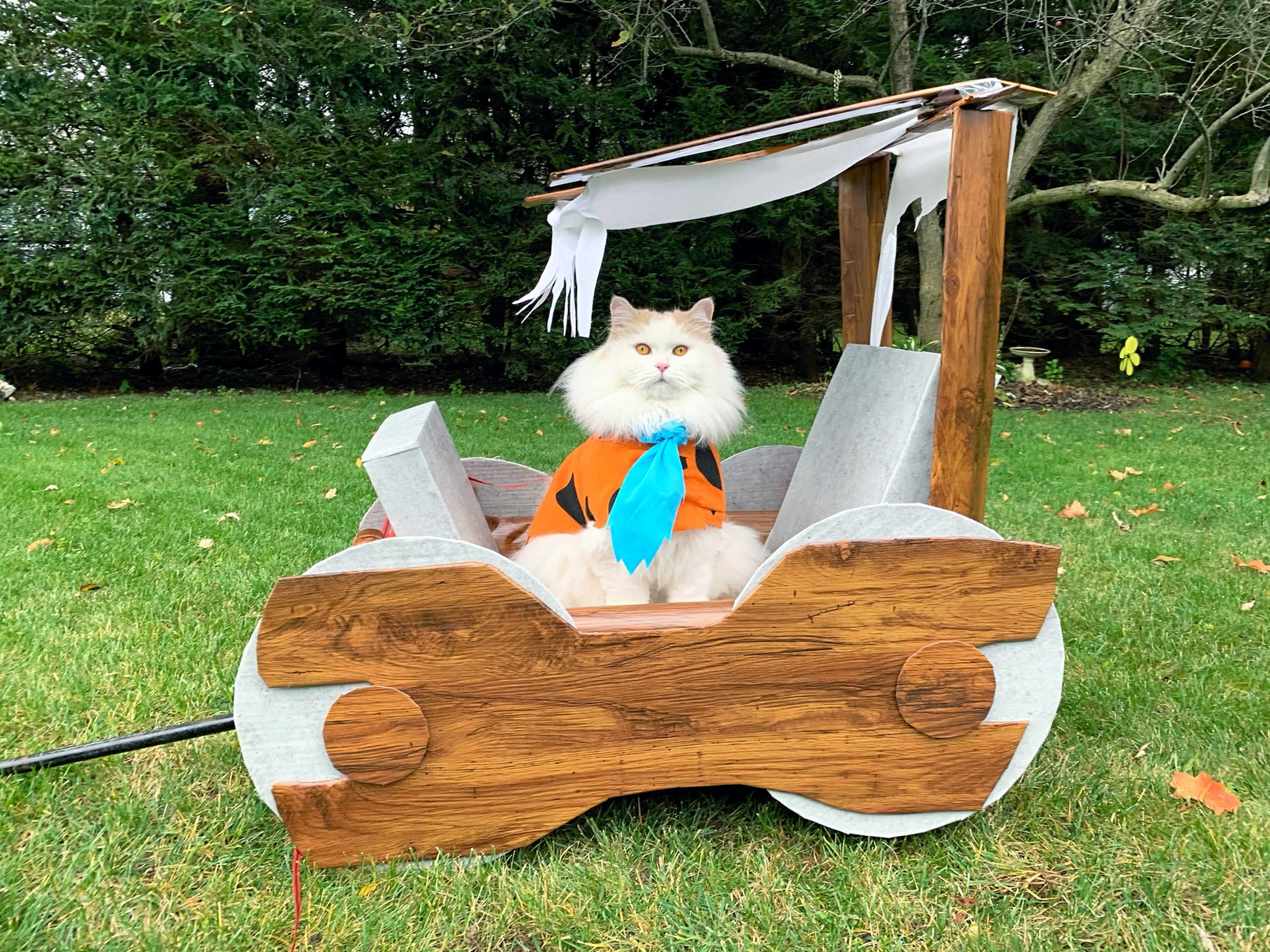 Here’s the coolest every cat costume featuring Louie, my 5 year old rescue cat. Louie loves to go outside on his leash and go on adventures with me. He also loves to be pulled around the yard in his wagon while he looks around at all the birds. He doesn’t like things on his head so when thinking of what his Halloween cat costume would be I wanted to come up with something he wasn’t unhappy wearing. So I knew it had to fit like his harness for going outside since he doesn’t mind wearing that.

I took an adult Fred Flintstone costume and cut it up and sewed it to fit him, like his harness does. That way it was no big deal to him and he was already used to it. Then I decided to turn his wagon that he already loved riding in into the Flintstones car.

I cut up a giant tv box to create the frame since that is really heavy duty cardboard. I cut out the pieces for the frame and covered them in wood grained contact paper, then used packing tape to secure it up right and to the wagon. I cut out the wheels from extra boxes I had and made the pattern from a huge serving platter I had, then covered them in concrete contact paper.

Then I freehanded the shape of the log that holds the wheels and covered that in wood grain contact paper. I hot glued the wheels to the log shape and used command strips to attach it to the wagon. I cut up an old sheet and used garden wire to hold it into place along the cardboard frame and down the back.

The entire process of creating this cat costume was fun and Louie was a part of the entire thing. He is always right by my side so he was there for the whole thing. He laid on the cardboard as I first started and I worked around him during his nap. Then when I started putting it together he laid in the wagon while I worked around him. He even jumped in it on his own as I was pulling it out of the house.

The hardest part of the entire cat costume process was trying to film him and pull him at the same time holding a selfie stick. He just looked around and enjoyed the ride. Everyone who has seen him has laughed and couldn’t believe he just sat there looking around. It’s his usual ride just decked out so he was happy.

It was a lot of fun. Here’s a video of him outside riding in it you can see it here:

One of A Kind Biker Cat Costume