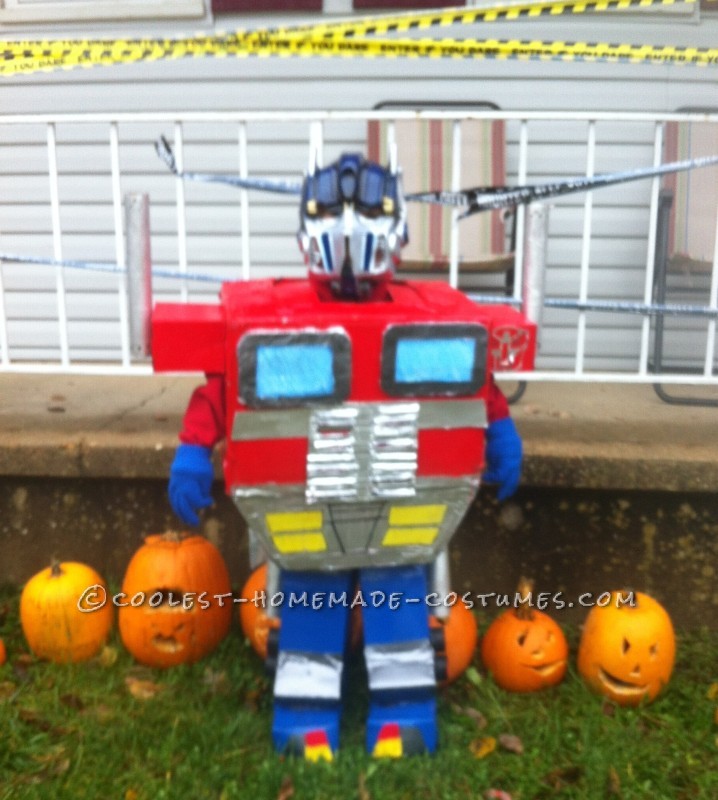 My son Danial loves transformers. I’m mean really loves transformers! Especially Optimus prime. So this year I decided to make his costume. I found a homemade Optimus Prime costume on Pinterest but it looked complicated. It took this guy 3 months to make. Don’t get me wrong, it looked amazing but just too complicated for me so I decided to do it my own way. First I gathered my supplies: medium cardboard box, two pop can boxes(12 pack),1 shoe small shoe box, three old paper towel rolls, red, blue, and silver spray paint, and red, yellow and silver craft paint. Then I got to work!

I started by taking my box and cutting holes for the head and arms. Then I cut bottom of the box to make more of a trapezoid shape. I then started tapeing the ends together. Next I got out my small shoe box and cut it in half.  I then glued those pieces to the arm holes I had made. Now the fun part! Spray paint. I spray painted the top half red and the bottom half silver. I did this a few times for a nice even coat. While I let that dry I started on the boots. I took two old pop boxes that are meant to be put in the fridge and cut the bottom of them. I then cut the pre opening of the box and cut that piece off all the way around. I took that piece and hot glued it to the front of the box to make it look like a boot. i spray painted those blue. Then I took the cardboard tubes and painted those silver( the third one I cut in half for the boots). Then I took some extra cardboard peices made windows and the grill. Painted those and after everything was dry I put all the pieces together until it looked like Optimus prime.

For the mask I found it cheap at a thrift store. Then it was time to put it on my son. We started with the boots. We got an old pair of shoes and hot glued them to the boots. They went on him a lot easier than I thought. Next the body. It went on with ease and it looked so cool on him. At the end was the mask. Easy peasy! My biggest fear fear was to see how he walked in it which ended up awesome. Because he walked a little slower than wanted but he looked like a robot. Now it was finally Halloween and it was time to show it off! Everybody loved it! But the most important part was that my son loved it and that made a great Halloween!