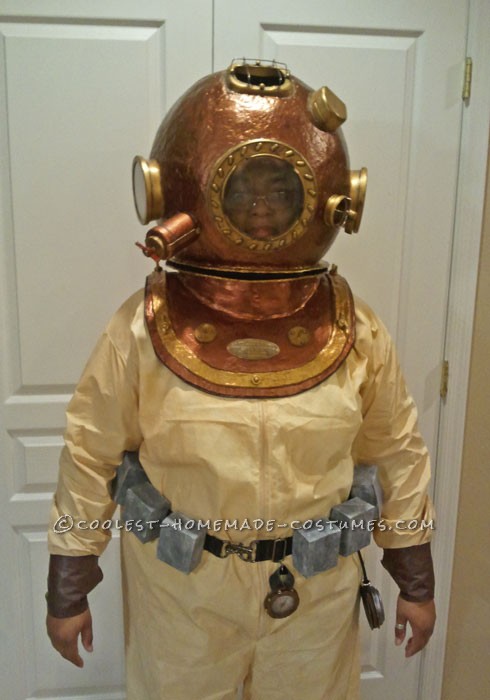 After looking for days online for the costume I wanted to make I decided on a diving costume. I also wanted it to look more aged instead of the newer shiny looking ones I always saw. It took me almost two months to make this antique Deep Sea Diver Halloween costume and I had a bit of a love hate relationship with this costume. Not that I loved to hate it, but sometimes I loved making it and sometimes I really hated it. Overall I had fun with it and look forward to topping my efforts next year.

I had a lot of trial and error making this costume. I looked to many online tutorials and eventually decided to do something a little different from fiberglass and bondo and with less chemical smells. This costume was made with mostly found around the house items and was about $60.00 out of pocket to make. I’m not a professional and this was my first attempt at making a costume that I didn’t sew.

I started with a punch balloon I blew up, laid saran wrap over it, mod podge newspaper strips and then laid plaster strips over that. I brought plaster of Paris which, didn’t work out so well because it started cracking and chipping off when I tried to sand it. I had to gently chip that off and go over it with instant paper mache, kind of like paper pulp you wet and mold it to how you want it and it drys and stays. Eventually I was able to put the primer on and paint it. The Breastplate was made much the same way, the base was cardboard and the gold straps under the wingnuts were also paper mache pulp. Parts attached were added later. I actually ended up liking the paper pulp because it made it have a more hammered effect to it.

For the helmet: The regulating escape was a candy sprinkles container, a screw attached to the knob which I made out of cardboard and painted red. The front port window was a plastic candy container lid from the dollar store. Side port windows were sour cream containers and their lids with plastic cut from CD lids inside them. The transceiver recess on top was a lunchable container, the spit dock was the top of the candy sprinkles container with some wire glued on and a knob also made from cardboard, sitting on the wire it gave the illusion it was there but still open allowing air to go in. The pipes on the back were made from cardboard and I used a soda screw top and a juice screw top, painted inside allowed the color to show through outside.

The suit was a white painters suit, that was painted tan. I made covers for my shoes with fabric and held on with gold thumb tacks, the “metal” weights on my shoes were cardboard painted silver and aged. The weights on my waist were old Jiffy cornmeal boxes cut in half, with cardboard to fit inside and close the side holes, sanded and painted and attached to a luggage strap with Velcro. The compass and air gauge were also made from items laying around like the bottom of a soda can, the plastic from one of my empty wire spools, and printed pictures.

I had sooooo many people complimenting me on my costume and asking how I made it and saying I was going to win (this was for a costume contest at a casino here). I didn’t win anything but seeing everyone impressed and taking pictures made it a blast for me. 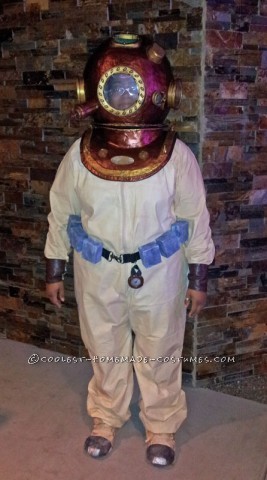 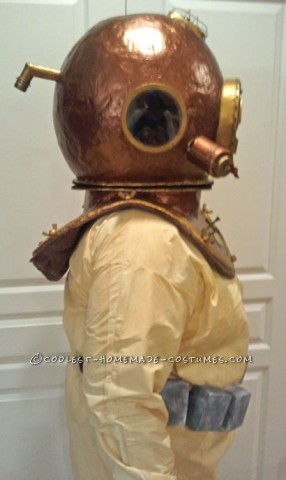 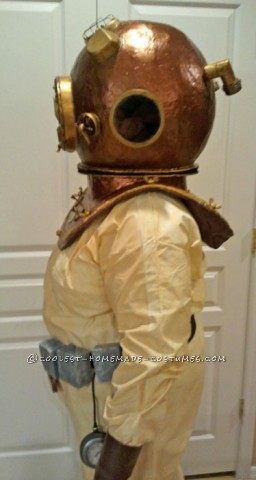 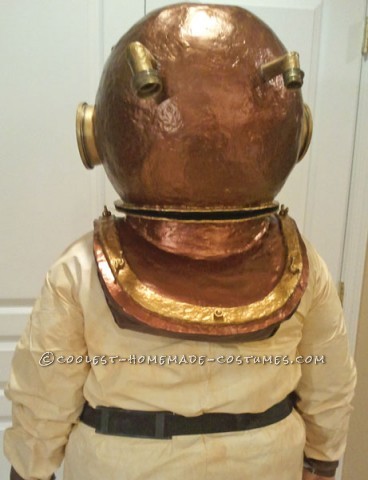