Alice in Wonderland costume by Emily B., Sacramento, CA 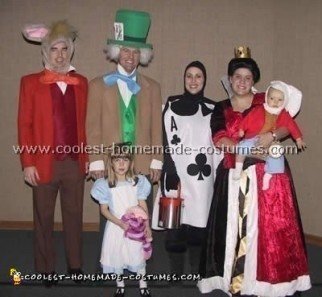 Every year my sister and I come up with a theme for Halloween costumes. This year we thought of Alice in Wonderland. I am the Queen of Hearts, my husband is the March Hare, my son the white rabbit, my sister the Card, her husband the Mad Hatter and her daughter Alice.

I love to sew and I made up the pattern for the Queen of Hearts outfit. I took about three patterns and put them together to make one. The wig was an Asian wig and the crown was a foam little bear crown that I spray painted gold. I also made the rabbit head for the March Hare by just a basic rabbit pattern but I had sewn in some wig hair for the center. The vest and bowtie I made of felt but rest of the outfit I found at a thrift store.

For the white rabbit I made the rabbit head also out of a typical rabbit pattern. The outfit I too had to make up a pattern because there are never any patterns for a suit coat and vest for a nine month old. I got a wooden circle, painted it white, stuck number stickers and wood strips for the “hands” and attached a gold chain from the hardware store.

For Alice my sister just followed the Alice in Wonderland pattern. The card she made out of felt. For Mad Hatter she found a green hat on the internet and we made the white press tag from my embroidery machine. The vest and bowtie was also made of felt and the jacket and pants from a thrift store.