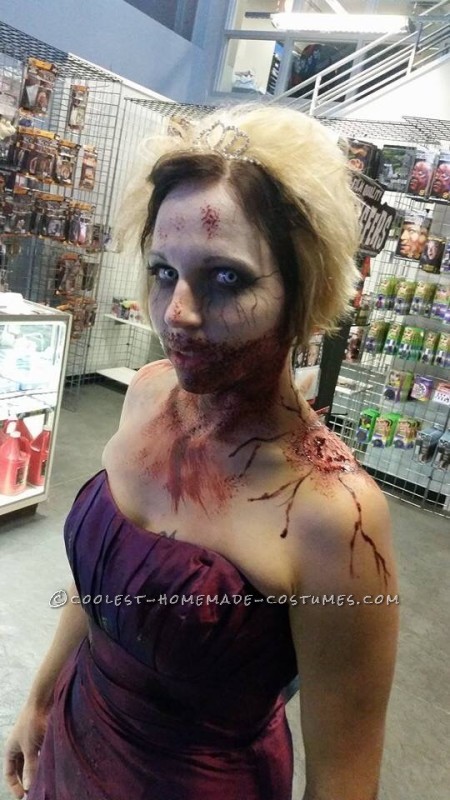 Why be cute when you can be undead! I knew I wanted to be a zombie so I googled some images and found one that I knew I wanted to do. I went to goodwill to find a prom dress to destroy. I friend on quite a few but none really fit so I bought the first one that fit out of three stores. Luckily it was also the cheapest at $8.99. I then used a steak knife to make cuts, slits, and other various wreckages.

Now it was time to get it dirty and bloody. I tried regular potting soil at first because I didn’t want to smell like outside dirt, but the dry dirt just seemed to roll off due to the material type of the dress. So I grabbed a bowl from the kitchen, added water, and proceeded to make mud from the potting soil and water.

I then spread the mud all over the dress, front and back. I only had one small packet of fake blood, but I used it anyway. I opened the packet and spread the blood in various places as well. I then hung the dress to dry.

Because of the material type, the blood and dirt is harder to see, but it still was good enough that it doesn’t look brand new, so that’s good. I back combed my hair and hair sprayed it to death with a tiara.

I put in white zombie contacts and added fake eyelashes. I used white costume makeup all over the top half of my face, even my eyelids as a foundation. I used green and purple eye shadow on my eyelids.

I used black costume make up for under my eyes and patted it in to blend better. A little touch of mascara and eyes are good to go. Used black eyeliner to draw in some vines from my eyes. Pated in blood all over the place and call it good!