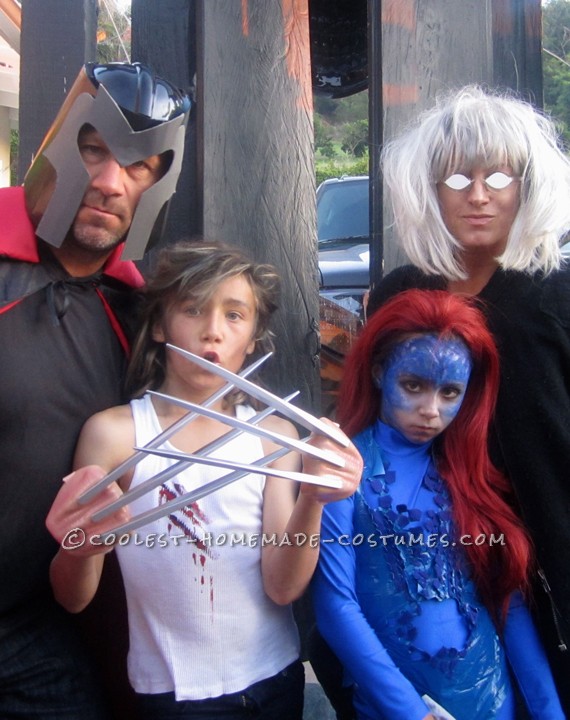 My family and I had just finished the X Men series and were OBSESSED with it to say the least!  It was a given what we were going to be for Halloween!

For Magnito, I recycled my husband’s Darth Vader helmet from the year before (you can also use an old skateboard or biking helmet spray painted black).  I found a DIY version of the Magnito Helmet on line. The templates are provided which you can print out and uses to cut cut out the pieces from a poster board.  After cutting them out, I attached them to the Darth Vader helmet with black duck tape and a glue gun.  Then I painted  the back and silver portions of the mask accordingly.  I had him dress in all black and used a recycled black vampire cape from years before.

For Storm, the white eyes were a challenge to figure off how to pull off.  I found a pair of clear lense/frameless front glasses (a bit of a Benjamin Franklin style) which I glued eye shaped cut outs from white poster board.  I wore a white wig that I backcombed and sprayed to give a wind swept look.  I also dressed in all black with black combat boots.

For Wolverine, I bought Wolverine claws for $20 from the Halloween store.  For the rest a white tank top which I drew three diagonal black streaks with a sharpie and dripped Halloween store blood from the slashes.  He wore jeans and a brown fake leather jacket I found at a thrift shop. For his hair,  I backcombed, hairprayed, spray dyed brown his hair into a Woverine coif.  I added dark eye brows and side burns with a brown makeup eye pencil.

Definitely the biggest challenge was reinterpreting Mystique, a naked blue woman, into an age appropriate version to suit my 8 year old daughter.  First I purchased a blue full body leotard on line (about $25 which she has used again for various dance/play costumes).  My daughter was having a duck tape wallet making moment, which inspired me to construct an overlayer of matching blue ducktape (with self duck tape backing) into a one piece type body suit to place over it.  Definetly not easy but I had fun doing it…at the end, I cut small scale like pieces out with an exacto blade to imitate the scaley skin look of her character.  We covered a pair of old shoes with the same blue duck tape.  For her make up, I first applied flesh colored scar paint to create the 3D scale ridges and painted over them with blue face paint.  I only painted the top portion of her face as the face makeup seemed to bother her and I wanted her to be comfortable.  We had an old red wig from a mermaid costume which we slicked back and sprayed to top off the look!

It was by far our favorite family costume (so far) – definitely a hit that night! 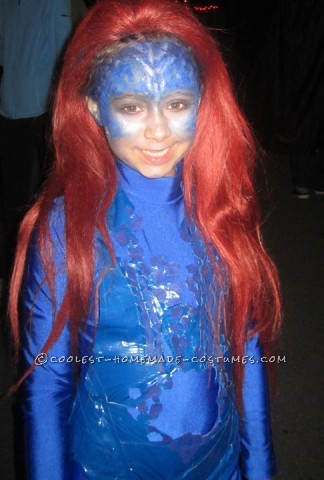 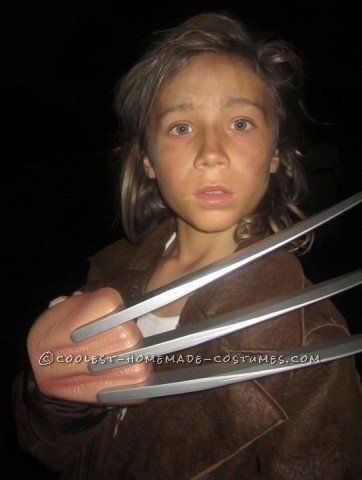