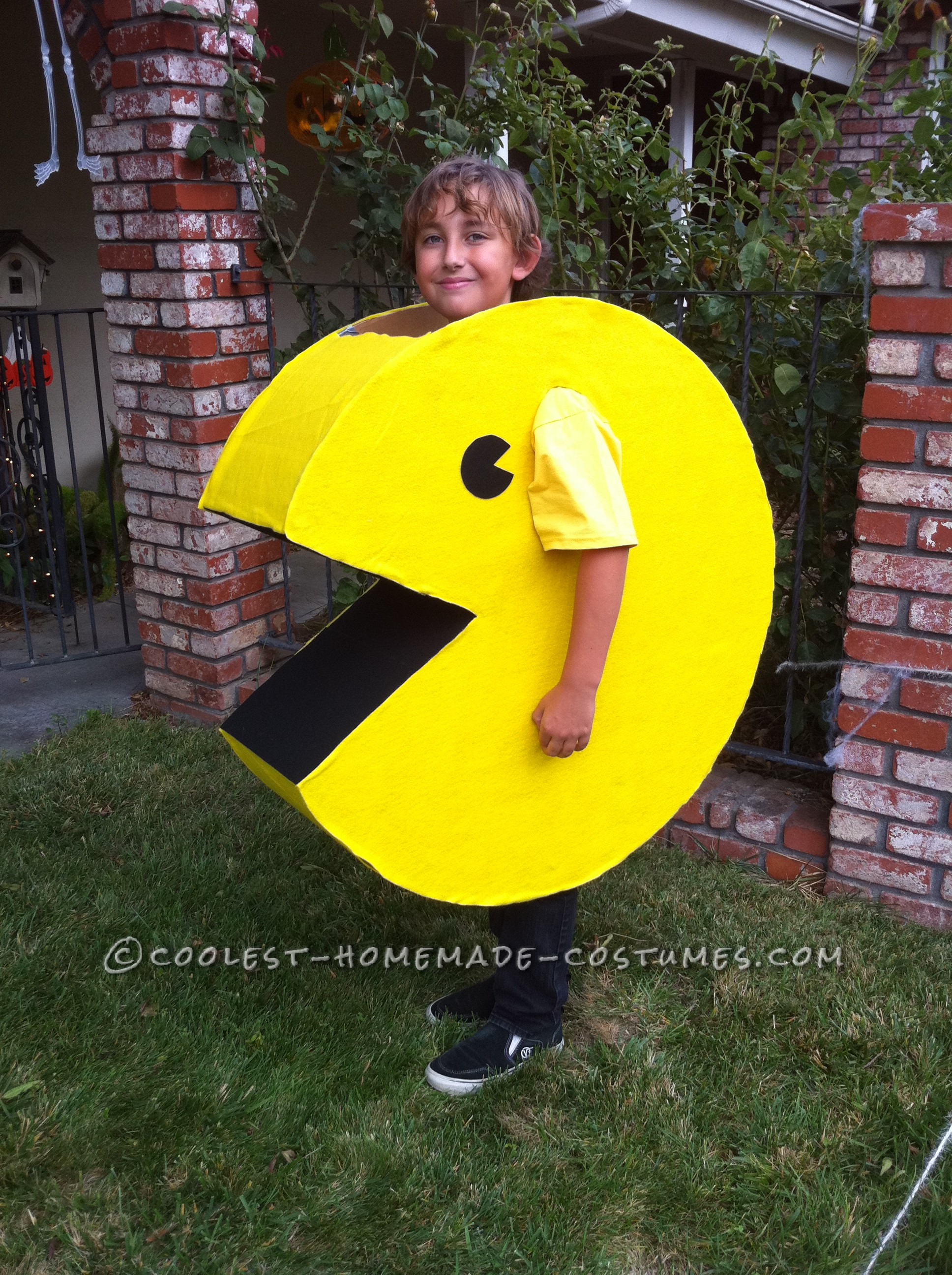 This costume was fairly easy to make, and didn’t take a lot of time or money. The response to this costume was fantastic! Both young kids and parents recognized the character, and were happy to shout “PacMan!” even from across the street when we went trick-or-treating on Halloween. At school, one girl in his class said he was a wheel of cheese, but then all the other kids knew he was PacMan and her teasing stopped before it started. After school several kids even asked to wear the costume and “be PacMan”, of course while making the ‘wacka-wacka’ sound from the video game. Materials we used were a large cardboard box, a box cutter, yellow and black felt, lots of duct tape, and fabric glue.

I made PacMan’s body by drawing a circle (used a string and two pencils like a compass) on the flattened cardboard box, on the non-printed side. I made the circle’s diameter the length of my son’s body from about his chin to his knees. I cut a second circle using the first as a template. We estimated where the shoulders would be and cut oval holes for the arms. I cut the pie-shaped wedges for where the mouth would be. We made the costume about as wide as his body, so his arms would be able to hang freely at his sides. I cut strips of cardboard the width of his body (I think it was 11”) to attach to the front and the back, leaving the top and bottom open for his head and legs. I cut the strips perpendicular to the tubes inside the cardboard (across the grain?), so I could bend them easily around the circle. I used some cheap duct tape we had at home to attach the strips of cardboard to the round body forms on the inside of the costume, but by the next day it had already started to pull away from the cardboard, so we went to the local hardware store to buy the extra-strength industrial duct tape, which worked great. I was concerned about the fabric glue not sticking well to the duct tape, so I taped it only on the inside.

I used yellow felt to cover the cardboard body. I applied fabric glue on the cardboard surface then laid the fabric over it, and trimmed it (and cut out the arm holes) after it had dried. I did the same thing to glue fabric strips to the front and back. I used black felt to cover the mouth and make the eyes. My son wore a yellow t-shirt and black jeans under the costume. On Halloween, the costume got a little heavy, so we had to put some padding on his shoulders, under the shirt.

2 thoughts on “Want a Fun and Easy Homemade Costume? Be Pac-Man!”