My two boys (four and two year olds) love the UPS and FedEx trucks! It’s a game for them to see who spots one first when riding in the car. And of course they’re always excited when we get packages delivered to our home (which is all the time!)

At first I did a quick search to see if any UPS or FedEx costumes existed to buy and quickly found the UPS toddler costume. I bought it and thought, that was easy. “Now we just have to piece together a FedEx costume for the 2 year old. Sounds like a walk in the park”. Could we stop there though? No! My husband and I are obsessed with Halloween and since our oldest was born, we decided to have a costume theme each year for the entire family.

It’s been fun but we kinda figured this would be our very last year before our soon-to-be four year old would only want to be some muscular superhero like the rest of his friends. So, we decided we had to go all out this year. We built the UPS and FedEx trucks around the boys and decided to dress up as United States Postal Service carriers.

I bought the outfit off of Craigslist for $8 (Score!)

For the truck, I used two small moving boxes, one for the main body and one for the front (hood, windshield and front sides). I taped everything together using regular moving tape. I cut out a rectangular hole on the top just large enough for my four year old to fit into and cut out the bottom of the box entirely for his feet. I had to make sure my son could fit into the hole and while testing that, realized the box wasn’t strong enough. I had to seriously reinforce the box by adding more cardboard pieces on the inside of the truck to prevent the top from being torn or smashed by his little hands.

Once the truck was sturdy enough, I used regular spray paint to paint the outside. It took about four coats before all the words on the original moving boxes were covered. Believe it or not, spray painting was the toughest part. It was my first time. I was wearing a mask and spraying outdoors, but the fumes were just too strong and nasty. Also, pushing on that little spray knob for 30 min gave ma a finger cramp that lasted for three days and made my arm shake for a full 12 hours! Was it worth it? Of course it was!

I had to let the paint dry for a few hours and then the decorating began. This part was really fun. I picked up a few UPS envelopes from the local UPS store and cut out the logos. For some reason, the logos were white and brown so I got a yellow sharpie to color in the the white areas to make the logo look more recognizable and match the hat (sorry UPS brand marketing team!) I taped the UPS logos to the sides of the truck and used a gold sharpie to write in the words. I didn’t have any other logos and thought the back of the truck needed something so I found a UPS envelope I had at home and cut out the UPS We Love Logistics to paste to the back.

For the straps, I used some white ribbon, used an exacto knife to cut four slits, strung the ribbon through and tied four knots to prevent the ribbon from going through the slits. After that, it was just the lights, wheels, windows and front grill. I used construction paper and double sided tape for everything. The wheels were made from leftover cardboard so they were a bit heavier; hence, I used tape, glue and did a little sewing action to make sure the wheels didn’t come off completely (alas the wheels did come off completely!)

I searched and couldn’t find a FedEx costume to buy so I found a navy blue shirt, pants and a hat from my two year old’s closet, used purple duct tape to give it the FedEx color and taped the FedEx logos onto his hat and shirt.

For the truck, I made a replica of the UPS truck, just smaller to fit my two year old. The decorations were easy to do and much quicker since it was the second time around. I picked up some FedEx packaging from the local FedEx store and cut and taped the logos.

I bought the USPS logos online for about $2 each and ironed them on two of my husband’s old blue button down shirts. I didn’t want to ruin the sun hats we had so I sewed the logos onto our hats. We used black electrical tape we had at home to line the sides of our gray trousers. The pictures don’t show it but we also had canvas cross body letter carrier bags to finalize the look. Simple. Done!

I knew the costumes were cute but I could not believe how many ohs and ahs we got walking around in the neighborhood. When people opened their doors, almost every other home said the costumes were the best they’d ever seen! A few people actually suggested that we submit our costumes for a contest. I had no idea there were even online contests like this. Anyways, here I am.

My two year old couldn’t keep up with the four year old, so more often than not, people would see a cute UPS costume and be in complete awe. A few seconds later, my two year old would run up to the same house and the people would just die of amazement. People couldn’t believe how cute the costumes were together!

Then my husband and I would walk up in our USPS costumes. No one mentioned how cute we were (how could we compare to the little guys?) but everyone got that we were a creative family of delivery people.

The boys shockingly lasted 45 minutes carrying those cardboard trucks around, but along the way we lost a few wheels (yes, even with them being taped, glued and sewed!) and noticed the trucks needed a new paint job.

Of all the family costumes we’ve ever made, this one has been the most fun and creative to put together and showcase. Our little boys had a blast seeing the costumes come together, wearing them and running around “driving” their trucks. We’ve had a lot of oohs and ahhs in the past with other costume themes (Super Mario Bros, Jake and the Neverland Pirates, Angry Birds) but this is by far the one that everyone says was most unique, creative and cute.

Thanks for your time and hope you enjoyed this submission. 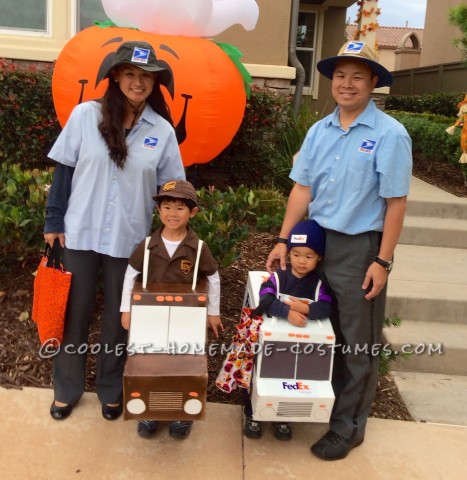 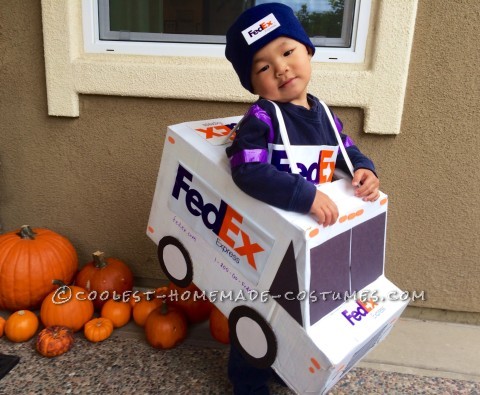 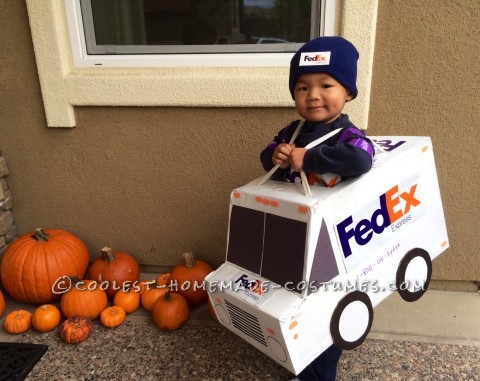 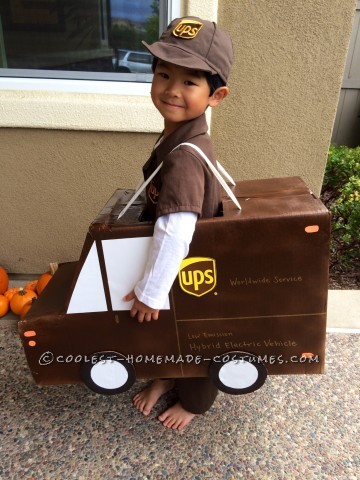 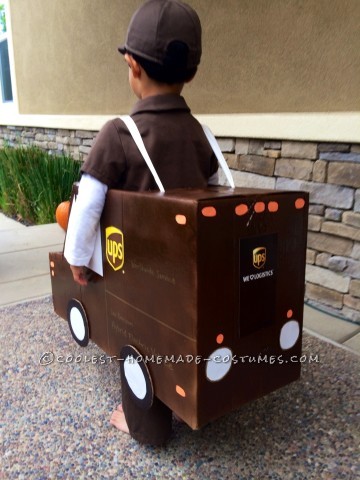 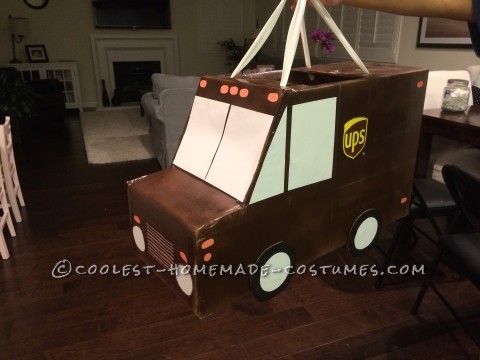 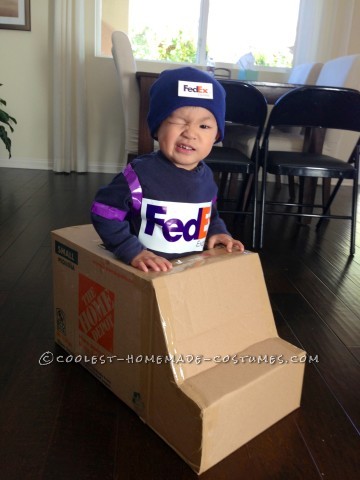 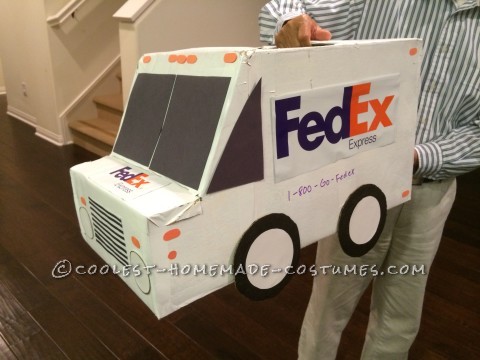 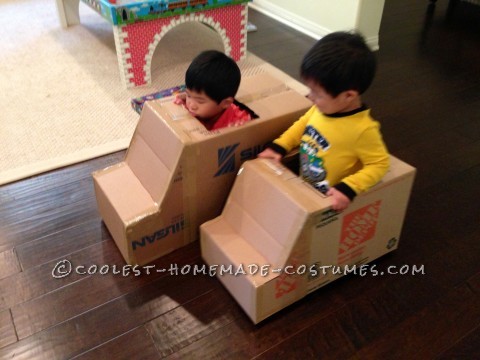 Simple and Creative Couples Costume: UPS Guy and His Package