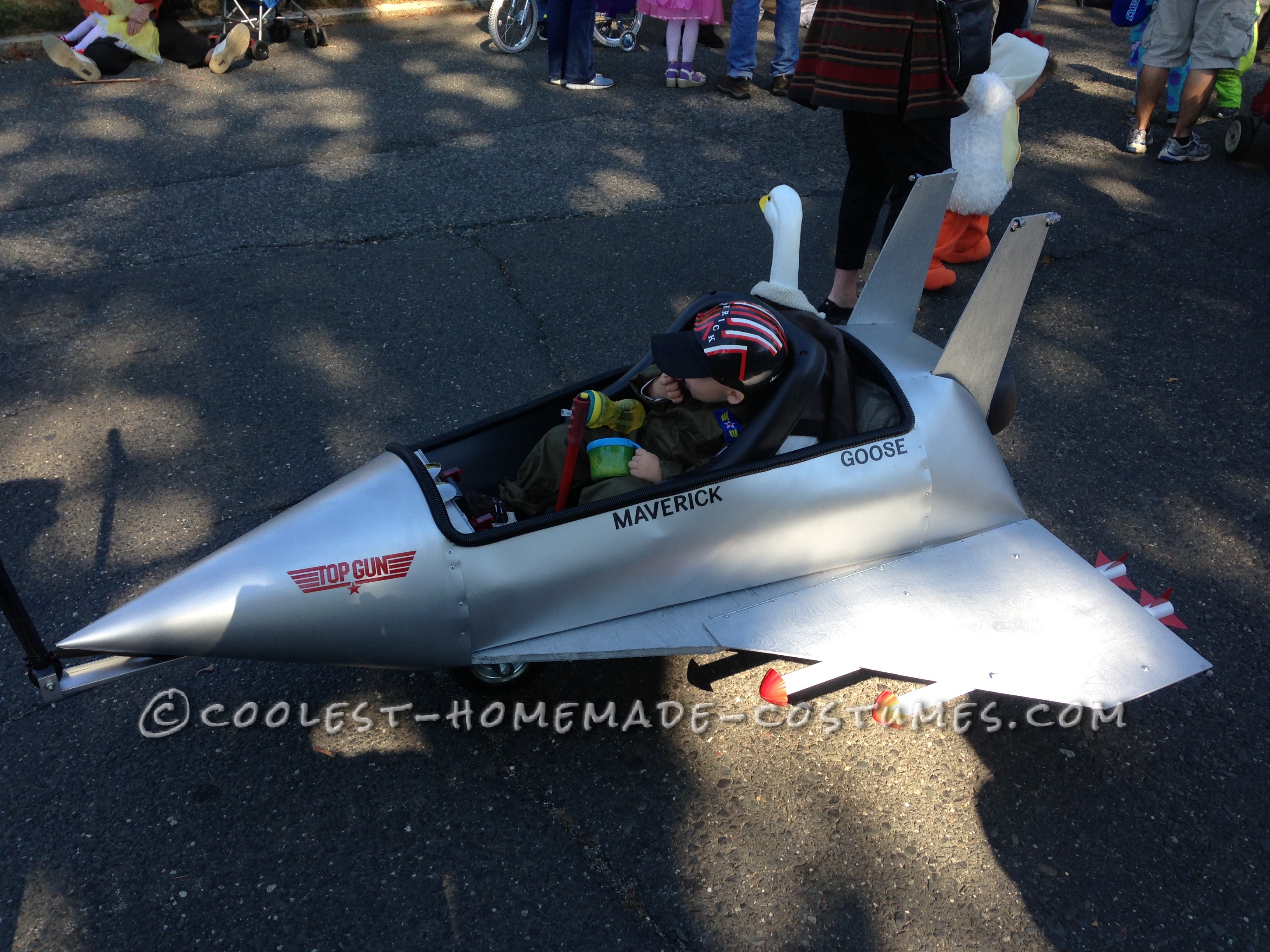 I thought I’d build my son an iconic 80’s movie wagon/small float, and since one of my favorite movies as a kid was Top Gun, I wanted to build him an F16 fighter jet so he could be ‘Maverick’. It started with a piece of plywood as the base, and I added an old wagon rear axle, and a $12 front swivel wheel from Harbor Freight. I used a piece of ‘C’ channel steel to bring out the handle from the plywood, then fabricated a mount for the wagon handle to attach from.

I like to keep things looking authentic, so I decided to make it all out of aluminum and pop rivet it together like a real jet is. I started with a few long strips of 1/8” thick flat aluminum and stared bending it to the shape of a jet fuselage. I made a few rounded pieces that went left to right, then added a full length along the body line from front to back. This became my ‘skeleton’ to build off, and from there I drilled a bunch of holes through the strips. My friend donated a big roll of aluminum roof flashing that was unusable from his roofing company, so I cut pieces of that and tried my best to shape it into the jet’s body while pop-riveting it to the skeleton. I curled a big sheet of the aluminum into a cone, and riveted that to the front as the nose.

I wanted to go ‘over the top’ and have some flames coming out the back, so I used a small bucket with the bottom cut off as the engine turbine, and grabbed a small car electric fan from my parts heap and mounted it up in the rear. A few long strips of orange material were attached to the fan’s cover, and when turned on, they flowed like flames shooting from the engine.
For the wings and tail sections, I used some thin sheathing from Home Depot and cut them to shape. I learned from experience, that getting through crowds was tough with bigger floats, so I engineered the wings to fold up on long piano hinges and hook closed so it was streamlined to get through crowds. An old tree swing seat was painted and bolted down, along with spray painting the whole jet silver. I was worried about my little pilot cutting cut on the sharp edges, so I got some plastic wire loom from the auto parts store and ran it around the edge of the cockpit. A joystick was made from a toilet plunger that I cut down to length and put a bicycle hand grip on it with a fake missile button (old trunk release button from a car).
To run the fan, I needed a car battery, so I mounted a small tractor battery behind his seat and wired it up. I even wired up some orange LED’s into the engine to provide more to the flame effect. I ran the wires up the handle to a switch I mounted on the pull handle that I could turn on/off while pulling him around.
For missiles, I needed something lightweight, so I used some plastic wire conduit cut to size, and used the end of some $1 store foam footballs for the tips. Some thin flat plastic from an antifreeze jug was trimmed for missile fins and painted, then inserted into grooves I cut in the conduit. The missiles were then mounted under the wings.
He needed a dash board, so I made that from sheathing as well, and mounted a few aircraft style switches, some old race car gauges, and a digital battery meter to monitor the battery life. I got some battery operated red and green lights and mounted them on the tips of each wing to add more ‘pop’ at night, and put some “top gun’ decals with ‘maverick’ and ‘goose’ on the jet too. My son would be Maverick, but who would be his co-pilot Goose? A plastic lawn goose was mounted behind him to get the comedy going, and most people got it, but the kids just asked why the ‘Aflec’ duck was in there.
The jet was a success, he won a couple trophies in it, but I had quite a bit of time in this one. Oh well, the little guy is worth it! 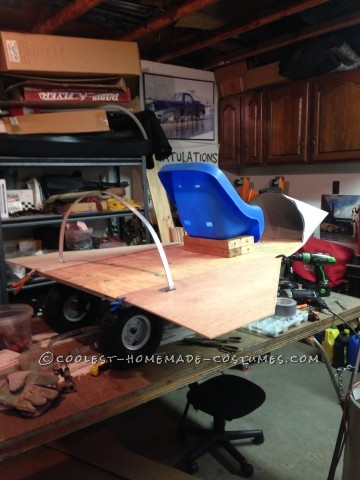 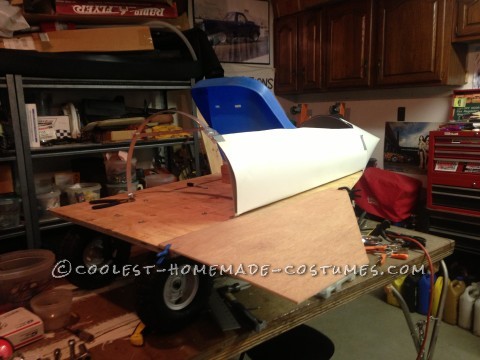 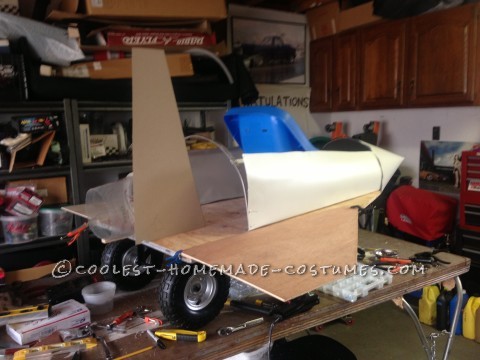 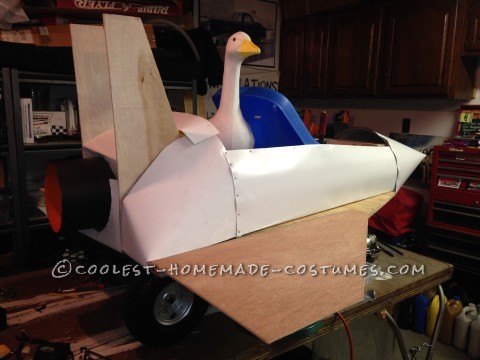 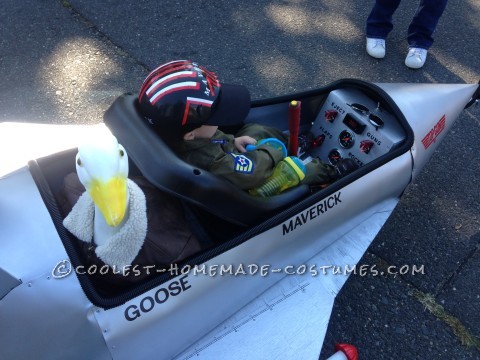 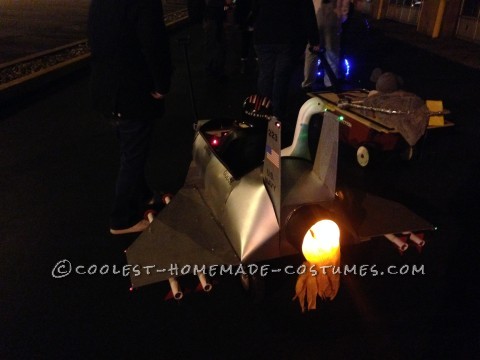 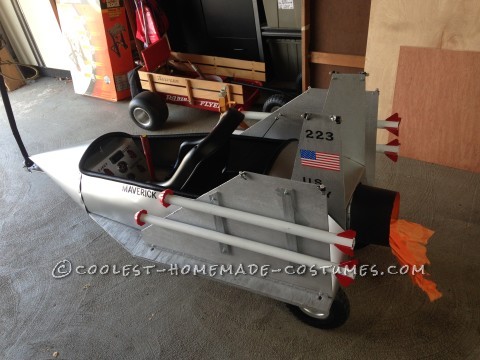