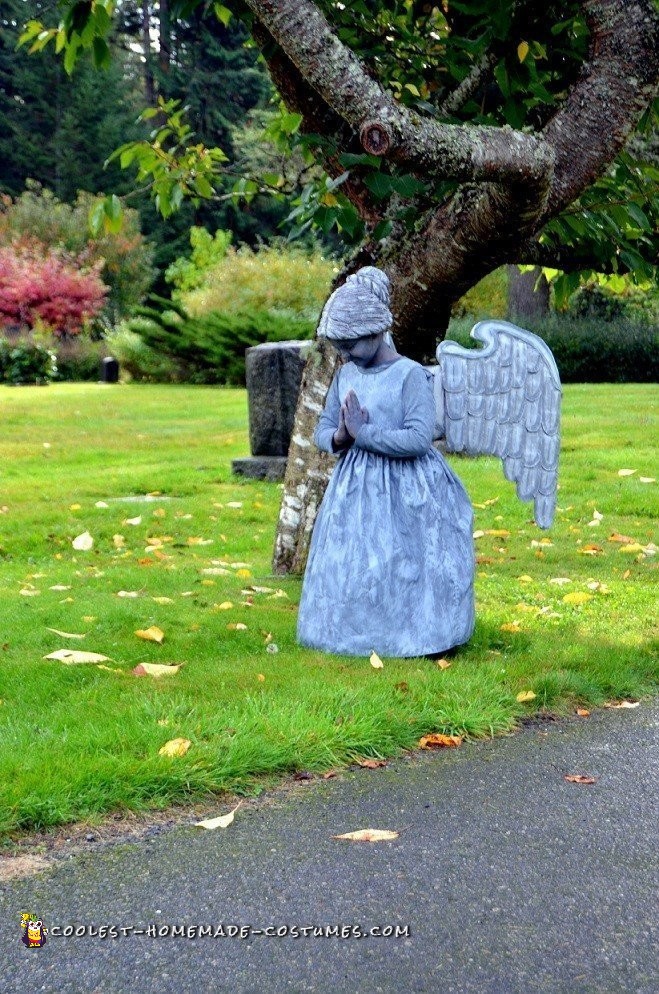 My 9 year old daughter wanted to be Medusa for Halloween, but after learning that Medusa turns people to stone she changed her mind to wanting to be a creepy statue. She has the personality that truly loves acting like a creepy character. She chose an angel after seeing them in cemeteries. The main part of the costume is the dress.  I bought a simple dress at Goodwill and painted it to look like stone using gray and white craft paint. I did the same for a long sleeved shirt so that I wouldn’t have to paint her arms every time too. The wings we made with foam presentation boards, wire, and foam sheets to make feathers. The wings are held onto the dress by hooks that are sewn into the dress. The hardest part of making this costume was by far the hair. To make the wig, I sewed and glued gray yarn onto a thin winter hat, which I then styled into a hairstyle fitting of an angel. Once the hair was glued and dry, I painted the yarn in more gray and white pain to match. By the end of the costume making process, my arms, face, and shirt were covered in paint. My daughter loves the costume, and loves that it was not simply a store bought costume. After the costume was done, I was so impressed with it that I wanted to take nice pictures of it in a cemetery. My own reaction to the costume really surprised me. She so closely resembled a statue that the final results were breathtaking. Those that have seen the costume in my pictures have been amazed at how much she looks like a statue.  A few people have actually been so sure that it was stone, and not a child, that they couldn’t believe it when I showed them a picture of her smiling in her costume. My daughter is so thrilled with how that costume came out that all of the time and hard work that went into was well worth it. 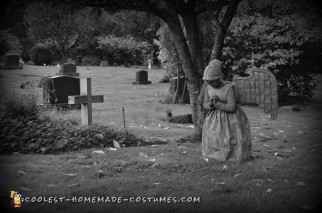 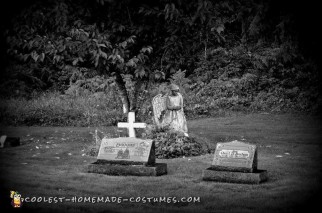