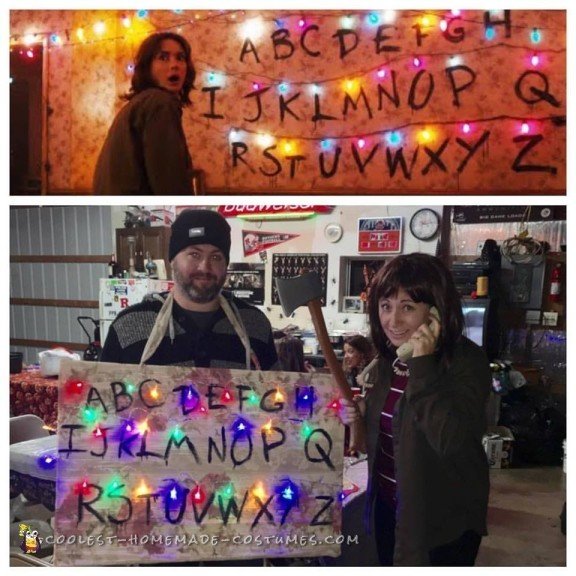 After we all became a bit obsessed with Netflix’s Stranger Things this summer, we knew we wanted to channel this 80’s styled hit and come up with something for Halloween. If we had more people that wanted to get in on the Stranger Things costumes, we could have had all of the kids from the show represented as well. But it looks like there were a lot of people dressed up as Eleven for Halloween this year anyways.

As for our choice of Stranger Things costumes…The wall in Joyce’s house is an obvious visual for anyone that’s seen the show. So, you don’t have to explain (to too many people) that you are not a Ouija board. Joyce paints the alphabet on her wall and strings up lights so her missing son can make contact with her. We saw a lot of people dressed up at ComicCons where they wore an ugly floral beige shirt, painted the alphabet on the shirt and attached lights. Since we didn’t want to repeat what others had done, we had to take it a step further in our own rendition.

Joyce, played by Winona Ryder, is a mother rattled by the disappearance of her son, to the edge of stability. She’s definitely not a fashionista, so her clothing (for the wall scene in particular) was very easy to find.

Maroon shirt with white stripes (from Forever 21) and an army green oversized button up (Old Navy). The phone receiver I borrowed from my office for the night. And the plastic axe is from one of the Halloween stores. Complete the look with a dark brown, messy wig- super cheap.

24 x 26 poster picture frame (Wal-Mart), sheer panel curtain wrapped around it. Then the alphabet was painted with fabric paint and battery operated lights safety-pinned to the fabric. Finally, I tied an extra piece of curtain to make a loop so it could hang comfortably around the neck.