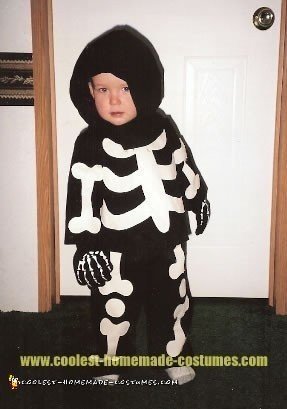 This skeleton costume was from a pattern from Simplicity. There were 4 different costumes in the pattern and I liked the skeleton the best.

I bought the black and white fabric on sale for about $1 per yard. I bought the gloves on a $1.00 table. They were a little big, but they glow in the dark and my son loved them. He was only 1 year 4 months when he wore this last year. The Simplicity pattern number was 4467.

You have to sew the bones on separately. You could use a bonding material and save the trouble of sewing them on, although at the time, I didn’t have any on hand. It took about one full day, including cutting out the pattern pieces and then placing them and cutting them out and then sewing it all together.

I really enjoyed makeing it and all the neighbors couldn’t believe it wasn’t store bought. In the picture, he doesn’t have any shoes on, but I chose a pair of boots that we already had. It was actually only the second piece of clothing I had ever made.