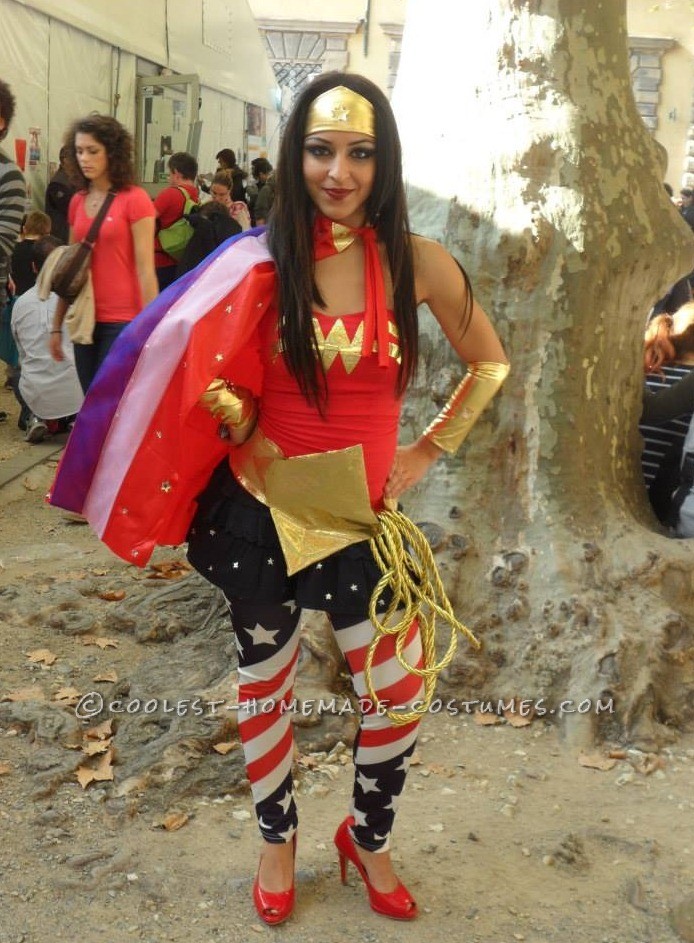 I introduce myself.
My name is Federica Marchini, a small provincial and simple at the same time smiling and bubbly girl of twenty-six, just celebrated, made yesterday, “November 6, 2013,” totally Mediterranean!
My dress taken from Cartoon Movies and Film Wonder Woman is entirely idealized, made, sewn and packaged by myself and the wonderful hands of my mother. the story of my dress comes from a bad time that I had to accept, understand and address precisely the last year. memory of experience severe stomach ache in the lower abdomen, headaches and dizziness especially concentrated in the lower part of the body from the hips to the ankles, scared I tried to investigate the problem, sottopondendomi to repeated blood tests and specialist visits. only in October 2012 discovered to be positive for the human papilloma virus Trezo stadium, already well advanced so dangerous to the cervix. I felt terrible from every point of view, namely physical, psychological, social, occupational, personal and intimate. I workers in March 2013. I did not want to go out, just the idea I became furious: I hated my make-up, wear skirts, tops, tight pants, dresses, and heels. I had become a stranger to my eyes and I could see anyone, especially family, friends and work colleagues. each of them may declare that it was not me that girl: according to them I was born in heels and jewelry as a bag walking. I bought at a shop in the area the fabric. crown, gloves and belt and applied gold stars, the red top in a fashionable shop where I applied the coat of arms of the character, the eagle, using double-sided adhesive paper gold. the whip of course gold is a braided cord to promote a strong and glorious grandeur, it is equipped with wonder woman showing her every American puntata.i leggings I bought them on e-bay and the blue skirt was in my possession since several years, to which I applied the silver bells, even the red cape had already bought a long time, I’ve stolen from my carnival suit by Roman warrior. to cloak my mother with holy patience sewed two strips of tulle, one blue and one white, and yellow stars, red and silver, some even fluorescent to resemble as much as possible to the true mantle of super heroine, and shine even at night!
this is my story … I went out gloriously from the tunnel of depression and today I feel happy, strong, responsible and radiant.
life is wonderful and to be lived every moment with a smile on his lips! Federica 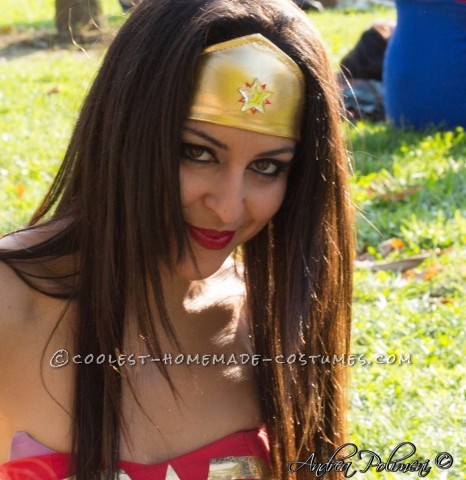