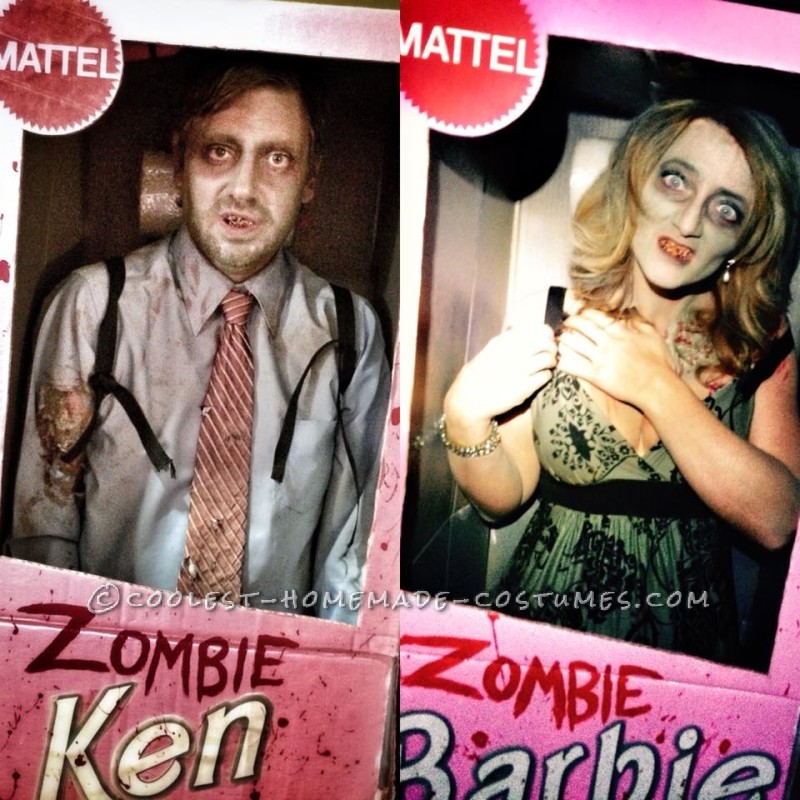 This is my husband Matt and I. This was the most fun costume to make and to wear, ever! I have been wanting to do this for a couple years now but always waited until the last minute and didn’t have time. I saw a regular Barbie in a box costume but I thought “this is Halloween! And Halloween is supposed to be scary!”. So I thought… ZOMBIE. We have a neighborhood party to go to every year. This is year #6 so its getting harder to come up with great ideas that no one else has done before. No way would I go to a costume party in a costume that someone has already done in previous years. We have pictures of everyone, every year so that doesn’t happen. And store bought costumes are not allowed in my mind. I am very picky about it!

I bought large Uhaul boxes thinking they would work best for walking around in instead of the bigger, taller ones. I did the cutouts and then attempted the painting with neon pink spray paint. That was a fiasco! The spray can leaked everywhere and looked awful on the cardboard. I started to get a little worried because of course early Oct I kept saying I had plenty of time. But by this time it was the Monday before the party. I had Matt stop at the paint store on his way home from work and he gathered a couple moms in the paint isle to help him pick out the best Barbie pink paint. I was kind of worried about that. But they did great and he came home with a can of flower power pink. We rolled it on that night. It was perfect! I put splotching gray on the inside that was more zombie like than Barbie like.

We printed out the logo and the names and glued them on. Along with some blood splatters and bloody hand-prints which you cant do without. And a barcode on the back. We used some straps and Velcro to strap them on use to be hands free. We have to be able to eat and drink! We bought all the clothes at a local thrift shop. Everything; dress, shoes, necklace and bracelet, suit and tie. It was pouring down rain and we took all the clothes and shoes outside and rubbed them into the dirt and the road to get them nice and dirty and ripped up just right. My husband had fun with that part. Destroying things is fun I guess. The clothes turned out perfect. Just like they were just worn as we dug ourselves out of the grave.

The most fun part of all was the makeup! I had a bunch of makeup from the party store and used some of my own. They make some great zombie kits. Matt tried to do his own but like I said, ”I am picky!” He couldn’t do it good enough. So after I did mine, I got to do his too. We did some wounds. One on my chest and one on his arm. Looked like a great big bite right out of him.

Now to put it all together, the clothes with the makeup and it was awesome!  We looked great even without the box. But then when we put the boxes on, Whoa! All of it together was perfect. We were impressed. So by now we were 30 minutes late for the party. We are always late. We loaded the boxes in the back of the car. Luckily they fit. It was pouring down rain and windy. I was panicked, our paint and makeup was going to smear all over the place. When we got there we had to park down the road a ways. Outside the car we tried to hold an umbrella and hurry and put our boxes on and strap in but the wind was blowing so hard it took my extra large umbrella and turned it inside out! So much for that. We ran in the rain to get to the front door. It’s always so fun to walk in and see everyone and their costumes and their great reactions to ours. Everyone loved it. We were told we had the best, most creative costumes of the night. The party was fun. It was a little difficult to talk to people and to move around. I kept bumping into people with my box. It was hard to have a conversation with people. But it was so worth it. My pickyness paid off and we had a blast!

We ended up leaving earlier than usual. I think it was the paint fumes in the box that gave me an awful headache. But that was worth it too! I love showing off our costumes and sharing the pictures with everyone that will look.

Now I’m worried about coming up with something bigger and better next year. I say I have a whole year to think about it but the week before will be here before I know it. 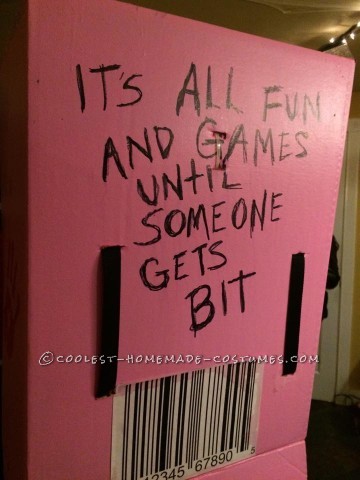 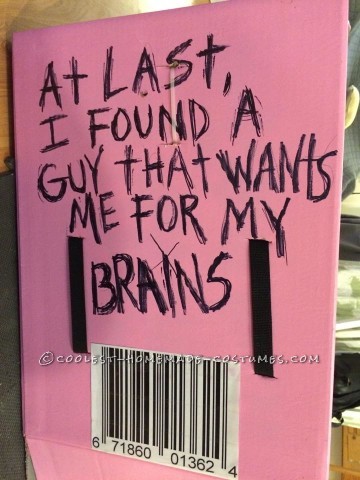