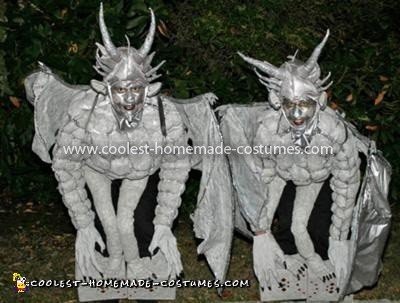 For Halloween this year, we dressed as ancient stone gargoyles. We’re perching on stone pedestals, also known as plinths. We recently flew off a cathedral in France and arrived in America to celebrate Halloween.

This Medieval Gargoyles on Stone Pedestals Couple Costume was completely hand-made, and they involved sewing parts of it, a lot of gluing, painting, and some adapting of a variety of store-bought items. The costumes involve an illusion, in which it appears that we have legs perching on the pedestals, while our real legs blend into the background.

We made the shirts look like the body of the gargoyle covered with stones. We first painted a large amount of gray felt with the stone paint. We then cut up the felt into squares, with rounded edges. Each square was around 4.5 inches by 5 inches.

We then took a small amount of stuffing, just enough to fit inside the shape while still being able to get the edges glued down, and glued the edges of the shape over the stuffing onto the shirt. This formed a stone shape on the shirt.

We then completely covered both sides of the shirts with these shapes. When that was dry, we used silver glitter glue to outline all of the shapes, and fill in any empty spots, sort of like mortar between the stones.

We first made the leg shapes by cutting the gray felt and sewing it in a tube shape that started wider at the top, and got narrower as it got closer to the bottom, and ended in a foot shape.

We stuffed the legs with stuffing and then glued a piece of wire onto the back of each leg, and covered it with a thin strip of felt glued on top of it. This allows the legs to bend. We then finished them off by painting them with the stone paint and gluing a black witches nail onto each toe.

We sewed the legs onto the black pants along the top of the legs, attaching them right under the band of the pants, so that the elastic waistband on the pants would still stretch. We also sewed velcro onto the bottoms of the feet, so they would attach to the rest of the costume.

The tail was made in the same way as the legs, by sewing gray felt, but we ended it in an arrow shape. We painted the tail with the stone paint as well, and sewed it onto the back of the pants.

We wanted our gargoyles to perch on a pedestal, but didn’t want to wear a box that would prevent us from moving around or sitting. We decided to use two boxes, one on each leg, that would look like one box when you put your legs together. You can either use boxes with covers, or if you don’t have covers, use hard cardboard to make a cover for each one.

Don’t attach the covers yet. The bottom of the box will be facing up, and the cover should close up the bottom when it is time. You need to carefully cut holes in the top of each box and in each cover. For the top hole, you want to put the hole on the back corner on the side that will be closest to your body. Otherwise the boxes will be in your way too much, and will prevent you from walking.

You want the boxes to stick out on the sides farthest from your body, and stick out in front of you as much as possible. Try to make the hole large enough that your foot can get inside, but not any larger than that. For the hole in the covers, make a hole that the top of the boot can go through, lined up with the top hole.

The cover hole will probably be bigger than the top one. Once you have the holes in both boxes, you can paint them with the stone paint. You might also like to decorate them in any manner you like with plastic jewels, to add a little color.

If you have black boots, great, otherwise we sprayed our rain boots black with black spray paint. To attach the boxes to the boots, we first took the cover, which is not attached to the box but has a hole in it, and put the boot through it, and just let it sit there. We then attached the rest of the box to the boot by putting a needle with dental floss through the boot and box and back out again, and tying knots.

We did this three or four times on the sides the boot was touching the box to secure it. We then pulled the cover, which was hanging out at the bottom of the boot, up to meet the box, and glued it on. When this is done, each box should rest on the top of each boot, and you should be able to put your foot through them and walk around. We also sewed on a strip of velcro to match the feet, in order to secure them to the boxes when we’re walking around.

For the headpiece of the Medieval Gargoyles on Stone Pedestals Couple Costume, we bought a hat topper intended for a dragon costume. It was red and black, so we spray-painted it silver. We covered the horns on it with silver glitter glue, and added some stone paint accents. To keep the hat on better, we sewed on strips of the silver satin to tie into a bow on our chin. We also needed a hood to cover our hair and head. We decided to use silver satin rather than felt in order to make it less scratchy.

We cut the shape out of the satin and sewed it into a hood, which closed up around our necks with velcro. We purchased ears, actually intended for an Avatar costume. We spray-painted them silver, and painted the insides with the stone paint. We then sewed the ears onto the sides of the hood.

To make them stand up better, we pushed floral wire into each one, and wrapped it around the horns on the hat toppers. To wear it, we put the hood on first, then the hat topper, and hid the string of the hat under the hood.

We purchased large beast wings, which were black and purple. We spray-painted one side with silver spray-paint and painted the front side with the stone paint. We also outlined the front in silver glitter glue, as well as the lines down the middle.

For the hands, we purchased ghoul hands. We painted them with the stone paint. We wore black gloves underneath, with the hands just laying over the top of them, so we could still use our real hands. We glued the black witches’ nails on the hands as well, to match the feet.

Finally, we completed the costume with a fancy make-up job. We purchased prosthetic noses and chins, which we glued on with spirit gum. We painted our whole faces silver, and used special makeup stone paint to create patches of stone here and there on our faces.

We added some black glitter over the stone makeup, to give it even more of a stone look. We drew green crayon circles around our eyes, and used black lipstick. And our Medieval Gargoyles on Stone Pedestals Costumes were complete! 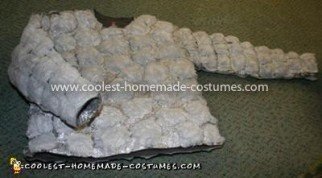 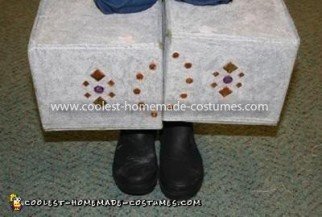 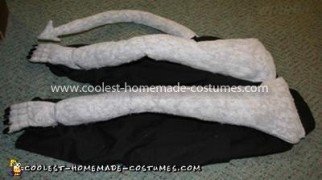