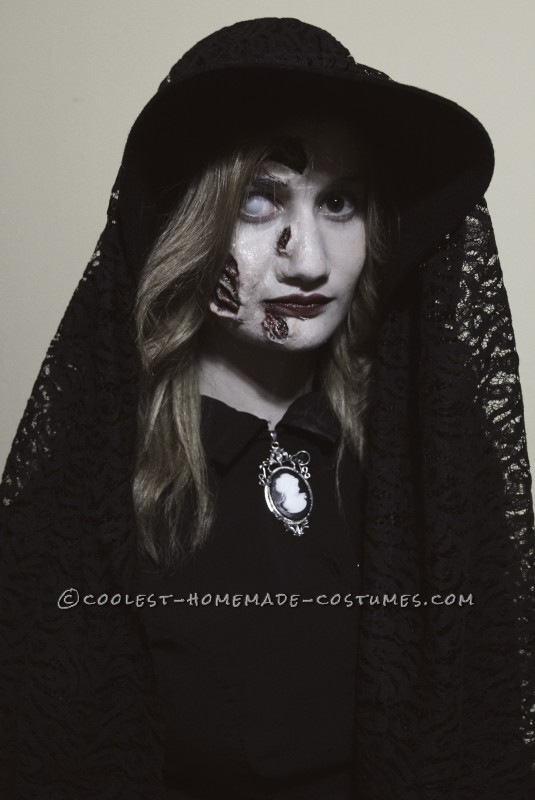 The thing is I’m a True Blood fan, I love vampires, and one day I thought to myself, what if I make the vampire character Pam, but not just that simple character – there is an episode in season 4, that involved witches, and these witches where against all vampires, and Pam the vampire went to confront them and they cast a spell on her. The spell made her entire body started to rot, and she had to cover up her body with a black dress, black gloves and a black hat with veil, so no body could see her disgusting face and body rotting. So there was my Halloween costume idea (I didn’t care that only True Blood fans where going to recognize me, because the costume she wore in that episode is awesome), so I went for it.

First I bought a black hat and lace fabric to compose the hat, then I went to a seamstress to make my black 1800’s dress. I bought black lady gloves and white contact lenses for the creepy eye. I had all my costume done for Wednesday 29th, the party was November 1st, the only thing left was the make-up to do the same day. It was November 1st – I had classes from 9am to 6pm and the party was at 7pm. Clearly I wasn’t going to arrive on time, first because my make-up was going to be complicated and second because I was going to the party with my boyfriend and I had to do his make-up too (he was going as Darth Maul, Star Wars Character) which was tricky too.

First I did my boyfriend’s make-up and then I started with mine. I was so stressed for the time and worried that the make-up turned up wrong.  But finally 2 hours and a half later I finished. I was happy, both of our costumes were awesome, we arrived at the big Halloween party at 9:45pm, people where actually scared of my costume (no body knew what I was) but at least they were scared and wanted to take pictures with me and also with my boyfriend because people actually knew who he was, haha.

I was very satisfied with my creation, I think I did well. I posted pictures on Facebook and people were actually amazed and reached over 100 likes, so yeah great Halloween this year! Loved my costume and I really enjoyed doing it. 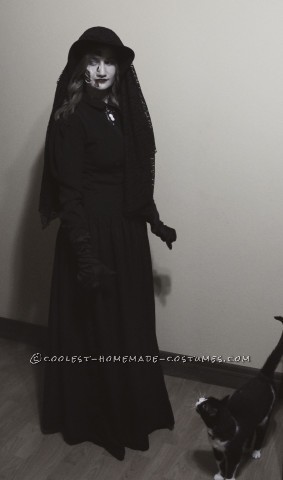 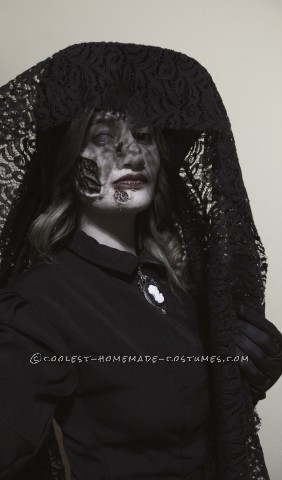