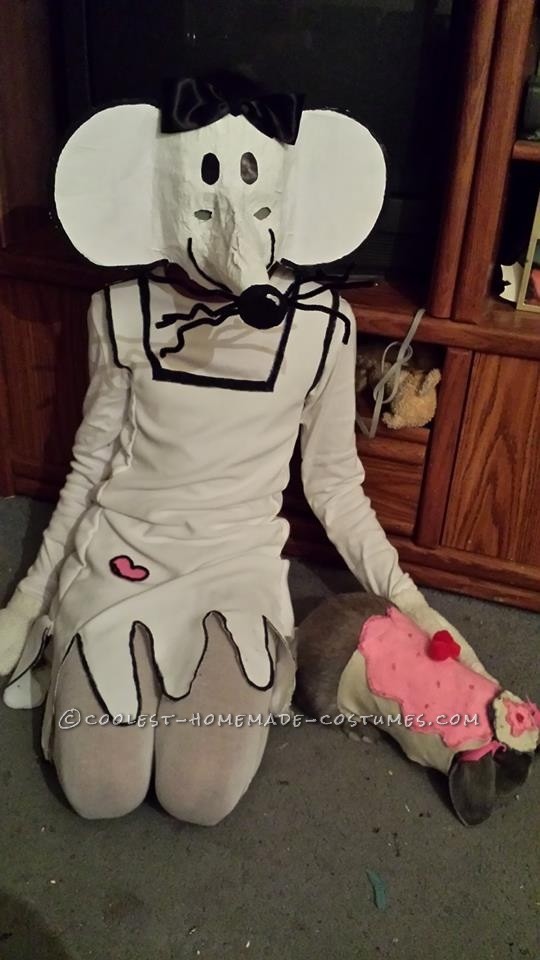 As always…I start every costume by sketching everything out. Persia wanted to be Babymouse this year (2013). Babymouse is the main character in a kid’s comic book, written by Jennifer L Holm and Matthew Holm. Persia LOVES these books. This was her choice for Halloween this year.

DRESS- I made a pattern for the dress using measuring tape and newspaper.  I laid out the    fabric, pinned down the pattern and cut out the dress and sewed the sides.  Using black paint I outlined the dress.

I cut out a pink heart from some felt and lined it with black yarn…gluing it down with craft glue.

FACE MASK-   I used a blank plastic mask and tin foil (the foil was to make the mask bigger and pliable). I then covered the mask with paper mache.

I added the nose, making it  a cone, from lite cardboard. I painted the mask white. I cut out ears and stapled them to the side of the mask (then painted them white also)

The nose was cut out of sponge and painted black. Once dry, I crazy glued the nose to the end of the cone. I added pipe cleaners for whiskers. Black outlines were added to the ears. Black eyes made from lite cardboard, coloured black and then glued down. Black wool glued down for the smile.

This costume took two weeks to make and it got rave reviews. Persia was a walking cartoon. This was a success.

Babymouse loves cupcakes so Persia made a cupcake costume for her bunny, Lloyd. 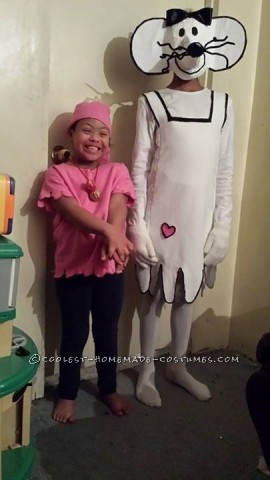