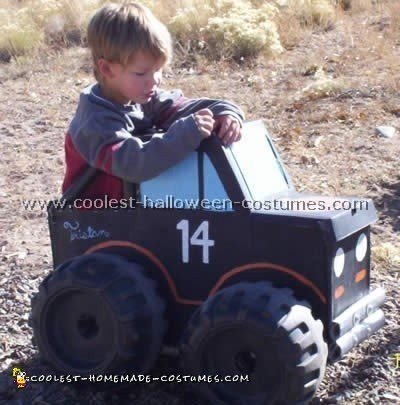 This costume came about because my son Tristan wanted to be a monster truck for Halloween. I actually tried to talk him out of it because how do you make a monster truck and we only had one week left until Halloween. Then I found this box, it was perfect. So my husband and I, with no knowledge on creative costumes, started this project.

The box was the perfect height so we just cut the top of the box to look like a truck and then got another box and fitted it to be the hood, windshield, and roof and back window. It was one solid piece that we just bent at each bend in the truck. We used a pizza box so the hood flap was just the front of the pizza box. We cut the piece to be about a half inch wider than the truck so we could bend and glue the sides for stability. We also made eight tabs that were about 6″ by 2 “. We bent them in half and attached them to the inside of the truck so when we put the hood roof and windows on we could have something to attach them to. Then we folded the extra half inch width down and used Elmer glue and a glue gun to connect them.

Then we took some more pizza boxes to reinforce the box around the tires and any weak spots. We bought nuts and bolt to further attach everything to make it secure. The front bumper was just some old wrapping paper rolls that we had around the house and painted them silver and attached them with nuts and bolts. The tires we were going to make ourselves but we ran out of time so we had an old hot wheels four wheeler that was broken so we took the tires off and used those. We just attached them with some longer bolts. After that it was just too heavy for him to carry so we made some straps and thought that he could just stand inside and push it. if we made the straps long enough but he hated it and would not wear it. So then I was so bummed I thought it was a bust and we were trying to find him a different costume.

We were all so sad because it would have been the coolest costume but then I found this other truck and it fit on there just perfect and he could sit right in it perfectly so we cut a hole in the engine and stapled his candy bag inside and added a string for him to pull so he would say trick or treat and pull the string and all the people could just put the candy under the hood in his candy bag. It turned out amazing, everybody that saw it wanted to stop and take pictures. All the other kids were so jealous. It turned out perfect. We had to push him but he liked that anyway so with a lot of glue, a box, some paint from around the house and some old tires we never thought we would use again, we made a monster truck. The roll bar was a wrapping paper roll with some electrical tape that I got from the dollar tree for a dollar.

It was totally worth the time and effort and just remember if your creative costumes don’t come out the way you plan, keep your eyes open around the house, you never know what can end up working better than what you thought in the first place.

My three year old son is very in to monster trucks especially Grave Digger so when he wanted to be a monster truck I got a little nervous about how I was going to make this creative costume work. To my surprise it wasn’t bad at all right down to the working headlights. Most of the supplies I had at home so it was pretty cheap.

I pulled a picture of Grave digger from one of my son’s magazines and went to work on this creative costume. Once you find a box that fits, fold all of the top flaps in and cut the bottom flaps off, poke holes in the inside for your rope to hold the truck on. Take the second box and cut a largo side piece out of it. Start to bend it the way you want the front to look. This will be the longest part of the project; it takes some time to get the cardboard to bend. Once in shape, cut slits in the front of your hood and bend them down, this will be where you glue your lights. Glue this piece to your box.

Get the foam out and cut your tires out. Spray your box black along with the tires and the paper towel roll. Glue your foam tires on. Spray the center of them with the silver paint. The paper towel roll will be the front axle to keep the tires from falling in. cut a small piece of card board for the front bumper. Add the flames and other designs. Glue on and paint the white led lights with red tempra paint. Personalize your license plate and glue it on. Glue or Duct tape the inside flaps of the box down to keep the ones with the rope in them from flipping up. I used little Velcro strips to pull the ropes together at my son’s chest and his back to keep the straps from falling down.

Throw on the black clothes; spike the hair and spray it green and you are good to go! In all this took about two to three hours from start to finish. I sprayed the silver and green spray paint on a plastic plate and used small paint brushes to do all of the artwork and flames. It dries really fast and the color stays bright against the black and used tempra paint for all of the other colors.

I hope this helps a lost mom like I was. I could not find any help with how to make this creative costume that is why I want to share it. It stopped people trick or treating they would come over to see my son. The reaction from my son when he wears it is priceless. The few hours it took were worth it!