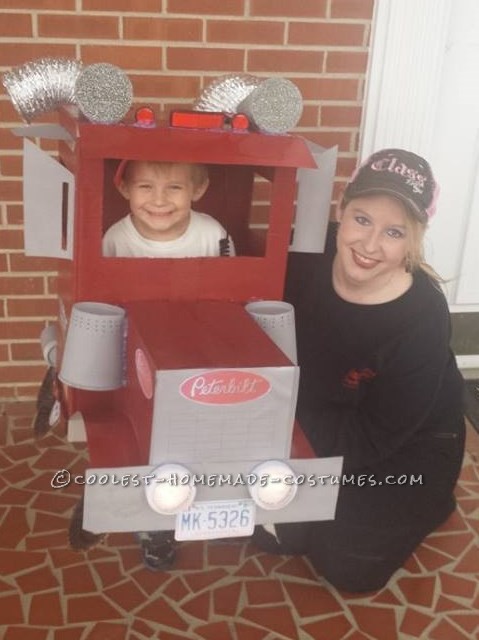 ATR Express, LLC was a dream of my son & daughter to start in memory of their Pa Cannon, my dad. He was Co-Owner of Cannon Brother’s Trucking with his brother Billy for many years. As small children, they had grew-up in the trucking world, their Pa Cannon owning a trucking company and their dad being a diesel mechanic.

Family has always been important in our lives, and trick-or-treating at Halloween is one of our fun family traditions. We still laugh to this day, because the men always have to be the “testers” for making sure there is nothing wrong with the kid’s candy.

My daughter Di’anna had a brilliant idea just a few weeks before Halloween 2013. She wanted her 3 1/2 year old son Braxton, who loves the family business, to have a Peterbilt truck for his costume. In the past, we would go down the road and he would always talk about a Mack truck, until recently he has fell in love with the red Peterbilt.  With only a few weeks away from Halloween, our brains began to storm. We began to look for ideas through images Di’anna found, and thinking of items that we could use to make the costume out of. Of course, Di’anna didn’t want just any truck costume! This Peterbilt truck costume needed to look just like one of American Truck Repair Express, LLC trucks.

Only a few days away from Halloween, we began to collect items we wanted to use to make the costume. First, we started looking around for boxes to use for the hood, cab, and 5th wheel. We used a total of 4 different size boxes.  Then, red, silver, and black spray paint were chosen to match ATR Express, LLC truck.  Next, were two cardboard popcorn containers for the air breathers, two styrofoam floral cones for the horns, two recycled Diet Pepsi cans for the fuel tanks, bicycle light reflectors for the red lights, two round battery operated night lights for the headlights, electrical wiring loom to shape for the top of the 5th wheel, 6 small party plates to use for tires, one dryer exhaust pipe cut into for the exhaust pipes, and gift boxes were used to cut out two mirrors and visors for over the windows. The gift boxes were also to be used to make a steering wheel, but it is one item we forgot to make. I used a hot glue gun to glue everything, except for the photos I used stick glue.

On October 30th at 9:30pm the designing part began. I worked on the project for a total of 15 ½ hours. We have a saying in our family that Braxton’s Gramps can build any diesel truck “from the ground up”.  WOW was it a job to “build” the red Peterbilt truck “from the ground up”.  I did all of the project except the spray painting. At 1:30am, I took the hot glued cardboard boxes to American Truck Repair, LLC to have my husband spray paint for me. Braxton’s Uncle Trenton, who is Co-Owner, helped spray the air breathers and collect Braxton a CB radio and cord. Trenton was like a dad on Christmas Eve. He was so excited that Braxton was going to represent the company as he trick-or-treated it was hard for him to concentrate.  Trenton, like his sister Di’anna, wanted everything about this project to be just like the ATR Express, LLC red Peterbilt. He would say, “Don’t forget the truck has —–”.  It was a joy to see family members work together to make something as simple as a costume become so important.

On October 31st, Di’anna brought Braxton over to see his costume. At this point, there was still a lot more to do before the finishing touches were made. Braxton was so much fun to watch. As I would work, he would say, “Grams, when is my truck going to be ready?”  He would leave the room, and in a few he would be right back saying, “Grams, when is my truck going to be ready?” I just had to chuckle at him. He reminded me of the truck drivers who have to sit for hours at a time waiting for their broke-down truck to be fixed in the shop. They usually ask several times when their truck will be ready. As the end was approaching to be done, Braxton came up with one of his own ideas for his Peterbilt truck costume. He said, “Grams, can you put my name on my truck?” I replied,  “Yes, Braxton I can put your name.” Braxton then replied again, “Thank You Grams!” Though the hours had been long and hard, Braxton still managed to make the tiredness go away as he brightened my day through his excitement for “his” red Peterbilt truck costume.

The time came only one hour before the area churches Trunk-or-Treat would start, that the red Peterbilt truck costume was finally ready. It surely favored American Truck Repair Express, LLC red Peterbilt truck except it uses diesel fuel and Braxton’s uses two feet to move.

We went to several churches and then to the local DMV office. The DMV office gives the children in the area treats, and a special night by turning on the lights on their patrol cars. They were all giving out treats, and then they began to turn and see two bright lights coming their way. It was like a chain reaction. One would look, then another, and then another, to see what was coming. When they realized that Braxton’s costume was a truck, they were amazed. They even spoke how he had his DOT numbers, his tag, and asked about the business he was representing. One of the officers said, “I think he wins the best costume prize tonight. Let me make his picture.” She then, had him turn to get another view for a photo. So we really don’t know, if they had a costume contest going on, or if the officer was just thinking that he was the best costume that had come through their line. It doesn’t really matter either way, for you see just the officer thinking Braxton had the best Halloween costume was enough for me.  The “love” job was complete. 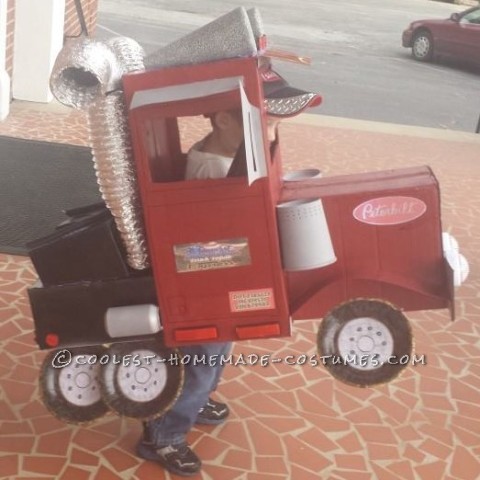 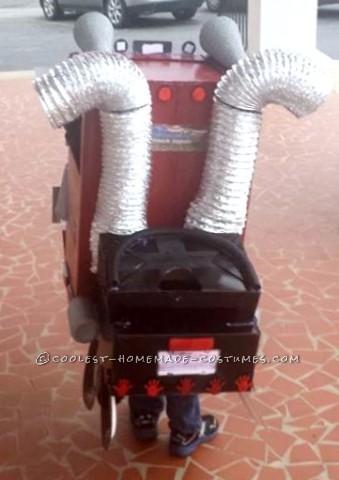