My 6 year old son is obsessed with monster trucks. Grave Digger is his favorite. So, he asked me if I could make him a homemade Grave Digger Monster Truck Halloween costume. I’ve never turned down a challenge, so I said yes. After making a costume for him for the first time last year, I figured it was worth a shot.

I started with the basics (deciding what materials to use). Since we recently moved I had tons of cardboard boxes. I used his toy monster truck as a guide for the body. I cut out two pieces of cardboard for the sides and another two pieces that were a bit shorter for the front sides. I then cut out two more pieces for the front and back. I carefully used duct tape to connect them all and build the basic body of the truck. I taped both the inside and outside seams to make it sturdy.

I used a black piece of poster board and cut out pieces for the front window and two side windows (I did this, so it would be a different color black to distinguish a difference in body color and window color). I used clear packing tape to cover it, so it looked like glass and also to make it water proof, just in case it rained Halloween night. After some trial and error I decided to use small wooden dowels for the “frame” of the truck and also to use them as axles for the wheels.

I used washers and screws to keep the body and wheels in place. I then cut out 8 circles out of cardboard for the wheels (I used the bottom of a bucket for the size) I cut out a 1/4 inch whole in each one to secure them to the “axles”, I stuffed the wheels with bubble wrap to get the thickness of the tires, then used black duct tape to hold its shape. To get a uniform circle for the hub caps I traced out a circle (on a paper plate) from a bowl, then taped the circles with silver duct tape and taped them on the tires.

I bought two battery operated LED push lights for the headlights and covered them with red auto tape to get Grave Diggers red headlights, just right. It was also great for safety when trick or treating. My son lead the way the whole night. I cut out folded green poster board for the flames design. I folded it, so I would get the same design twice instead of trying to duplicate it by hand. I used regular paper and marker for the Grave Digger logo and Bad to the Bone logo. I cut out each letter and taped it with clear packing tape, like a sticker.

For the skull and haunted house, I printed out the image and cut it out and again used clear packing tape like a sticker. I decided he needed a “drop zone” for his candy, so I cut out a square in the back and taped a regular candy container to the bottom inside of the truck for his candy to be dropped right on. I thought this would be extra cool, since that is also where the trucks fuel would be stored ;-).

After many failures trying to attach straps to the costume. I put in a small frame on the top with the dowels, so I could attach the elastic straps right at the top. I folded two pot holders over the shoulder area for extra padding and used back duct tape over it.

All in all it was fairly light weight, totally water proof and pretty awesome! He was a hit trick or treating. He had cars stopping to check it out and some of the people passing out candy asked to take a picture of him. He had kids young and old all telling him it was the best costume they had seen. Besides making my son the happiest kid in the universe, it was extremely gratifying to know he was recognized as Grave Digger. I knew I had done my job, when everyone knew exactly who he was.

I was nervous to take this on, but I am so happy I did. It gave me the confidence to try another homemade costume next year. It’s nice to see my child in something unique and to know I didn’t have to spend an arm and a leg to do it. 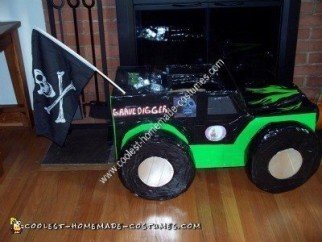 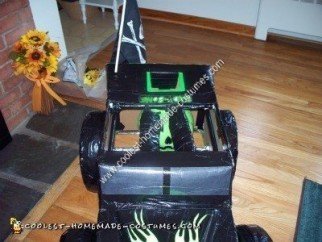 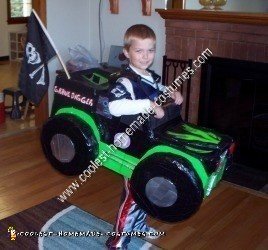