Welcome to the Krusty Krab. My 3 year old son has been asking to be the money lovin’ Eugene Krabs since the Easter bunny came! He wanted his daddy to be SpongeBob so he could tell him to “Get back to work.” I started to make the costume in September by constructing the body out of paper towel rolls, poster boards and what seemed to be 100 balloons.

I tried to keep the shape of the body by filling it with different sizes of balloons. So every time I would add a layer of paper mache or turn it, all the balloons would come tumbling out and I would try to catch them flinging paper mache paste all over my kitchen floor, wall, table and balloons. By the end, I had to pop all the balloons that were stuck together from all the glue. After he dried, I broke out the trusty sewing machine and got to work on the eye covers made of felt and tailoring the shirt and pants I purchased from Goodwill (Mr. Krabs wears a size 24 in ladies).

I then covered him with red felt and entire bottle of Elmer’s glue! The teeth are made from the wax layers that come in Whitman chocolate boxes. My son tried in on and tried to bite the teeth because “it smells like dandy momma.” His belt was made from black ribbon and the buck was felt hot glued and velcroed. Inside this thing looks like how Patrick smells! He has duct tape and a hula hoop to help keep the shape. The shoulder straps are duct taped velcroed and hot glued. All the details are hot glued. His poor pupils would fall off if you looked at it wrong. Finally with a whole stick of hot glue, they stuck. His arms and claws are sewn and stuffed with PolyFil. He wore red shoes for his feet.

We painted his face red with cream paint *shakes head*, that was a disaster. We tried everything to get that stuff off. He had to go to Preschool the next day with a sun burned looking face. It took baby oil, dish soap and dove bar soap to get the red off. He walked in the Halloween Parade with his Daddy (He was SpongeBob) and you would have thought he was a celebrity. He danced to the marching band drums and would wave at all the people who were yelling “SpongeBob and Mr. Krabs!” with all the flashes from the cameras. I think we had to stop and take about a 100 pictures. On trick or treat night, he would walk by a group of people and tell them to get back to work or make a pinching motion with his claws and say pinch, pinch, pinch. The reaction from the other ghouls and princesses were fantastic, everyone deemed him best costume of the night.

He carried a money bag for his trick or treat bag. I had a good time making this costume. Granted there were times I wanted to set it on fire, but I am glad I put the lighter fluid down and picked up the glue gun! Without it, Mr. Krabs would have never been possible. But it was all worth it when I saw my son turn into The Krusty Krab owner Eugene Krabs. 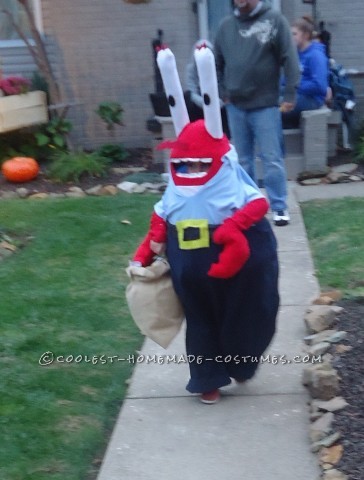