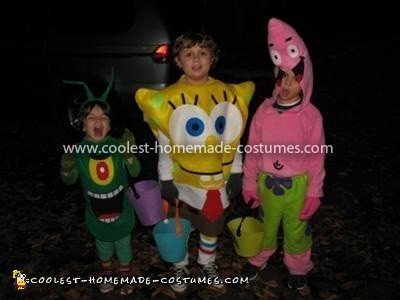 My oldest (he’s 8) is obsessed with Spongebob. And I insist on theme costumes, so this year I made my 3 kids characters from Spongebob. For the boys, it was obvious– Spongebob and Patrick. For my daughter, I really wanted her to be Plankton, ‘cuz she’s tiny! :)

[Spongebob:] I had my son lay down on a large piece of cardboard so I could mark where his head, shoulders, arms and waist were. I then drew a Spongebob shape using those guidelines. This became the pattern piece. The Spongebob costume was made with felt. I cut yellow felt from the pattern, the brown and white felt I cut to fit with a rotary cutter and quilting ruler.

I then used a pic of Spongebob as a guide for cutting out the shapes of his features. A large plate worked well for the eyes. I used a sewable heat and bond for the appliques.

Once I had all the features in place, I sewed the front and back, right sides together, leaving openings for the head arms and legs. I turned it right side out and pressed the seams a bit to make sure the curves would stay as I had intended. On Halloween night, I used some fiber-fill to stuff the shoulders so they’d keep there shape. The legwarmers I made from fleece.

[Plankton:] I made this one pretty much the same as the SB. I had my daughter lay down on a piece of cardboard to get her measurements and make a pattern piece. This piece was just oval. Again, I referenced a picture to get the shapes of the features.

On this one, I only sewed the sides together and put snaps at the shoulders. The antennae were made using a $2 reindeer headband from Target. I stripped the felt off, keeping the felt from the headband piece as a template. I cut down the stabilizer that was in the headband and put pipe cleaners into the base. Then I cut green felt in a cone shape to encase the antennae. I used the felt template to cut green felt to encase the headband. I sewed the bottom edges, and hot glued the rest in place.

[Patrick:] I used a pattern for sweatpants and a hooded sweatshirt for this one. I just altered the hood shape to get the shape I wanted. The appliques are felt and were again created using a picture for reference. The pants, I just made green sweatshorts and then sewed in the bottom of a pink pant leg. Again, the appliques are felt. On Halloween night, I stuffed the hood with fiber-fill so it would stand upright.

Truthfully, this was a team effort. My husband made and cut most of the patterns for me and did a lot of my shopping for me, too. I had put this off to the last minute and didn’t get started making the costumes until October 24th — and they had a costume contest to go to on the 28th. Oh, and I work full-time. It was a sleepless week, but I’m super happy with the outcome– even though they didn’t win the contest. 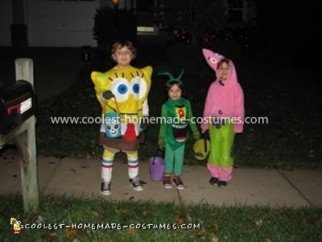 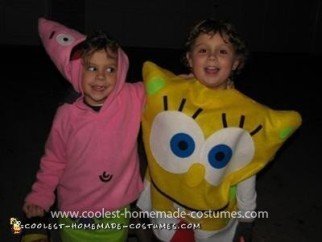 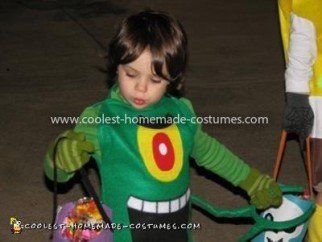