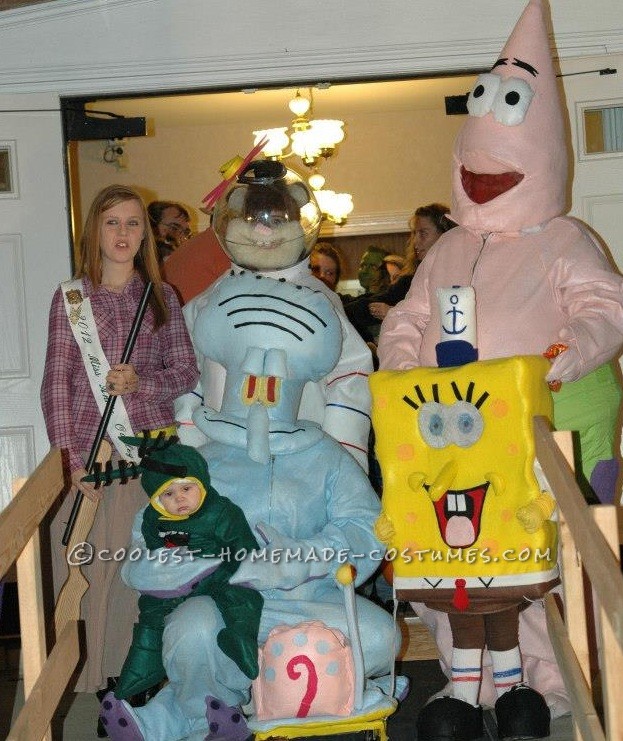 I have a 3 year old grand baby that lives with me and was watching Spongebob on TV.  She said, “Mammal can I be Spongebob?   So I sat down one weekend and had a box and started cutting it out.  I wanted to make a costume for her but not spend a boat load of money. I purchased a yard of yellow felt that was on sale for $2.99 a yard after doing a lot of thinking about how to make the box look like a sponge.

I came up with cutting some water noodle (that we already had for the pool) in half and glued them to the sides and top, used some white foam sheets that I got from work that were in the trash to help cover the noodles.  After covering   that with the felt I used and old white sweatshirt for the sleeves, a pair of white tube sock for legs and a pair of old brown leggings for bottom of the pants.

I purchased 8 pieces of felt for the colored parts that cost about $.25 a sheet. For the shoes I used about 4 sheets of black felt and a couple of large sheets of plastic canvas that was about $3.00 and an old pair of shoes.  She told me that Spongebob needed a Krusty Krab Hat so I took 2 pieces of white and 1 blue felt and came up with his hat. So all together I spent under $10.00 on her outfit.  When we went to a Halloween Party the little kids actually thought she was the real Spongebob and wanted to hug her! 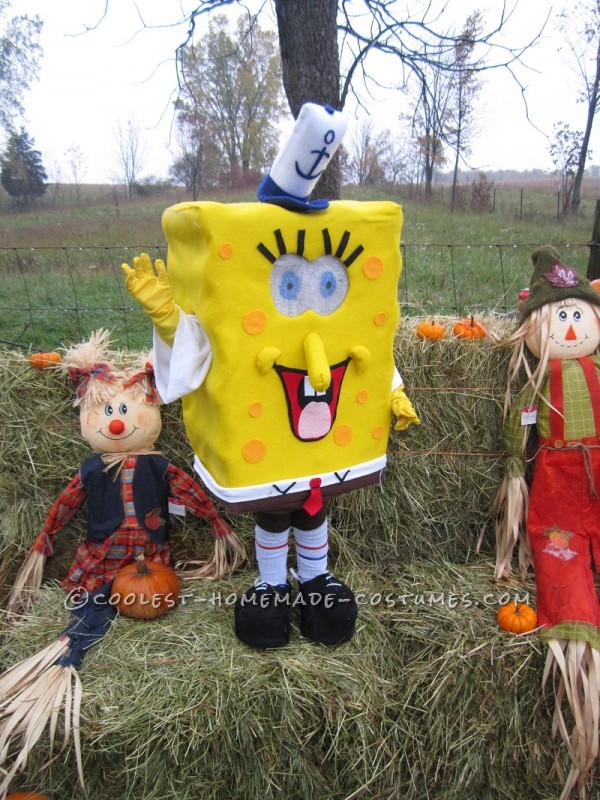 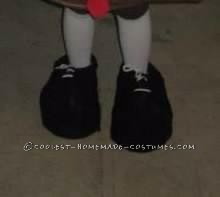 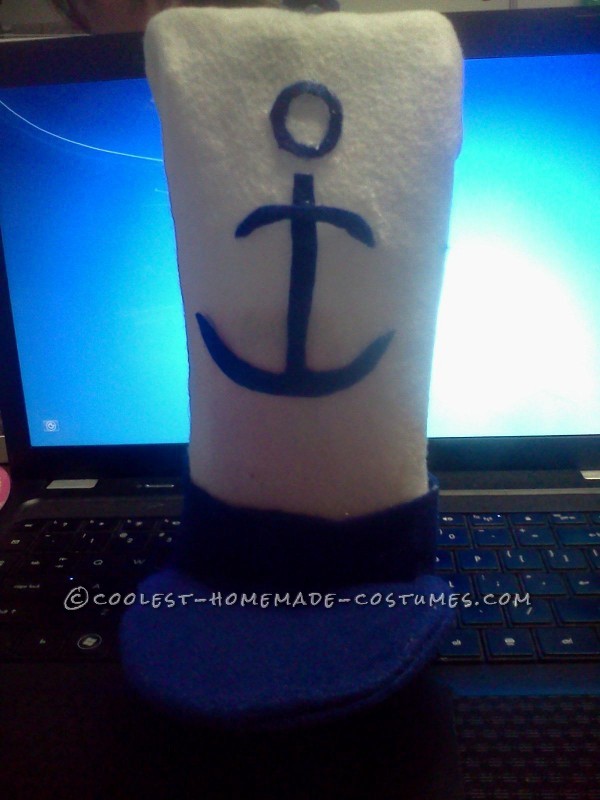 Then I was asked what costume I was going to make for my grandson, so we came up with Plankton.  I found a used pattern for $.50 and purchased a yard of green felt and about 4 pieces of colored felt and proceeded to make it. I spent about $5.00 on his costume.  That was the easy one. 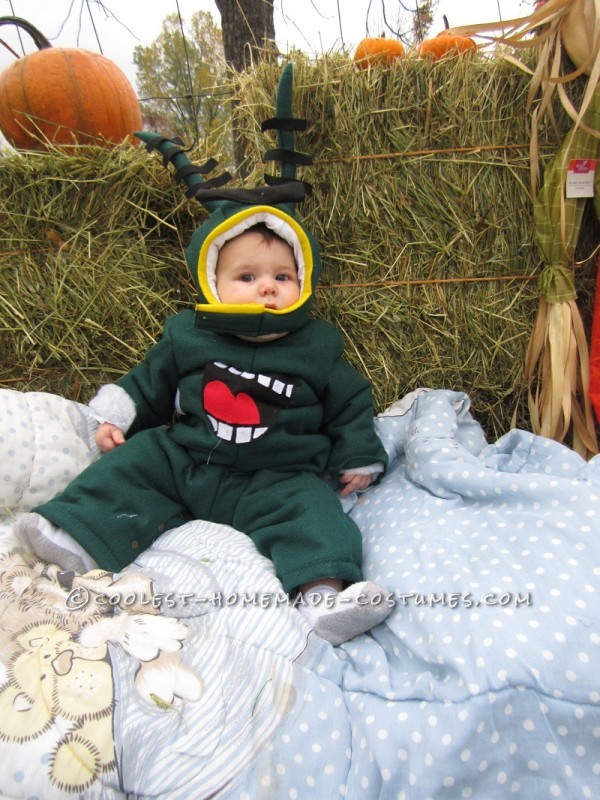 Then my daughter and I decided we might as well dress up so she choose Squidward and I choose Patrick.  I work 3rd, and I when I couldn’t sleep I would sit up and sew.  I went and purchased some plastic canvas and sat up one weekend and cut out pieces and connected them together to try making the faces, after watching many you-tube videos to get some ideas, I went to work on making them. When I got the shell of them done, I placed them on the back of a chair.  I woke up to hear my daughter laughing at them.  I used the stuffing out of some old pillows for batting, then took felt and covered it, I used a piece of screen to make the eye holes to see out of and painted them with some old paint we had around the house. 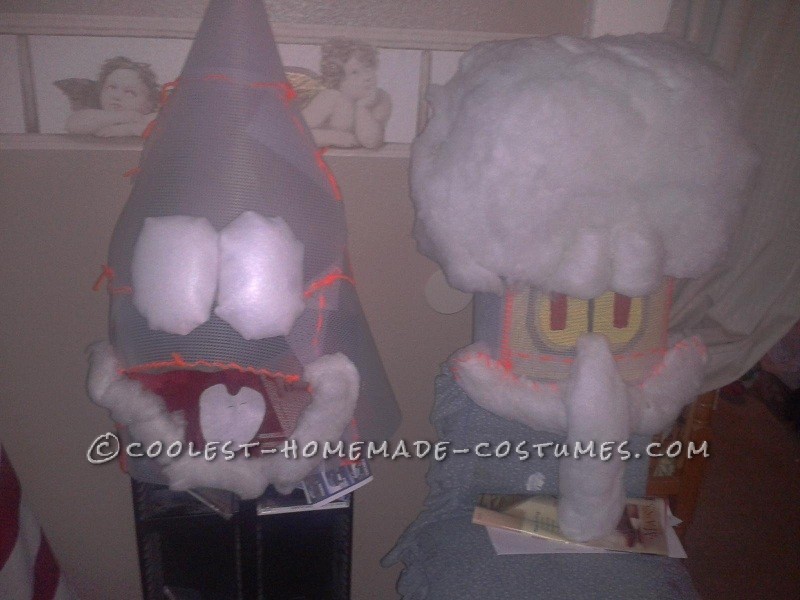 The Heads of Patrick and Squidward

I purchased a pattern for $1.99 for the bodysuit and purchased 3 yrds of blue/ gray felt for Squidward’s outfit.  I used the same pattern for Patrick except I had to make some alteration to the pattern to make the suit look like him.I purchased about 5 yards of pink felt to make Patrick’s suit.  I had some old zippers that I used them for the suits, I made gloves to match the outfits, and used some scrapes of purple felt for the dots on the gloves, and I revamped the shoes covers to look like Squidwards feet and added an extra one so he has 4 feet, and I used a couple sheets of plastic canvas to make a copy of her shoes to fill the extra foot.

We purchased an old pale green polo shirt at goodwill for $3.00 to finish up Squidward’s outfit. For Patrick’s outfit I used a hula-hoop that we purchase for a $1.00 and wrapped it with the stuffing of an old pillow.to make the belly stand out.  I purchased some lime green material and 4 pieces of purple felt, and took the same pattern and to make the shorts. I had about $40.00 in our two outfits. We tried them on; I don’t think I have ever laughed so hard in my life. 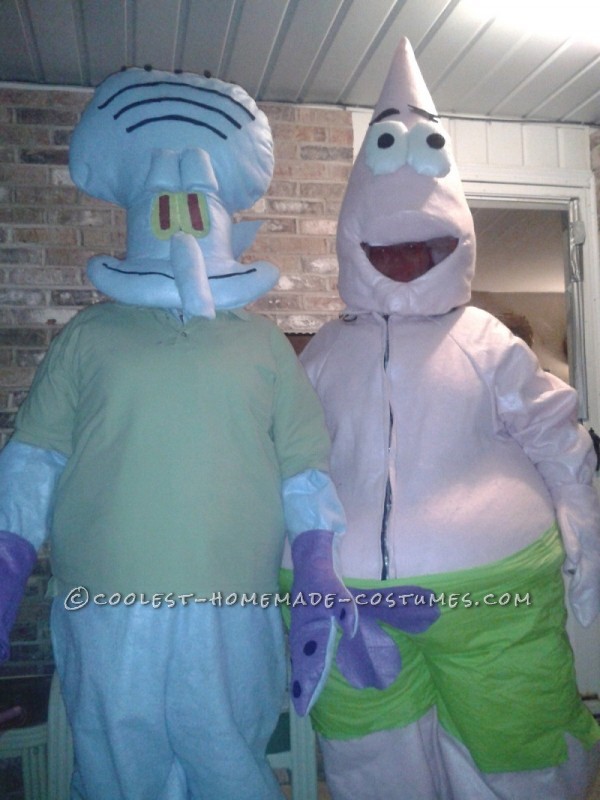 So I thought I was done, wrong, my 19 year old decided to challenge me to make Sandy. The body was the easy part, I use a yard of white felt and a round laundry basket, used the same pattern to make the suit, she had a pair of white stretch pants for the legs.  I purchased some fake fur and used the same pattern to make the head piece/mask.  For the shoes I used and old pair of boots and plastic canvas and covered them with gray felt. Now came the challenging part, the bubble. I found some large clear bowls and a kind maintenance man at work cut the top and bottom out for me and I glued them together.  When we put them over the fur mask, it made it very hard to breathe, so I went to a computer repair store and they gave me an old PC fan and we hooked it up to a 9 volt battery and I cut it down to fit in the top part of the bowl. It allowed air to flow into bowl.  Made a flower to place over the fan and hold the battery. I spent about $25 on her costume. 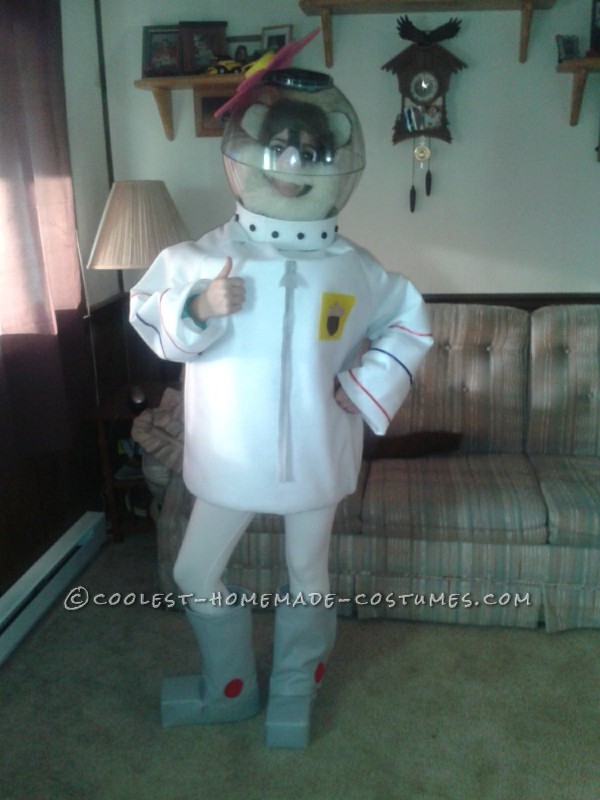 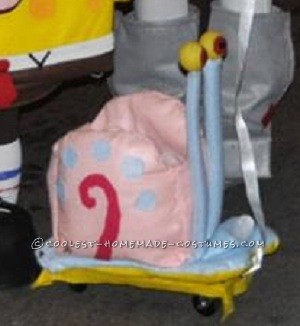 So after making 5 costumes and a basket, I only spent about $80.00 on all the costumes.  I am pretty proud of the outcome. We walked in our local Halloween Parade and had a lot of fun. So here is my version of  the SpongeBob gang. 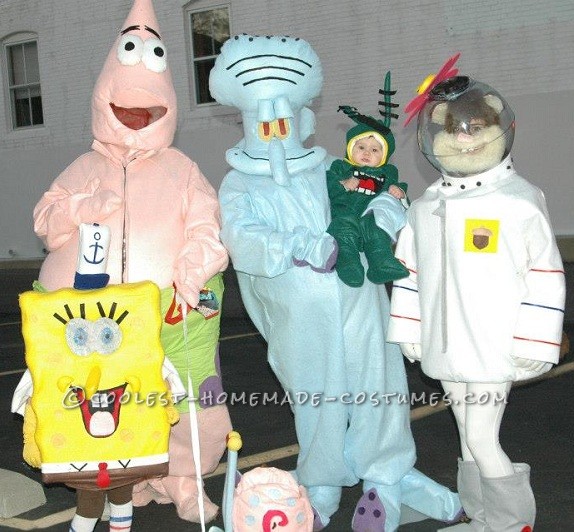 1 thought on “Coolest Homemade Spongebob and the Gang Group Costume”