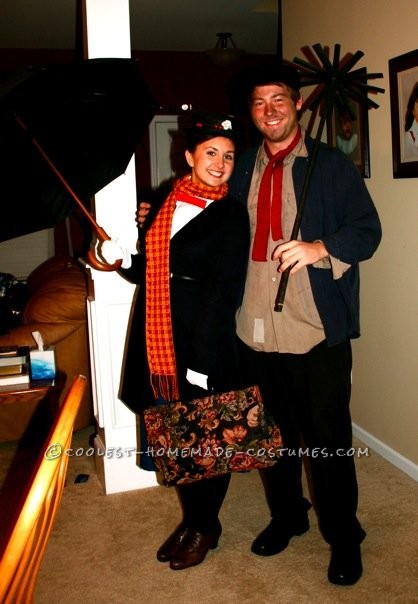 I always go all-out for my halloween costumes. I spend months and months before the big day scouring Goodwills and consignment shops for just the right piece that will complete my costumes. My Mary Poppins costume was no exception, and it was probably my hardest challenge. Every piece of clothing, down to even the shoes, was something I had to find in various shops. I also did a lot of tailoring to make the pieces look just right. I even had to get a new umbrella! I stole one of my little cousin’s hats and stuck flowers in it to make it look like Mary’s. I made the carpet bag from scratch! I had worked so hard on this costume, and my boyfriend was impressed but I assumed he wasn’t dressing up for halloween. So, to my suprise, he showed up that night dressed like Burt the Chimney Sweep! He even rubbed dirt all over himself for effect. It was so awesome that he would do that for me and surprise me like that. We were the hit of the night with our awesome costumes.