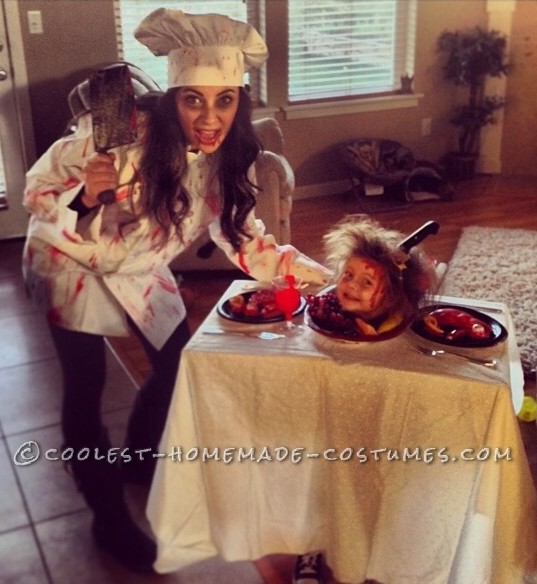 I have a twisted sense of humor and love all things horror. So, that brought me to my idea for the perfect mommy-daughter costume…a killer chef with her head on a platter dish!

As the weeks to Halloween started dwindling down, and I was in the process of making our costumes, my 2 year old daughter, Sophie, was asked numerous times, “What are you gonna be for Halloween? A Princess?”  And her reply was, “A table.”  Ha! The confused looks I got from her response were priceless. Even more so priceless was peoples reaction after I explained to them in detail what she meant by “A table.”

The best reactions were, of course, on Halloween. We entered her in a toddler costume contest at the children’s museum here and Sophie, my little head on the platter, was the standout in a sea full of Princesses and Superheroes. And she won!! We trick or treated thru the mall and she was stopped about every 5 minutes to have her picture taken. Everyone loved it! Well, almost everyone. I had one mom tell me “that isn’t right.”  I just smiled at her and her generic Little Mermaid.

To make Sophie’s DIY masterpiece, all I needed was cardboard, a light table cloth, plastic tableware, some small fake body parts and a hot glue gun. It was super inexpensive and actually really easy to make. I used the side of a cardboard box and cut it down to size. Cut a circle in the middle for her head to go thru. Then draped over the table cloth, glued it down and cut out the circle as well. Then I arranged my plates, cutlery and glasses and glued those down. Added body parts, some makeup, blood and crazy hair. I also glued a fake knife onto a headband, it was like the cherry on top, brought everything together exactly how I had envisioned! 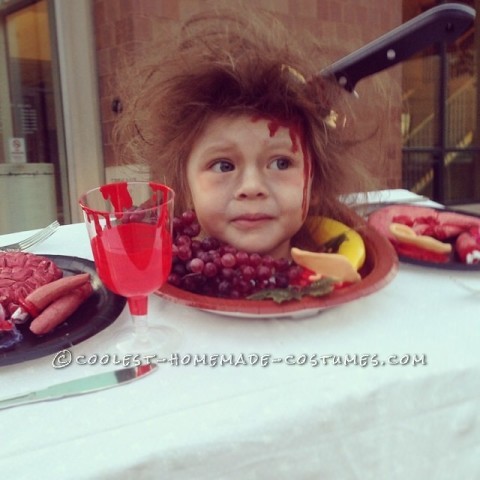 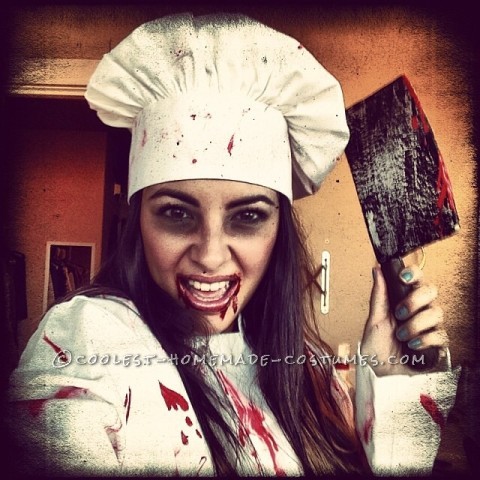