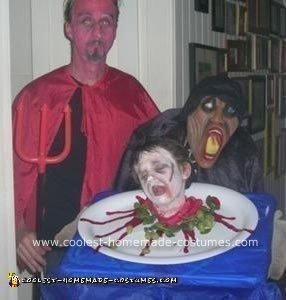 We used a backpack and put a flat polystyrene lid inside it and then put a carton over it and taped it to the back pack. This was the trunk of the Head on Platter Costume.

We then put stocking over the top of the carton and stuffed the arms (legs of the stockings) with plastic bags. We tried rags first but the whole thing was too heavy. We fashioned a plastic bag head, we put a knight’s hood from our dress up box to help shape it. You could use a balaclava maybe, then put a mask on the head.

We looped a sheet over our creepy man that reached the ground so was meant to cover the backpack and it to look like the legs were his and we sewed gardening gloves on the end of the stockings?

We cut a hole in another polystyrene lid large enough to put his head through, the gap is later is covered by a platter which we cut smaller hole in and slit up the back to get in and out of. Around the neck we put tissue and used tissue paper as a cover for the table cloth. We attached the hands by stitching them, but I must admit, the weight caused them to keep falling off. We decorated the plate with blood and spinach leaves and grapes.

My son was stopped by everyone in this costume and won the best dressed of the night. 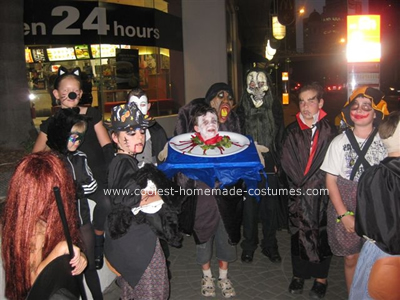 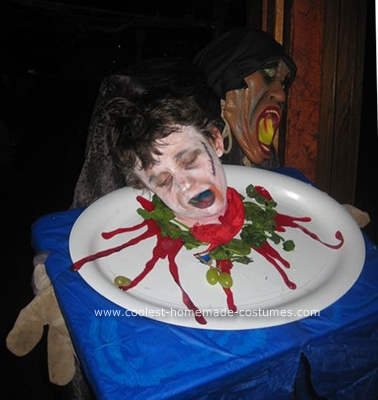 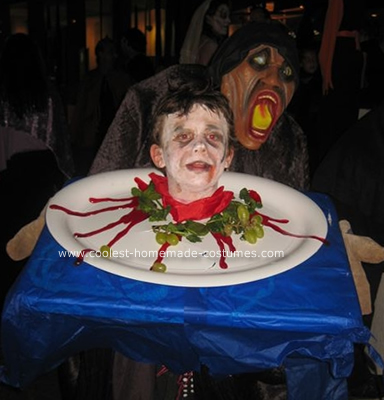