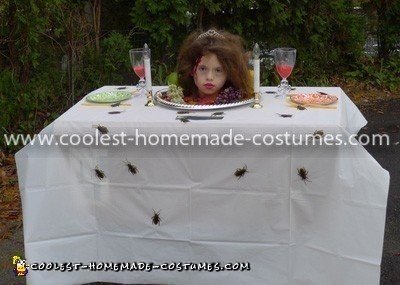 The Prom Queen Head on a Platter Costume was not difficult to pull together. We found a box that would work as a table – not too big as she had to be able to move and turn in it. We cut a hole in the center large enough to fit her head through. Bought a silver plastic platter from the party store and cut the platter in half and then cut the center out so that it would fit around her neck.

We glued colorful autumn leaves on the platter then topped with fake fruit. Next we glued a plastic white table cloth on the top. Super glued dessert sized paper plates and plastic forks and knives for the table settings. Found plastic goblets with skulls on the stem. Painted the inside with red paint then super glued the goblets as part of the place setting.

To add a little fun we used battery operated candles and glued on fake roaches. To keep the platter in place we used velcro — that way we could remove the pieces easily. For the face we used a very light foundation and light powder to make her pale. Then used charcoal eye shadow under the eyes and cheekbones and red lipstick on the lips.

Add a little fake blood, tease up the hair and put on a tiara and we were done. She received a lot of compliments. Cars were slowing down to get a look at her and people we didn’t know were asking to take her picture. We had a lot of fun building it together.