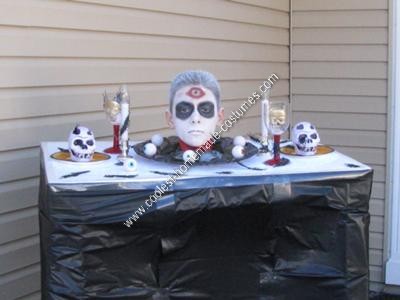 My son wanted to create his own costume this year and as a 10 year old had a challenging idea for me. He wanted to be what he called “The Table of Death”. We started with a large section of cardboard that measured 36 inches long and 21 inch wide. We cut a hole in the center for his head to slip through and it all spiraled out of control from there.

He decided that the table needed to be painted white with a lace doily. On top of the doily you will see Halloween plates, skeleton goblets and a center serving platter where his head went through with artificial leaves glued to it to act as garnish and cover up the hole in the middle of the table.

He wanted to have eyeballs on the table “Watching People” as he says, so we purchased a bag of ping pong balls and he painted each ball a different eye color and blood shoot lines to enhance their appearance. He then decided he wanted the table to be covered with bugs, additional skulls (besides his head of course) and candles, so we glued rubber roaches and centipedes to the table and battery operated skulls on the plates and candles (that both lit up) in the table center.

We had to cut holes into the cardboard table under the candles and skulls so he could turn them on and off from underneath. All worked well until we put the table on his head. At that moment we realized that we needed something to support the table on his shoulders so we built a full support system that attached to a belt around his waist to hold the table in place.

Finally, we covered the outside perimeter of the table with a black table cloth and cut two holes in the front so he could hold a bag for trick-or-treating. The project was fun and I got to spend priceless quality time with my son. 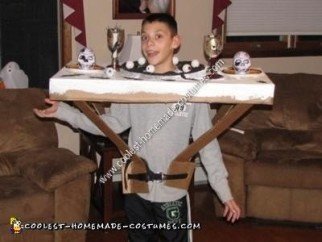 Creepy Corpse in a Body Bag and Coroner Couple Costume