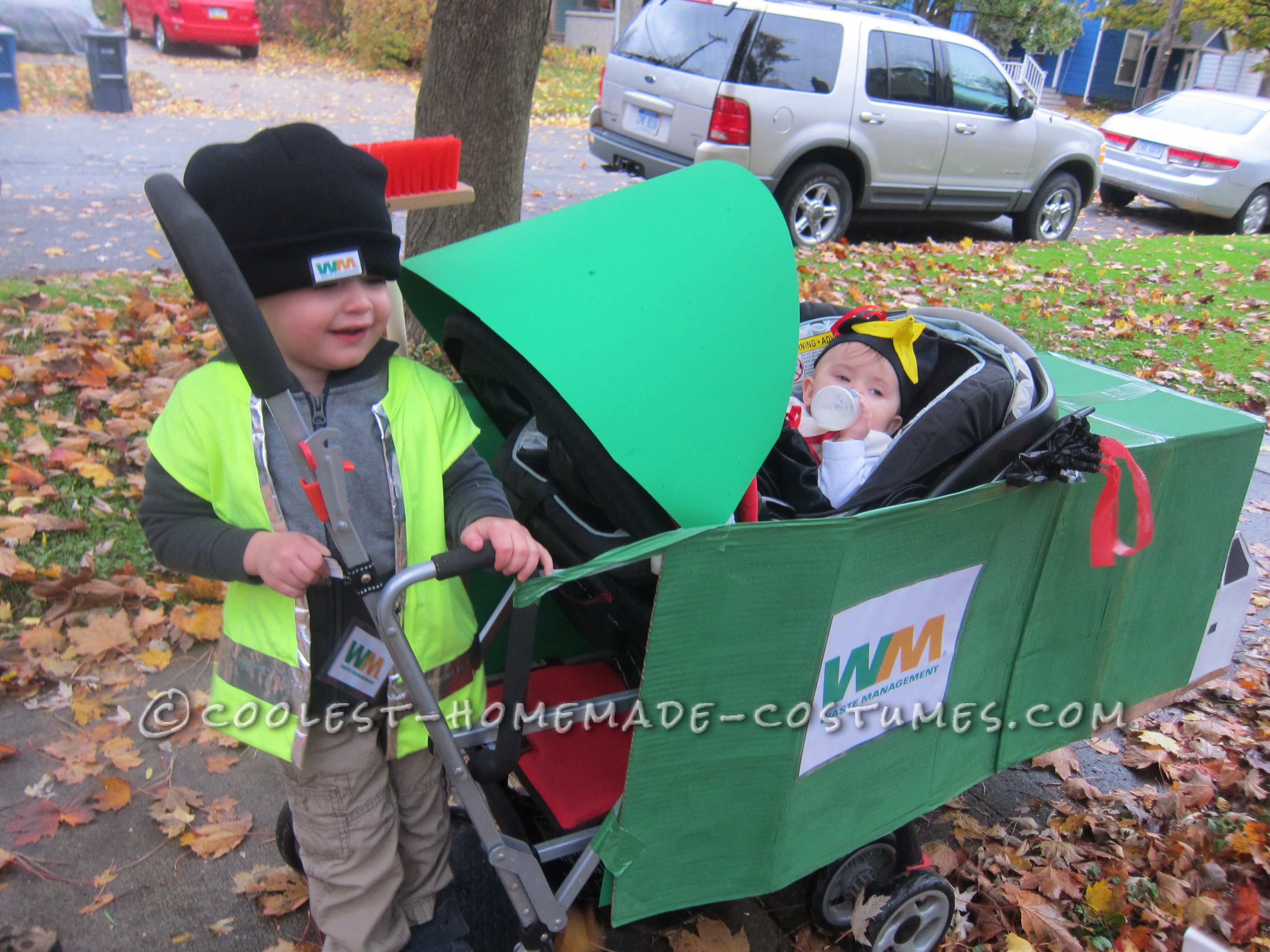 Our 3-year son has been obsessed with garbage trucks for quite a while. He watches garbage truck videos, he has toy garbage trucks, he asks us to rip up paper to make him “garbage” for the trucks. Sometimes on garbage day, my husband takes him out early in the morning, puts him on his shoulders, and they run around the neighborhood chasing garbage trucks. Some of the sanitation workers know them! So this year, we were not terribly surprised when our son decided he really wanted to be a garbage man for Halloween. We were trying to figure out a costume, and weren’t really sure how to make him look like a sanitation worker. We decided we could buy him some work gloves, have him wear cargo pants and carry a garbage bag, and hope for the best. That was the beginning.

We were also trying to figure out what our baby daughter could be for Halloween, and if there was a way to make this a sibling costume. My husband and son decided they wanted her to be…well, garbage. I was skeptical and wasn’t sure if there was a tasteful way to do this, and tried a few other suggestions, but we decided to think about it. Was there a cute way to dress a baby up as garbage? After consulting with some friends, we decided to go for it. Since we have a double stroller (a carseat fits in one area, and the older kid can stand on the back) we asked my son if he’d like us to rig the stroller as a garbage truck. He was super excited! He’d be able to ride on the back of the “garbage truck” and his sister could ride in the truck (as garbage!)

I went about trying to figure out how to get all this done. I bought some black garbage bags, and they had red handles. So I went and bought shiny black fabric and red ribbon and sewed our baby a “garbage bag” to sit in. I also bought her a black hat and tied more red ribbon to it. I made a little felt banana peel and velcroed it to her hat.

For my son, he basically wore his regular clothes, and we added a ski hat and gloves. I also made him a safety vest out of a neon yellow t-shirt and silver duck tape. (Thank you Google and Pinterest!) I printed out the waste management logo in different sizes and laminated them, to attach to his hat, his vest, and the truck. For the truck, i attached a bunch of different cardboard boxes together and painted them green and white. Green and silver duck tape also saved me! I added some details, attached the WM signs, and rigged the truck onto the stroller. Our son was thrilled, our daughter was happy, and a few people even stopped their cars to comment! We made it through Halloween! Until next year… :) 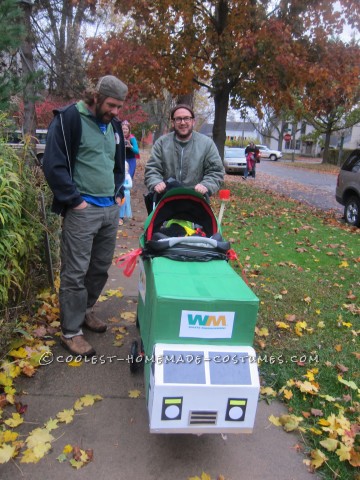 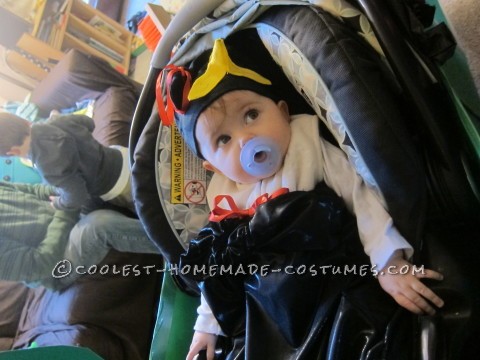 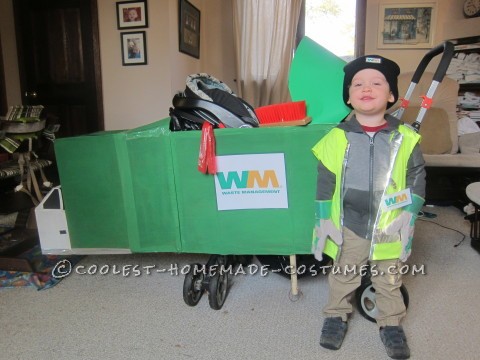 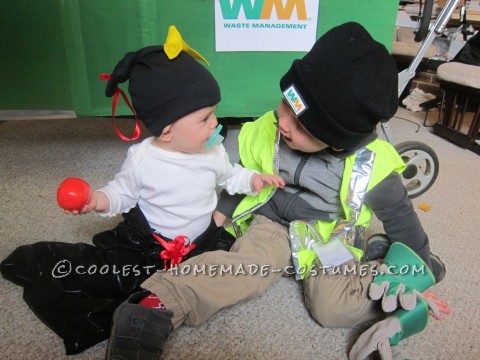 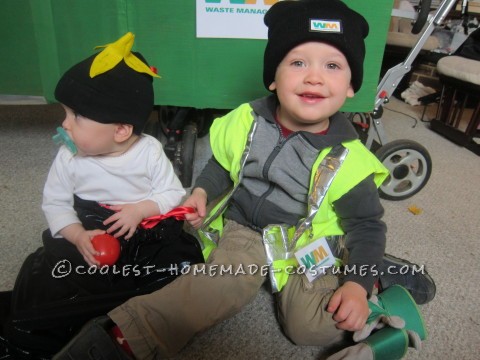 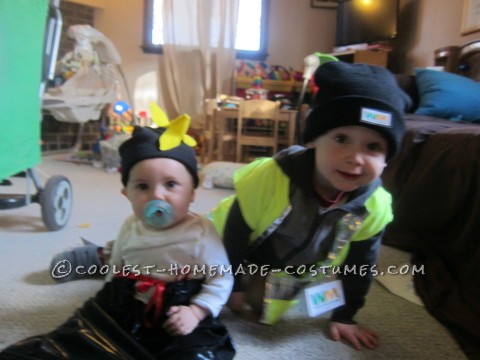 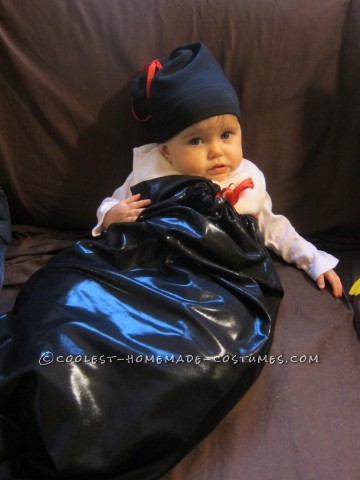 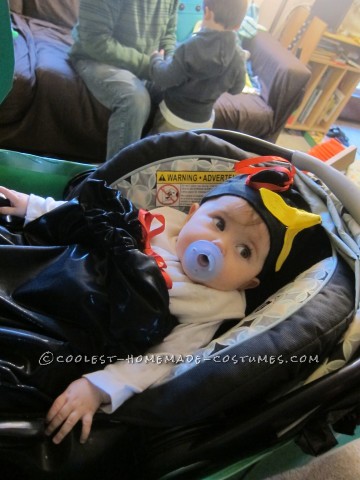