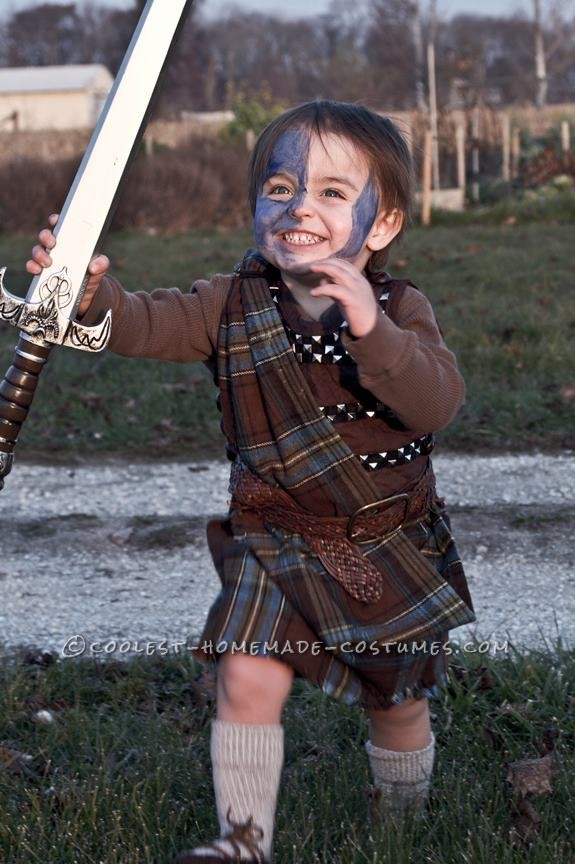 Our son’s name is Hank. He’s 100% boy. Any other name in the world simply would not have suited him. So when it came time to celebrate his first Halloween, we knew we needed to pick a suitably “manly” costume. After getting a coonskin cap from his Aunt J—-, the answer was obvious: mountain man.

But this story is not about how we created a bearded Daniel Boone complete with fringe, handkerchief and antler-closure man-pack—this is the story of how we proved to all the naysayers that we could top that. 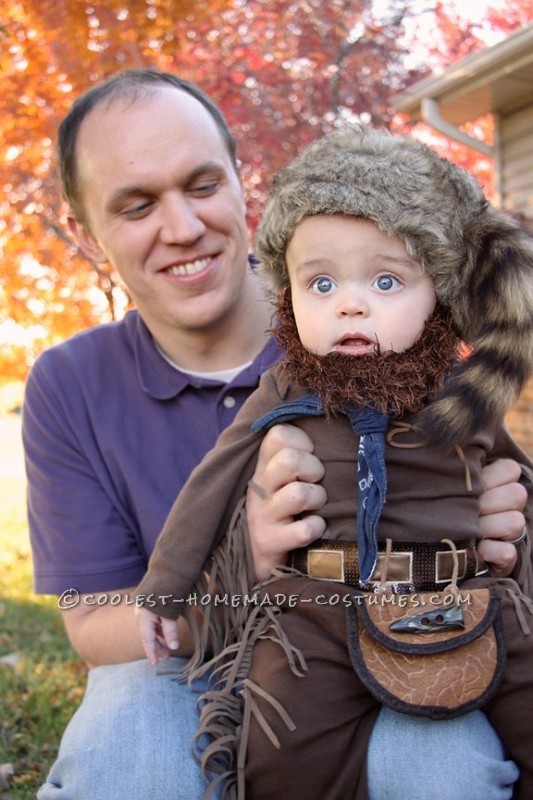 The costume to beat: Daniel Boone

Every rebellion begins with a spark

As Halloween approached, and friends and family were beginning to ask, “How will you create something as awesome as last year?” my husband and I knew we had to deliver. So, we decided to stay the course and create a series: Awesome Manly Historical Figures. We started throwing out names and ideas. We considered and eliminated a number of suitable candidates for one reason or another. Then, suddenly, it was as if there could be no other answer. We both burst out with “Braveheart!”

As this is one of my husband’s favorite movies and Hank has the same pure blue eyes as Mel Gibson, we knew this was it. We decided early on that historical accuracy was a niggling little thing and recognition among the general population was more important. So don’t hold it against us that our William Wallace was styled after the movie, not an accurate historical record.

To the war room

As in any great campaign, there must be a strategy. So, I set about pooling my resources and drawing up plans to execute this coup d’etats of a costume. I did Google image searches for movie stills. I found sites where you could order “authentic” adult Braveheart costumes for inspiration. I researched the proper way to make an ancient kilt and learned a couple techniques for pleating authentically. I began sketching and making furious notes about possible materials and construction techniques—keeping in mind that this had to be toddler-proof. It didn’t take long before I had the tactical foundation ready for action. 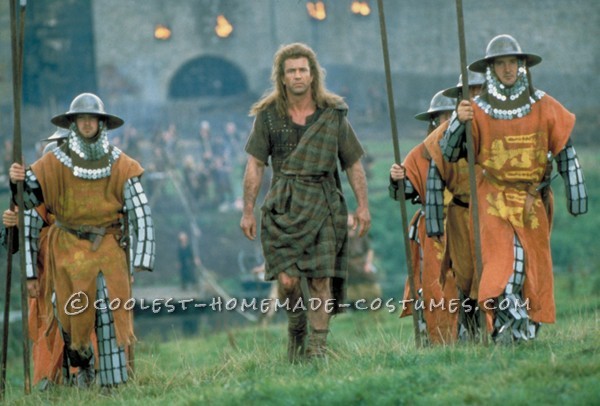 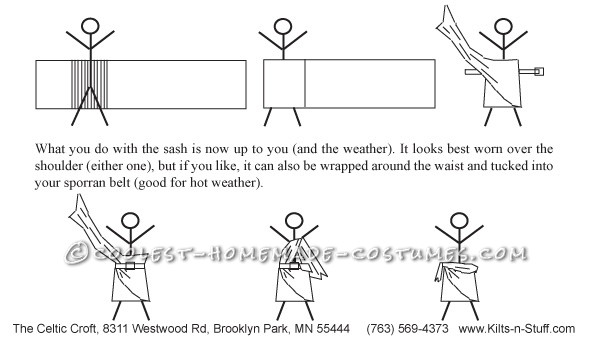 To re-create William Wallace á la Mel Gibson, there are two main wardrobe concerns to be created: kilt and armored vest. But these two items are nothing without the signature details and props—we’ll get to those at the end.

As I mentioned, I researched the proper technique for creating an ancient kilt and studied the different ways of arranging the pleats to get different looks in the final garment. The first logistical challenge was that an ancient kilt was simply wrapped around the wearer and held in place by a large belt. I knew that my active toddler wouldn’t make it to the first neighbor’s door before a kilt of this sort was ripped off!

Having a bit of sewing knowledge in my back pocket (thanks, Mom!) I had an easy-to-execute idea. Here’s how the kilt came together:

The armored vest was the second sewing challenge. In the movie, Wallace wears a studded leather vest made up of numerous padded sections. I knew right away I could substitute pre-quilted fabric to the get the reinforced detail look. I also knew I could get studded trim ready-made at the fabric store (thanks Emos/Hipsters/Punks for creating the demand). I just had to figure out how to get this thing to fit over my kid’s large head while still fitting snugly—without the benefit of stretch material. I decided that the answer was NOT trying to fit it over his head. In the end, I made independent front and back panels that buttoned together with faux-leather-wrapped buttons at the sides and shoulders. Here’s how I got a great fit and clean finished edges on the armored vest:

As I said above, the costume really comes together when you add the finishing touches. There were a few ready-made pieces to support the custom kilt and armor: 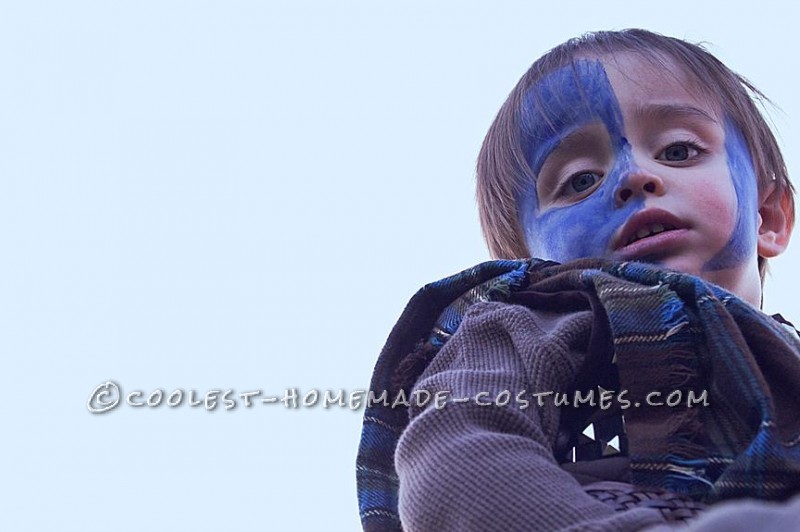 Detail of the war paint

Once we hit the streets with little Wallace in tow, we took no prisoners. All our friends and family raised a white flag without even fighting. Our little man stormed the Halloween battlefield that night and came away the victor!

The only problem now (again) is coming up with something for next year! 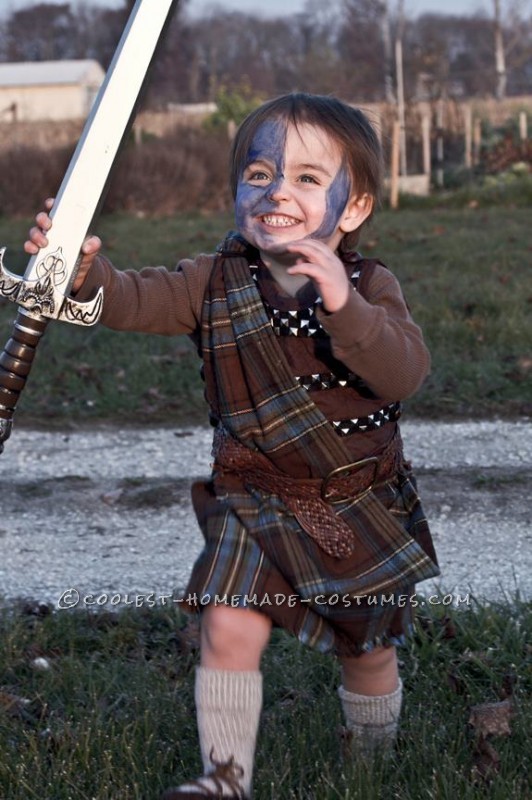 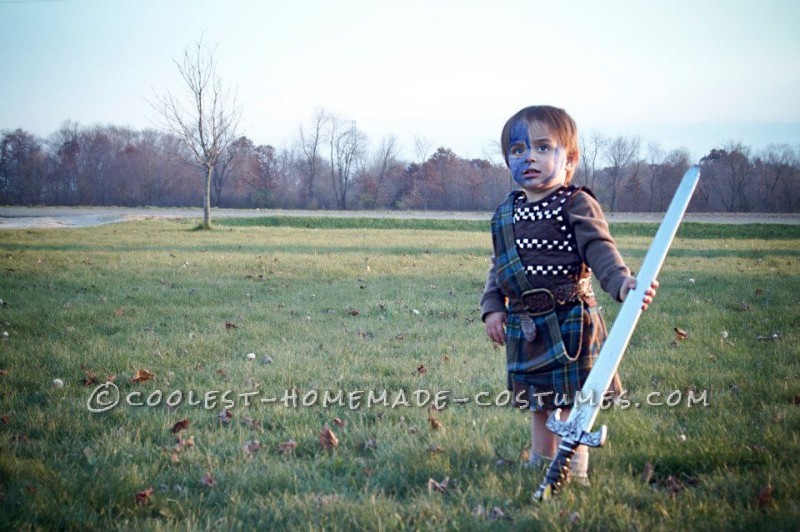 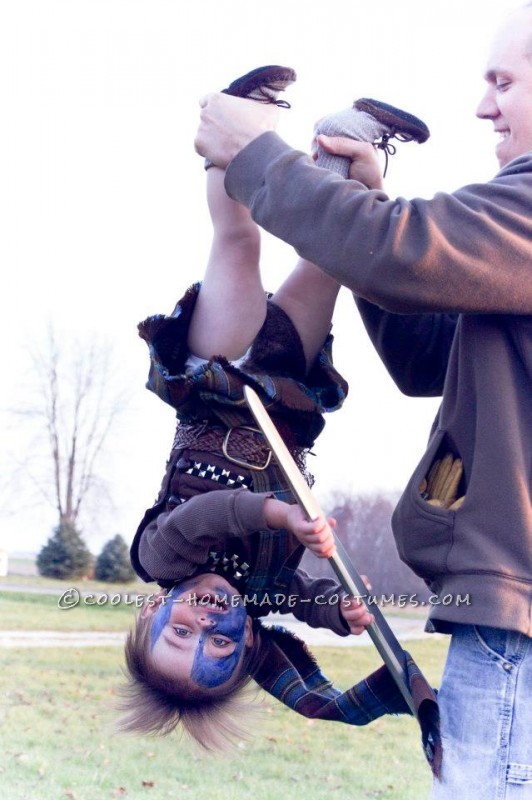 4 thoughts on “Just a Boy and His Broadsword: Transforming a Toddler into William Wallace (aka Braveheart)”