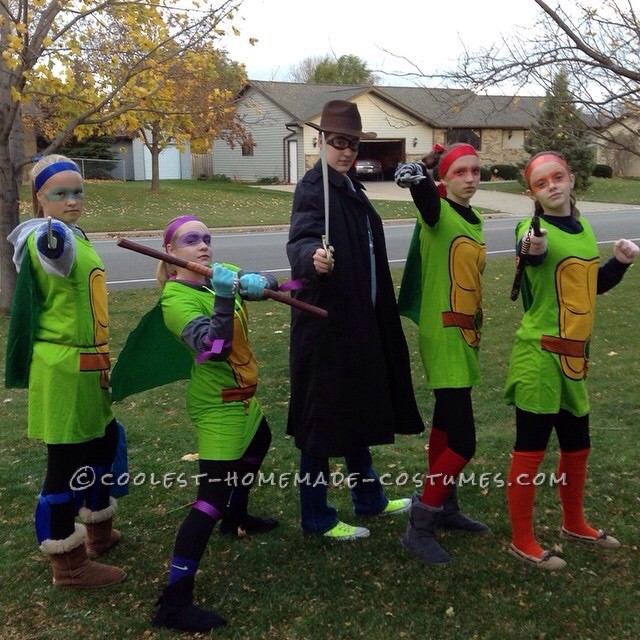 The teenage mutant ninja turtles costume started out as an idea for our group of foursome for movie characters day during homecoming week. However, being high school students who don’t yet have the ability to drive the plans (and materials) didn’t quite come together in time. We decided to give it another go round once Halloween came up.

We went through Pinterest numerous times but still couldn’t find a variation that would be A: cheap enough (we don’t have jobs either), B: easy enough to put together in a weeks time, C: warm enough to spend Halloween outside in Wisconsin, and D: most importantly, looked good. As you might have guessed this proved to be a bit of a problem. So what we did was took a couple designs that both looked like they might partially work and mashed them together.

We decided that with only three days till Halloween the homemade aspect of the costume wasn’t gonna happen, so we cut some corners. I was nominated to go out and buy the different materials we would need which wasn’t really decided at that point, we just had to see what we could find and make do with that. I liked the ideas we had gotten from Pinterest so I tried to buy things that would go along with that. But after six stores and too many shortages to count, I changed my mind. I grabbed everything turtle related that we could possibly use and piled it into the cart.

I had everything from footie pajamas to t-shirts  to colorful ribbon in the cart by the time I was done. I took it all home and laid it out and started taking pictures to send so we could figure out what we were gonna do with this thing. We immediately ruled out the expensive costumes, the odd costumes, and the ones that would be too cold until we were left with, my favorite and the best and final option, some turtle night gowns with attached capes. The only problem was that I was only able to scrounge up two of those and we needed four. So I got in the phone and started calling all the Walmarts in the near area. I did finally manage to find two more which we arranged to pick up the next day.

Fast forward two days to Halloween night. We finally got around to assembling the costume on ourselves as we got ready for trick or treat. The only problem was that we had acquired a fifth member to our group that morning. She had a costume, but we didn’t want to have our group costume and then have her just all on her own. So we modified a bit. She had a big trench coat and hat, and we had and extra pirate sword as well as a black face paint. Batta bing batta boom! You’ve got yourself a ninja master.

Through out the three or so hours we spent trick or treating the costumes held up really well from a visual standpoint as well as a warmth one. The only problem we had was the people with the simpler gloves had cold hands and a couple “headbands” fell off as well as some sliding “knee bands”. All-in-all I’d say it was a pretty successful costume. Here’s what we did –

Now here’s how you do it: