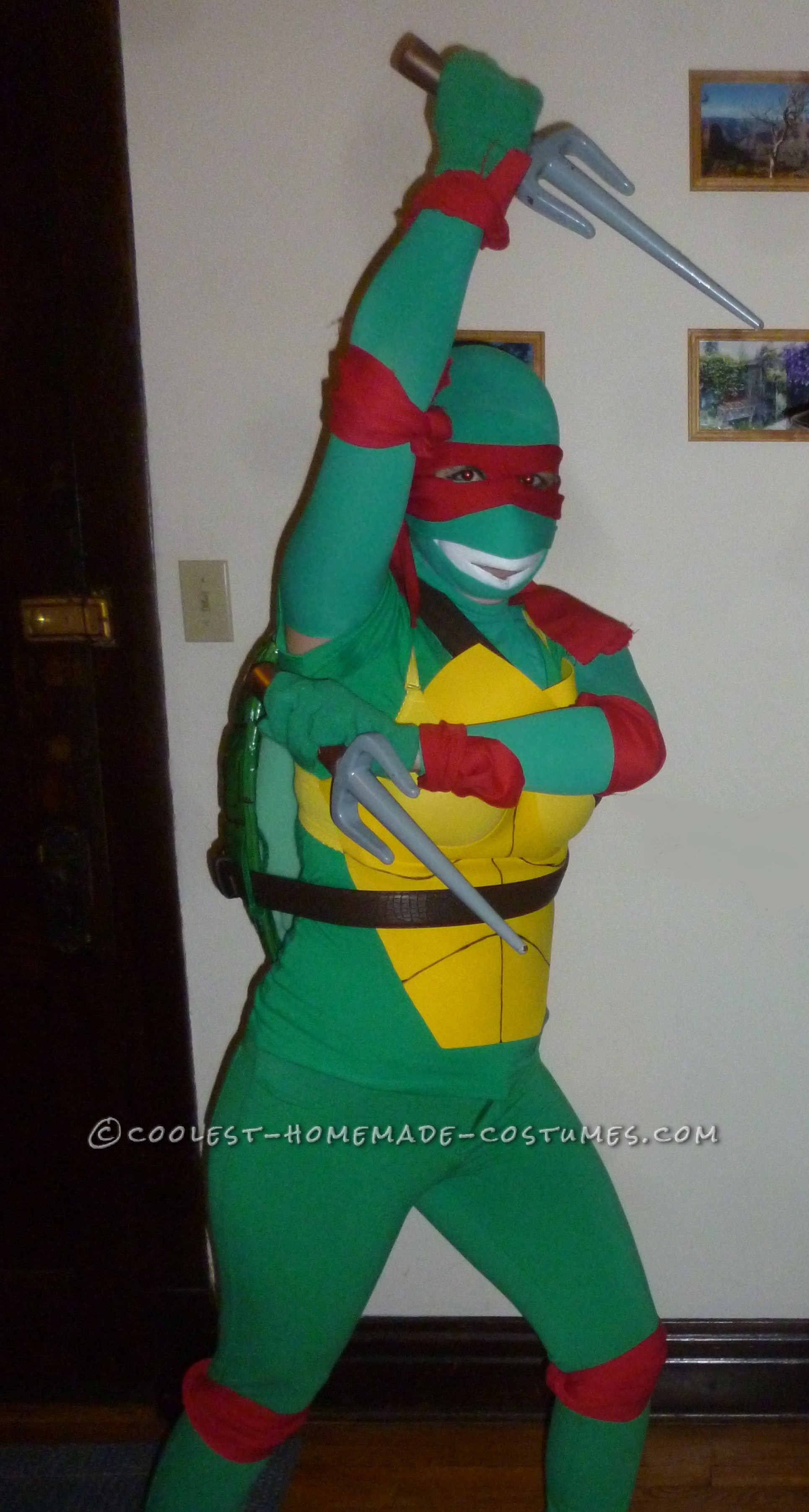 I have always loved TMNT ever since I was a kid, so I thought it was finally time to be a ninja turtle this year.  I’m not sure what motivated me, perhaps I saw a cheesy attempt at a turtle costume and thought I could do better, or perhaps I saw a thanksgiving turkey pan somewhere and was inspired, or more likely some weird combination of the two…

I was a lone turtle, because I just moved to Chicago and don’t have a cosplay posse here just yet. So what better turtle to be than Raphael, my favorite, the loner, the badass. And I just really like the color red! 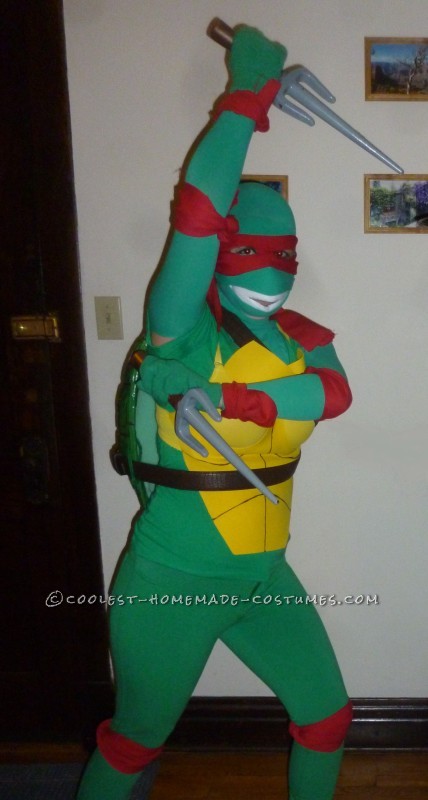 Shellecting the parts and pieces

Accessories/Extras
— at least half a meter of red fabric, a meter would be better
— a doctors mask
— green eyeshadow
— two brown belts
— two sais

How to make it: ‘a little too Raph’

I started with the back shell because it would take the longest to make. I took each turkey-pan and rounded out any unturtle-like patterns in it, by hand. Then I cut pieces of the foam rubber sheet into shell plate shapes and taped them losely onto the outer part to mask the turkey-pan shape. With the two of them fitted snugly into each other and the foam rubber taped on, I started covering the whole thing with the green duct tape, making sure to angle it so that the tape folded in neatly to the creases to minimize wrinkling. Once the tape was applied, I painted in the gaps between the plates and painted concentric circles inside each plate to look more realistic.

For the front shell, I cut the sheet of yellow foam-rubber to fit under the wire of the bra and glue-gunned it on, and then shaped it to my own body, and finally drew the plates on with marker. I glued on the top pieces as well, and shaped them once they were in place.

For the torso, I could only find a green t-shirt, so I had to make the arms with little girl tights, and the neck area as well was made of another pair of slightly larger little girl tights cut up and placed sideways around my neck and draped over my chest and under the t-shirt.. And the green jeans required no special effort. For the hands, I tucked in the middle and pinkie fingers of the gloves, and stuck my fingers two by two into the remaining glove fingers for the perfect 3-fingered turtle hand effect.

Then I buckled the two belts together and wrapped them around the shell and myself, so that one loop was over my shoulder and the other was around my waist, and both loops around the shell. The I twisted the pipe cleaners through holes I made in the shell and around the belt in three places to keep the belt and shell from sliding around.

For the head/face I used the doctor’s mask and cut a slit in the front for the mouth, and so I could drink and breathe. Then I put the third pair of little girl tights over my forehead above my eyes and wrapped them around the front of my face to cover most of the mask and tied the ends in the back, and left the mouth part open in the middle so it would look like teeth!

And lastly, I cut the red fabric into different sized strips to make the mask, and wrist, elbow, and knee pads. I put them on, tucked my sais into my belt and voila! — Raphaela, the Gril Ninja Turtle! 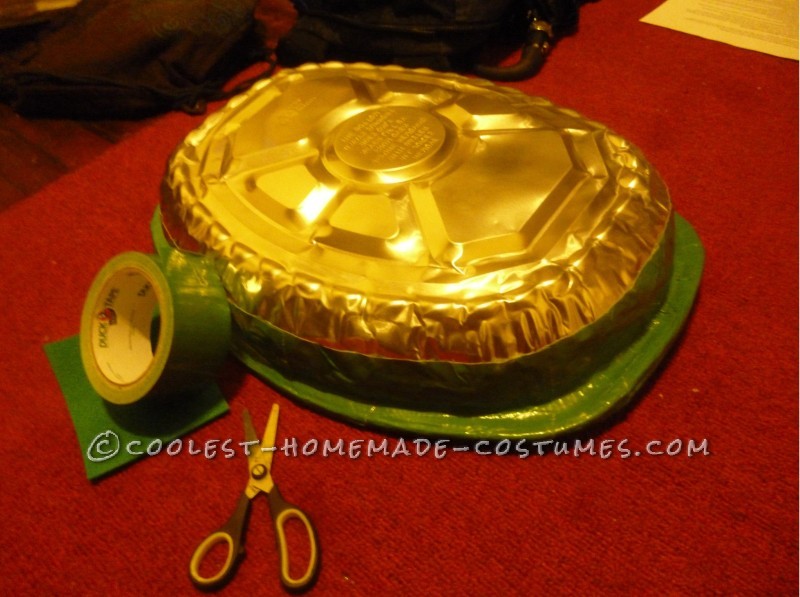 Making the Back Shell 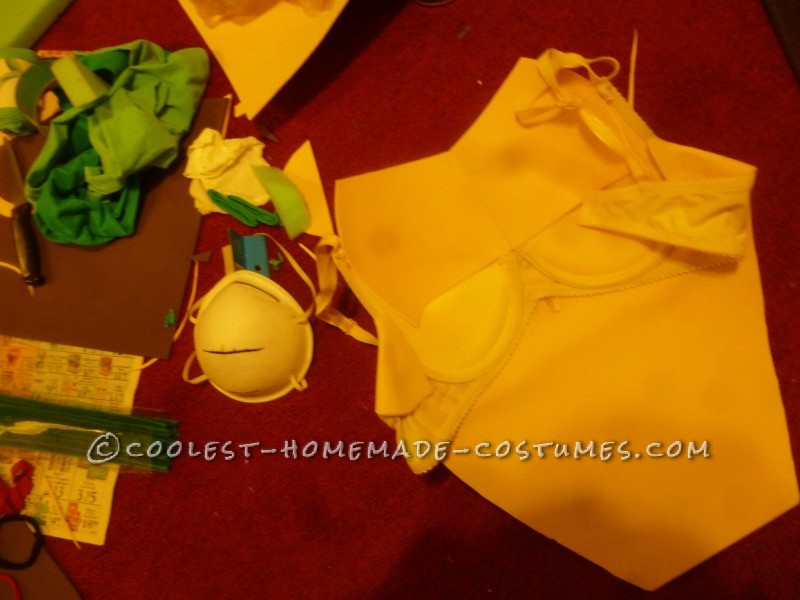 I got a crazy awesome reaction by people on the streets!! People shouted out things like ‘Cowabunga’ and ‘Turtle Power’ to me all night. Got lots of high fives, or high ´threes´ as I called them. And people flipped out when they saw that I actually had ‘three’ fingers. Tons of people asked me for a photo with them, both on the streets and in the bars! And everybody wanted to dance with me too, haha! People loved it!

I don’t know which I like more, making my costumes or wearing them, but this one came out awesome and is definitely one of my best! It was funny too, no one being able to see my face, after the first few photos I realized that I didn’t even to smile. And drinking was hilarious, because I had to drink my beer through a straw.  But it was totally worth it, I had a blast going out in it!! 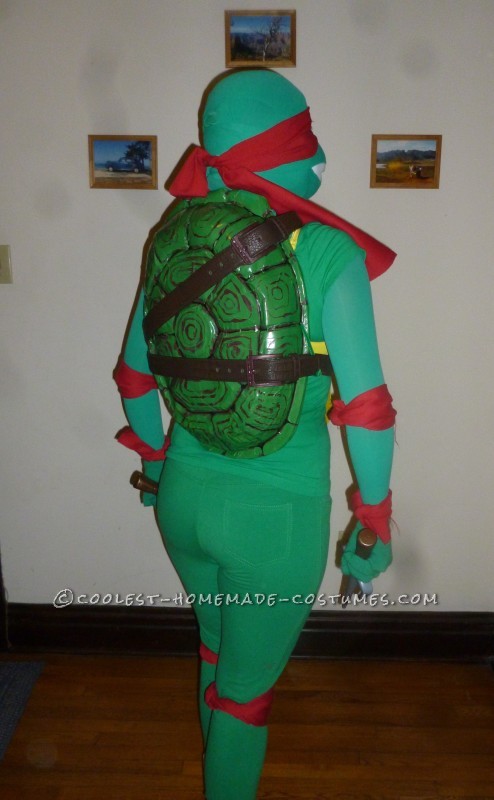 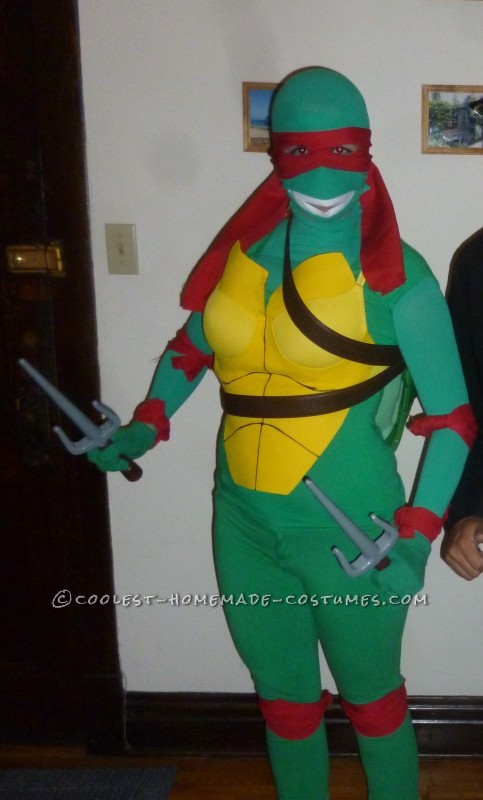