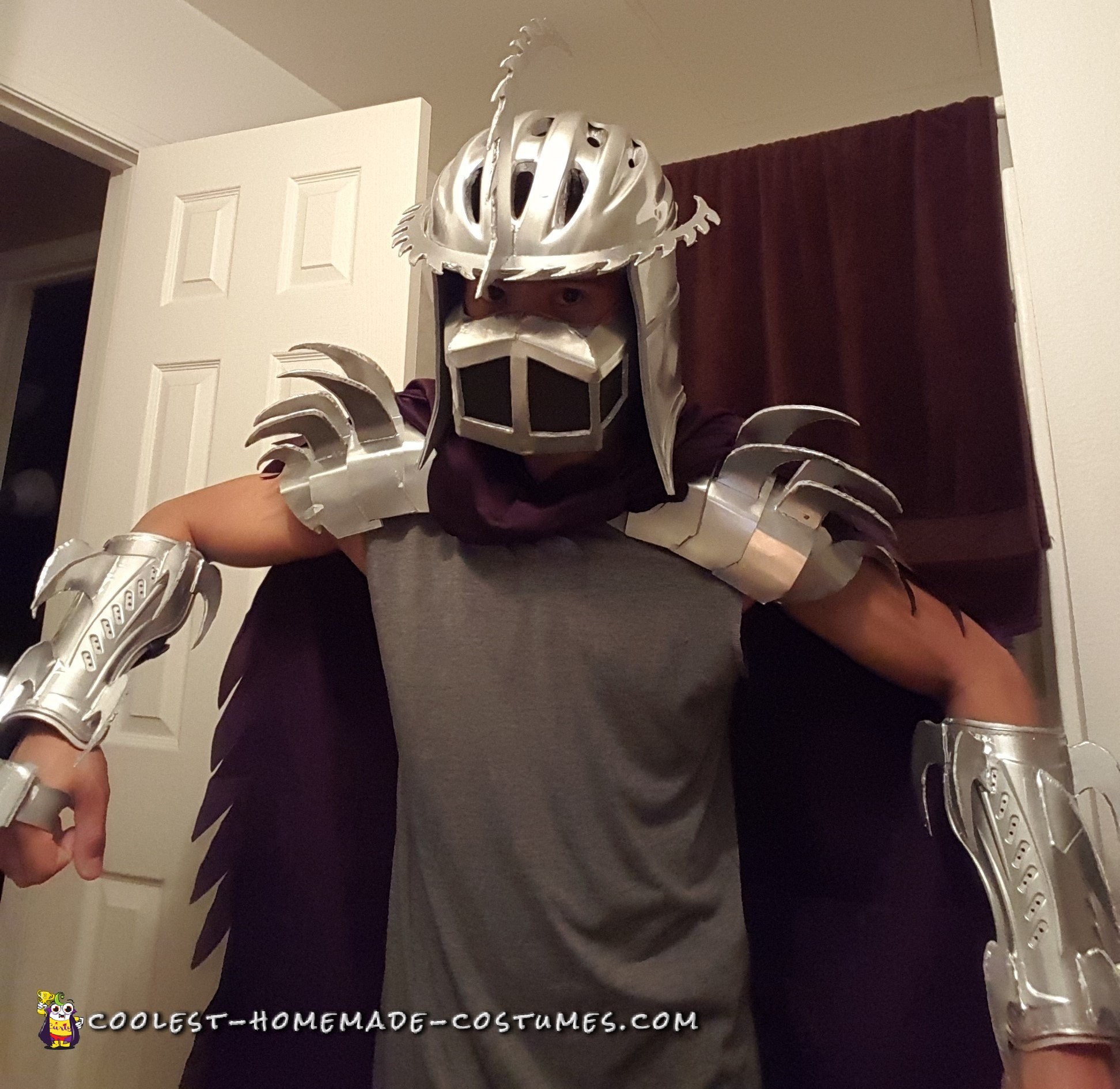 Once October came, I originally decided to be Rick “Wild Thing” Vaughn from Major League, but after seeing his jersey was over $150 on eBay, I went to plan B: Operation Cheaper Costume. I figured I’d try a DIY, and the total cost of this costume was right around $100. I wanted to be a character who was widely recognized, but not overdone. I thought about cool/funny characters from my childhood, and my thoughts finally landed on “The Shredder” from Teenage Mutant Ninja Turtles.

After browsing the internet for Shredder costumes, I noticed most people made it themselves. Honestly, I felt only a few did a really good job, so I took it upon myself to go above and beyond to give one of my favorite childhood villains the prestige he deserved. I took the basic cartoon concept and put my own twist to it.

One thing that made it easier/more interesting was the fact that there were dozens of different versions of the costume, so I felt like I couldn’t go wrong if I chose to make my own version of the helmet, and likewise with the different blade shapes or shoulder armor.

Initially, I figured I could just buy some sports equipment, cut out a few cardboard blades and glue them on, spray paint it silver, and be done with it. Seemed simple enough. Little did I know it would take nearly 30 hours(!) to complete. I wasn’t even sure what the exact designs I wanted to go for were. I’m no pro, and this was the first time being this detailed on a DIY. I thought it’d be wise to do a few drawings of what I wanted the final result to look like, so concept art and prototypes probably accounted for half of the hours. But once I got the ball rolling, I kept impressing myself (and others apparently) along the way. With each piece made, I would send pictures to my friends to see what they thought, and received support and constructive criticism.

The first reactions I got were from friends. They seemed very impressed with my initial designs, but I believed they were just being supportive, and not as thrilled as they came off. After receiving a good amount of likes on an Instagram post of the helmet and gauntlet’s initial stages, I could feel it was going to be a hit, and couldn’t wait to finish the rest of it. A house party of 75 people was my first stop the day before Halloween, and I’ll cut right to the chase – I won the first place prize of the costume contest with a rousing applause.

While it seemed to get a ton of attention at the party with questions about how I made it, and comments such as “that costume is on point”, it didn’t compare to Halloween night. My friend and I casino-hopped around Las Vegas and with each stop, I almost felt like a celebrity. People were stopping me seemingly every 10-15 minutes with either an enthusiastic comment or asking to take a picture with me. I should’ve perfected my poses in the mirror beforehand, but did have the go-to “boxer pose” with the simple fist up, as seen on one of my submitted photos. I kind of wasn’t ready for this much attention, haha.

A little tidbit I want to add is the fact that I adopted (the cartoon) Shredder’s deep, menacing voice with never-ending insults. It was fun saying stuff like “Where are those mutant morons Bebop and Rocksteady?” and “Curse that wretched rat and those blasted turtles!”

This nearly month-long project was worth all the time I put into it. With each passing day, I was reminded how much I loved art back in grade school. I hadn’t done anything artsy in a long while. I’ve also been encouraged to enter contests (such as this one) and have been told that costume-making or arts and crafts in general could be my calling.

After my two-day Halloween weekend was over, I decided I would perfect this costume even more over the next year since it was so well-liked. I’m thinking about some cool accessories to get an even better reaction or using actual metal and welding the pieces so I won’t have any wardrobe malfunctions!

Lastly, I wanted to explain the green screen photos. Upon discovering this online contest, my friend (Tony Stark) thought it’d be fun to incorporate a few (obviously amateur) green screen effects. I thought they came out pretty awesome! Well, except for the dojo one. 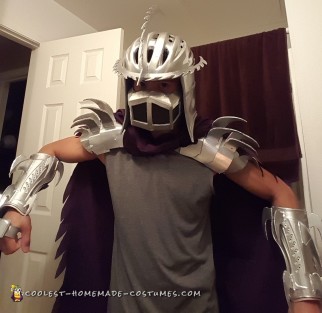 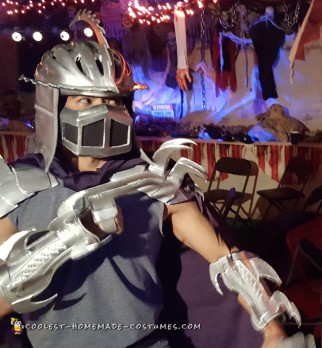 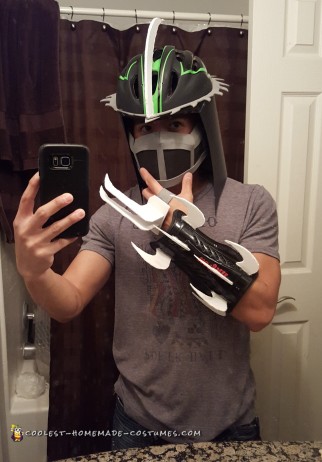 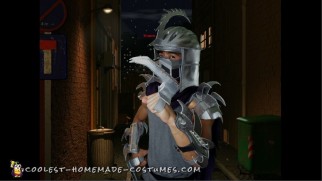 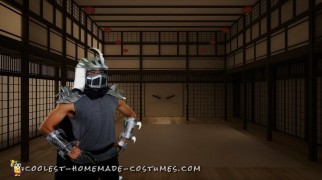 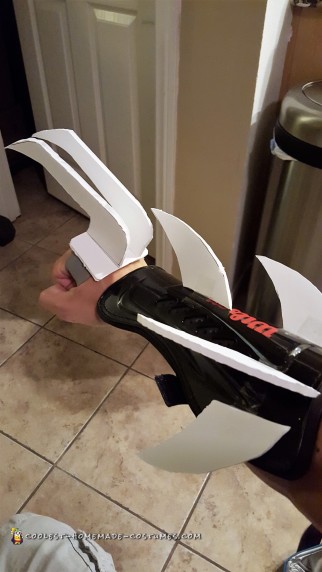 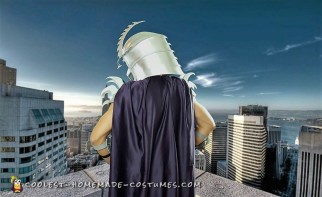 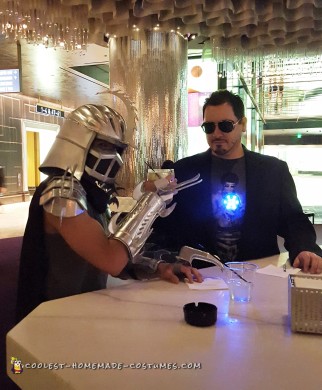 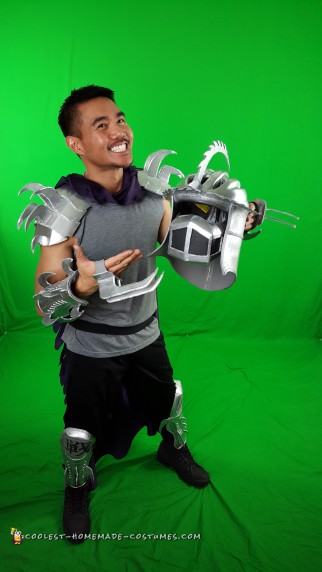 2 thoughts on “The Shredder Costume from Teenage Mutant Ninja Turtles”