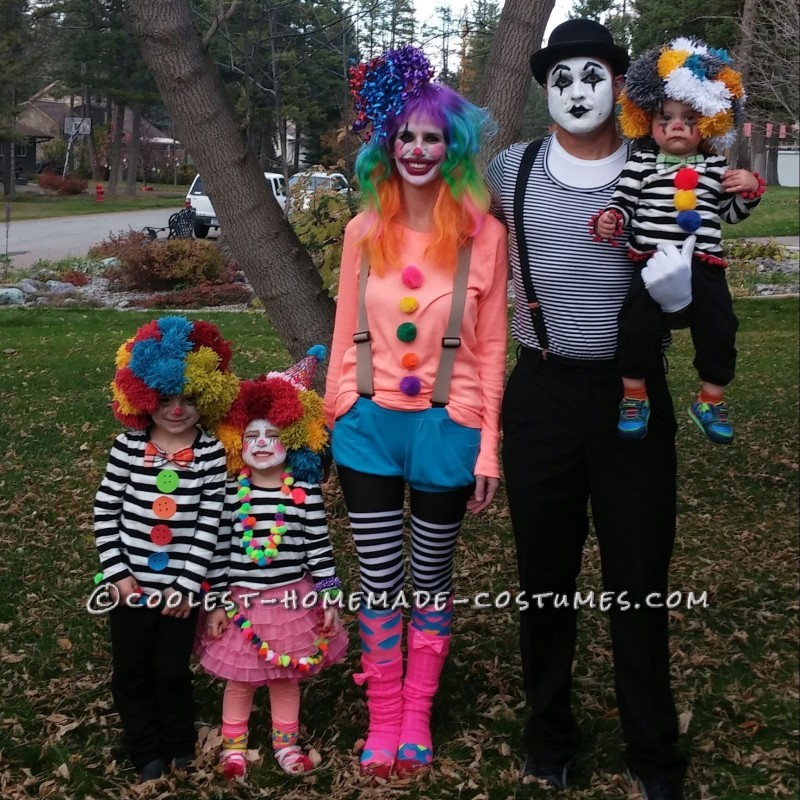 These costumes were so fun to make, but a lot more work than I anticipated at the same time! The kids’s wigs were made by pom poms that were individually wrapped around my hand 80 times of piece, tied off, then cut.

Each pom pom was hot-glued onto a cheap stocking cap from Walmart. The biggest hat took about 60 pom poms, and the two smaller ones each took about 45 a piece. It took me about three hours per hat to make. I also had a lot of help from our new kitten, you can imagine how fun that was! The rest of the outfits were just pieces I put together by thinking what mine/clown babies would look like if they existed. I started off the entire project by making the little clown hat on Evelyn’s wig. It was all dollar store crafts stuff. The hat is part of a birthday hat package, the jewels were part of a gem sticker sheet set, and I just used ribbon from around the house to finish off the bottom. The kids’s shirts were from Target including my husband’s (which funny enough is actually a woman’s shirt, I could not, for the life of me, find a black and white shirt for a man in any men’s clothing!) from there I just did a lot of Pinterest research. I looked for tons of kids clowns outfits and tons of mime outfits and just gathered up a bunch of ideas that I liked as far as makeup and design goes. As simple of an idea as it seems, or looks, it was really hard to control myself in not overdoing it, especially when it came to the boys’s outfits. I wanted to make sure that there was still enough mime in their outfits that together as a whole we made sense as a family in costume. When I was finished with the outfits, and had all the kids in them and their makeup on before we went out to trick or treat, I thought to myself that people were going to love those outfits, but I hardly expected the attention we got. So many people stopped us to ask if they could take pictures. We did enter the costume contest, though I’m not sure if we won or not because the judging is done by pictures they took of everybody, over the weekend. If I had to guess, there’s a big chance we won. The outfits were so popular and creative and there was nobody else out there like us. I think my crowning achievement in this whole project is that I didn’t actually find this idea on the Internet, I just thought it would be really clever to make my husband of mine and me a clown and make our kids a mashup of the two of us. Turns out, I was right!:) oh, and most importantly, I DON’T SEW a stitch, literally. Not a stitch! This was a done with my best friend’s hot glue gun! 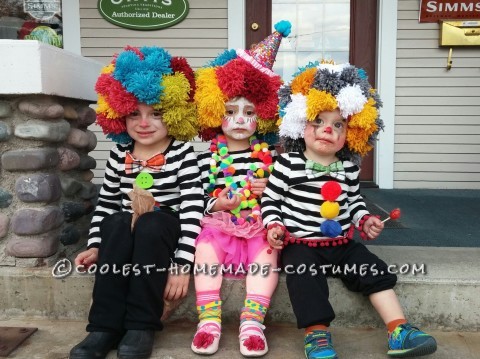 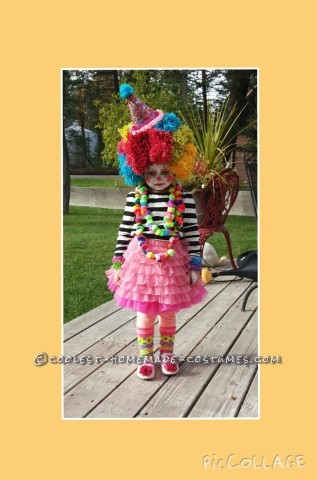