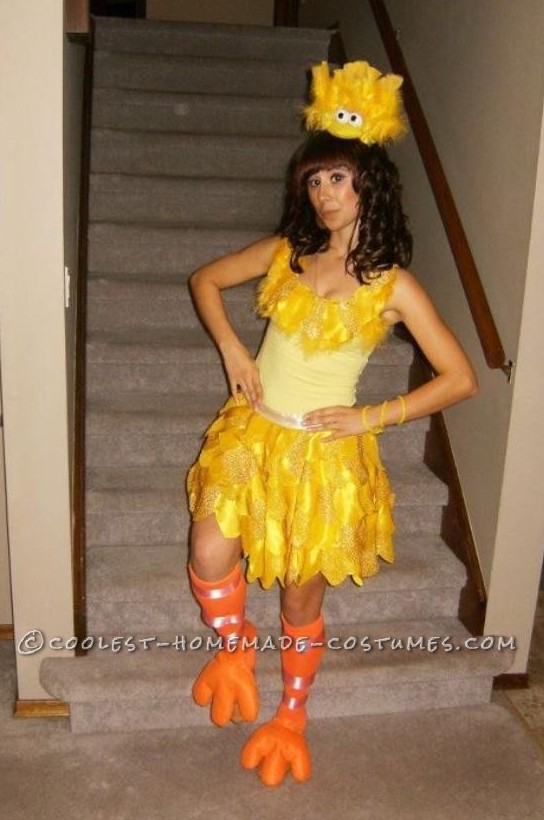 A few years back I purchased a store bought Halloween costume, and like most others was INSANELY disappointed by the poor quality, see through material, and overall mashed appearance from poor packaging and shipping….as such the following year I DID NOT make the same mistake and so began adventures of homemade costume making (let me tell you I bit off a little more than I could chew)

I convinced a friend of mine to help me make a mermaid costume (modeled off of a store bought costume, which we all know never comes the way it looks).  Best part I couldn’t sew to save my life so countless hours were spent together with a jammed sewing matching which in turn led to a late late pre-Halloween night of costume construction.  Not going to lie though it was an AWESOME costume (which I will share another time).

The following year rolled around, another great homemade costume idea (flamingo) this time designed more my skill level and it was a great success, and the evenings celebration is where I met my soon to become super awesome homemade costume partner!

Halloween Homemade Costume YEAR 3 rolled around and my new buddy decided a homemade group costume was a must and our Sesame Street costumes were born!

What I needed to make this costume:

I will start by noting we purchased a few things and enhanced them to make these costumes.  To start we did order the headpiece which was attached to a headband from an online costume store and of course they were a little sad looking SO I got out my feathers and glue gun and beefed it up!!

Next step was to draw and cut out of the cardboard a “tracer ” that would be used to draw out the “feather shaped petals ” onto the material.  Then we spent 2 evenings drawing and cutting out what seemed like hundreds of  “petals ” for my skirt and top.  Once everything was cut out we laid the skirt out flat (so the top of the skirt was face up) and positioned the petals starting with the bottom edge.  Once the petals were place we got out our trusty glue guns and started gluing down each petal.  This process was repeated over and over until we got to the waistband of the skirt.  Best to try and alternate your petals, gives a great effect.  We then took some white fabric (had it kicking around) and again glued it to the waistband of the skirt to cover the uneven edge of the petals.  Once the skirt was done I put on the skirt and did a very vigorous shake test and spot glued any loose petals. (Got to be able to dance all night!)

Next up was to jazz up the shirt.  I laid out the shirt and used the remaining petals to add to the front and back of the neckline.  I pinned them down then VERY CAREFULLY put the shirt on and made any adjustments to accommodate for my body shape before VERY CAREFULLY taking the shirt off again and glue gunning down the adjusted petals.  Then I took to my bag of feathers and glued away.

Now for the true task..Big Bird ‘s feet!  No costume is complete without some awesome cartoony feet! I took my large piece of orange felt folded it in half and traced out a foot pattern and cut it out.  I glued the edges of the two pieces together (similar to how you would sew a pillow) but made sure to leave a space near where Big Bird ‘s heel would be to be able to stuff later.  I let them dry over night to ensure they were good and solid (for those who sew you have a competitive advantage here…no drying needed).  The next day I flipped the felt feet inside out and stuffed them with the pillow stuffing and glued the opening shut.

Then I put on my orange leg warmers and had my costume buddy measure out the circumference of  my leg in the 3 places I wanted to have the pink stripes.  We then measured twice and cut once the 3 stripes.  I knew I would ‘t be able to slip these on and off with the ribbon so we stapled Velcro on to the ends of the pink ribbons and glue gunned the end with the fuzzy side of the Velcro to the leg warmers where they needed to be placed.  We were going to a Halloween party so I would need to be wearing shoes, so I then cut 2 small slits in the bottom of the plushy feet and ran a string through the plushy foot and tied it around the bottom of my actual shoe.  To make sure the plushy foot stayed attached to the leg warmer once my shoes were on we ran a strip of glue where we had sewed the food shut and pressed it down around the front of my ankle and headed out!

We got rave reviews on our awesome group costume!! It wasn’t a complicated process but was for sure time consuming to get everything ready for assembly!

And there goes out first successful homemade costume adventure together!  Round two last year was another gooder (you may have seen her awesome deer costume on here too!)