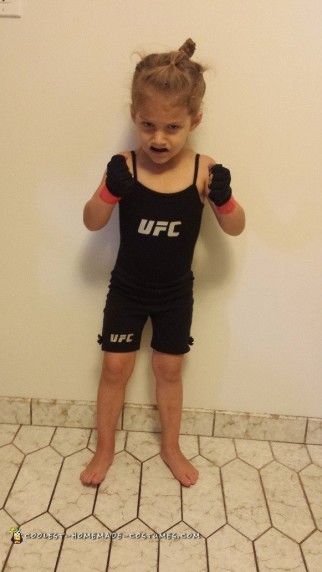 Here’s three-year-old Elsa’s Ronda Rousey costume. She loves boxing and took a liking to UFC as well. She loves to watch ‘Wonda Wousey’ fights, and is pretty disappointed that they aren’t typically very long.

I used a black leotard and black shorts with an iron-on UFC logo that I had to draw, cut, place and iron, which was the hardest part of the costume. Black cotton gloves cut off at the fingers with red duct tape wrapped at the wrists. Black mouthpiece that my daughter hated. :)

Elsa’s hair is also pretty close to how Rousey wears it during a fight. Top it off with that angry mug and you’ve got a pretty accurate Ronda Rousey costume.