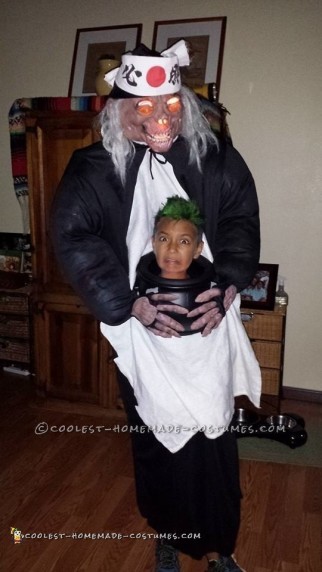 The costume began its life in a car ride with my son on a yellow sticky note.  He wanted to make his Halloween costume last year and began with a basic sketch of the Headless Horseman.  I looked up, “how to make a Headless Horseman costume”, on Pinterest as I remembered my own childhood dream of making this type of costume character.  I was soon introduced to a new type of costume called the Illusion costumes.  This type of costume motivated us to further our research on ‘how’ we could make this costume while not spending a great deal of money.

We gathered all the methods and equipment people used to make their various costumes and tried to analyze what was common about all of them and what could we use for ours.  The problem we initially had to solve was that the weight of the costume had to be manageable for a 9 year old boy’s endurance and size.  The project soon became similar to the movie ‘IronMan’ as Tony Stark had to solve the numerous issues that developing a suit of armor would cause.

The costume’s main issue was the structure that my son needed to wear under the costume to create the correct illusion.  The structure issue caused us to change from a Headless Horseman to a ‘Chef holding my sons head’.  We tried a baby back pack, PVC piping, tape, and straps, but none of these would work either due to weight or balance problems.  We ended up with a small basic back pack to hold a lawn game’s piping that was much lighter and allowed us to create the height that we needed without the weight that he could wear on his back to allow him to ‘trick or treat’ without difficulty.

We went to Walmart and bought a scary rubber mask and hands, an adult XL costume robe, glow sticks, and a big black plastic caldron.  We like the Food Network and thought of a scary chef costume to create as our final design.

We fit the costume on him many times to see what would ‘fail’ so that we could solve the numerous issues that came up.  He put on various parts of the costume over 50 times to solve the height, the head and limb mounting, and a host of other issues to make this costume realistic.  We enjoyed the challenge as it reminded us of all the ‘trial and errors’ that Tony Stark did to build his super suit.

On Halloween, we fitted the inside of the caldron with glow sticks to look like his head was being ‘simmered’ in the pot.  The costume was so realistic that some adults had a hard time looking at him while others couldn’t believe their eyes.  He even got the best compliment of them all…he heard some little girls say that it was ‘gross’.   I was so proud of him and as we stayed out for 2 hours and received a lot of candy and photo requests.  His yellow sticky from the car came to life that night.  As Einstein once said, “Imagination is more important than knowledge “.