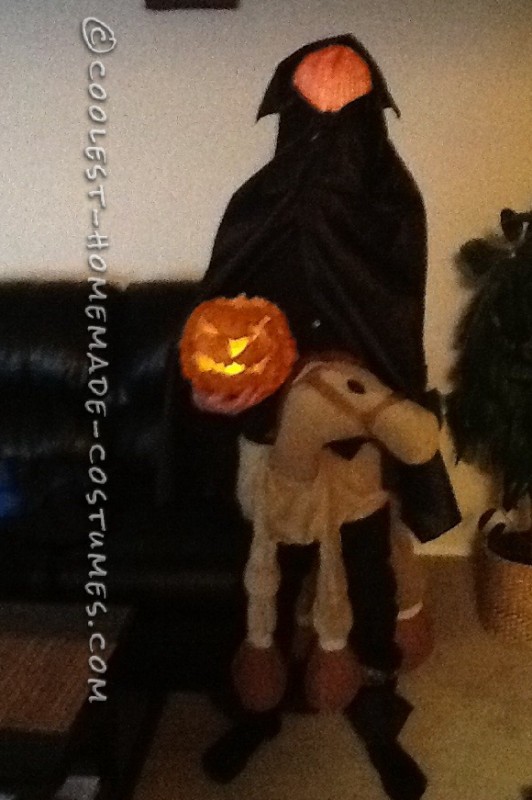 Well first off my 12 year announced that he wanted just a horsehead to wear for Halloween? I thought to myselff, where on earth am I going to find that. I have always been a creative kind of person, so I began looking around second hand clothing stores for ideas. It didn’t take me to long to find the horse from “Toy Story”.  Great! I thought well, I might have to modify a bit… but at least it’s a horse. My son was excited! We tried everything to make it suitable. This just wasn’t going to work. That’s when we came up with the idea of the headless horseman. Back to the second hand clothing store I went. I found black pants, black shirt, black boots. I made the cape. I also went to the dollars store and bought a cream coloured winter hat. I took a red magic marker and made swirls of red all over the hat. This now resembled the top of his neck with blood looking veins.After we put his hat on we tied to cape around his forehead. This now gave the appearance of no head. I carved out a small pumpkin and put a battery operated candle inside. He carried it under his arm. The horse itself you could step into, which made it appear that you were riding it. It was perfect.And this is how we came up with this idea. He had many compliments on his Headless Horseman costume. 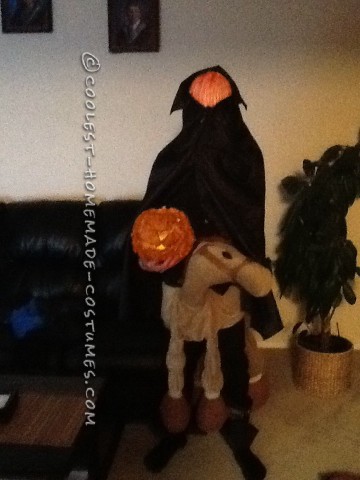